Dexter Gordon - To Lester from Dexter with ... Cheese Cake 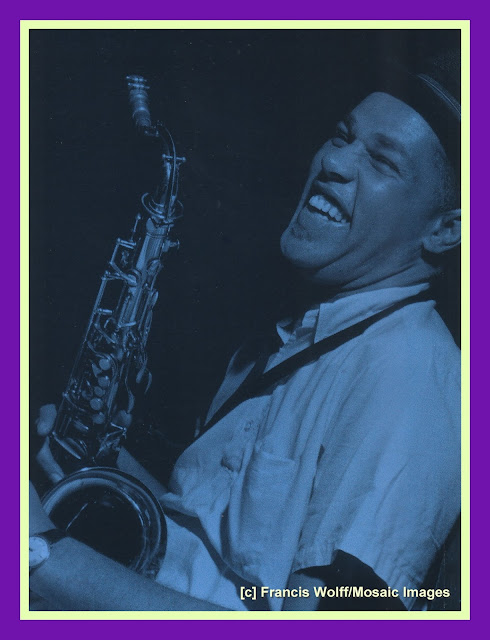 "I FIRST HEARD DEXTER GORDON ON A 78 RPM SAVOY SIDE "Settin The Pace;" a co-led date with Leo Parker on baritone. I was 14 years old at the time and I played this record until the surface turned to powder. Within a few years I had a small trove of Dexter on Dial and sundry independent labels. Later it was the Dexter Blue Notes contained in this retrospective (among the very favorites in my collection to this day.) Although I never saw him perform during this period, he became a real musical hero for me. He told beautiful stories with every solo. His sound was larger than life. The very essence of modern jazz, the very definition of hipness, and my favorite tenor saxophonist of them all."

"Love, warmth and sheer joy are all present in Gordon's sound and attack. It can be heard and felt in the tremendous drive of his up tempo work, the width and depth of his ballads, or anywhere in between. All these affirmative qualities are reiterated in this album. There is also evidence of change, harmonically, in the playing of a man who was known for his harmonic awareness back in the mid-Forties. This is the kind of record that has you starting again from side one, track one, immediately after you have played both sides in their entirety."


I could listen to Dexter Gordon play the tenor saxophone all night.

There was a time in my life when I often did.

Dexter made a batch of LP’s for Alfred Lion’s Blue Note label in the 1960s and his playing on them was a revelation.

His solos on these recordings were exciting and explosive, his time hard-driving and impeccable and his sound was big and wide-open.

Dexter’s ideas and inventions flowed so effusively that I couldn’t keep up with them; I couldn’t absorb them.

Anything that came into his mind came out of his horn; effortlessly.

Coleman Hawkins, Lester Young, Sonny Rollins and John Coltrane received more public notice, awards and accolades, but Dexter was right up there with all of them.

When Jazz went to Europe to live, so did Dexter, performing and hanging out in Paris and Copenhagen for most of the last two decades of his life.

By the time of his triumphant return visits to the Village Vanguard in NYC and Keystone Korner in San Francisco in the late 1970s, he had become a different player; more laid back, lyrical and laconic, but still a force to be reckoned with.

Here are a few thoughts and observation about Dexter from Garry Giddins’ marvelous five-page essay on him in Visions of Jazz: The First Century [pp.330–335]:

“The King of Quoters, Dexter Gordon, was himself eminently quotable. In a day not unlike our own, when purists issue fiats about what is or isn't valid in jazz, Gordon declared flatly, ‘jazz is an octopus’—it will assimilate anything it can use. Drawing closer to home, he spoke of his musical lineage: Coleman Hawkins "was going out farther on the chords, but Lester [Young] leaned to the pretty notes. He had a way of telling a story with everything he played/' Young's story was sure, intrepid, daring, erotic, cryptic. A generation of saxophonists found itself in his music, as an earlier generation had found itself in Hawkins's rococo virtuosity. …

Gordon's appeal was to be found not only in his Promethean sound and nonstop invention, his impregnable authority combined with a steady and knowing wit, but also in a spirit born in the crucible of jam sessions. He was the most formidable of battlers, undefeated in numerous contests, and never more engaging than in his kindred flare-ups with the princely Wardell Gray, a perfect Lestorian foil, gently lyrical but no less swinging and sure. …

Gordon was an honest and genuinely original artist of deep and abiding humor and of tremendous personal charm. He imparted his personal characteristics to his music—size, radiance, kindness, a genius for discontinuous logic. Consider his trademark musical quotations—snippets from other songs woven into the songs he is playing. Some, surely, were calculated. But not all and probably not many, for they are too subtle and too supple. They fold into his solos like spectral glimpses of an alternative universe in which all of Tin Pan Alley is one infinite song. That so many of the quotations seem verbally relevant I attribute to Gordon's reflexive stream-of-consciousness and prodigious memory for lyrics. I cannot imagine him planning apposite quotations.”

Bruce Lundvall and Michael Cuscuna collected all of the albums that Dexter made for Blue Note into a six compact disc, boxed set that includes some omitted tracks along with photographs by Francis Wolff and selected commentary.

It’s great to have all of this music by Dexter in a digital format and it provides a convenient means to sample the music of this Jazz giant if you are not as yet familiar with it.

In line with Gary Giddins’ characterization of Dexter as “The King of the Quoters,” Dexter composed an homage to Lester Young by making a few minor [literally] chord alterations to “Tickle Toe,” an original composition that Lester made famous while performing with Count Basie’s Orchestra.

Dexter entitled his piece “Cheese Cake” and you can listen to his performance of it on the audio track to the following video on which he is joined by Sonny Clark on piano, Butch Warren on bass and Billy Higgins on drums.

To experience the sheer joy and delight of a brilliant Jazz tenor saxophonist “at work,” you can’t do much better than Dexter’s solos on “Cheese Cake.”