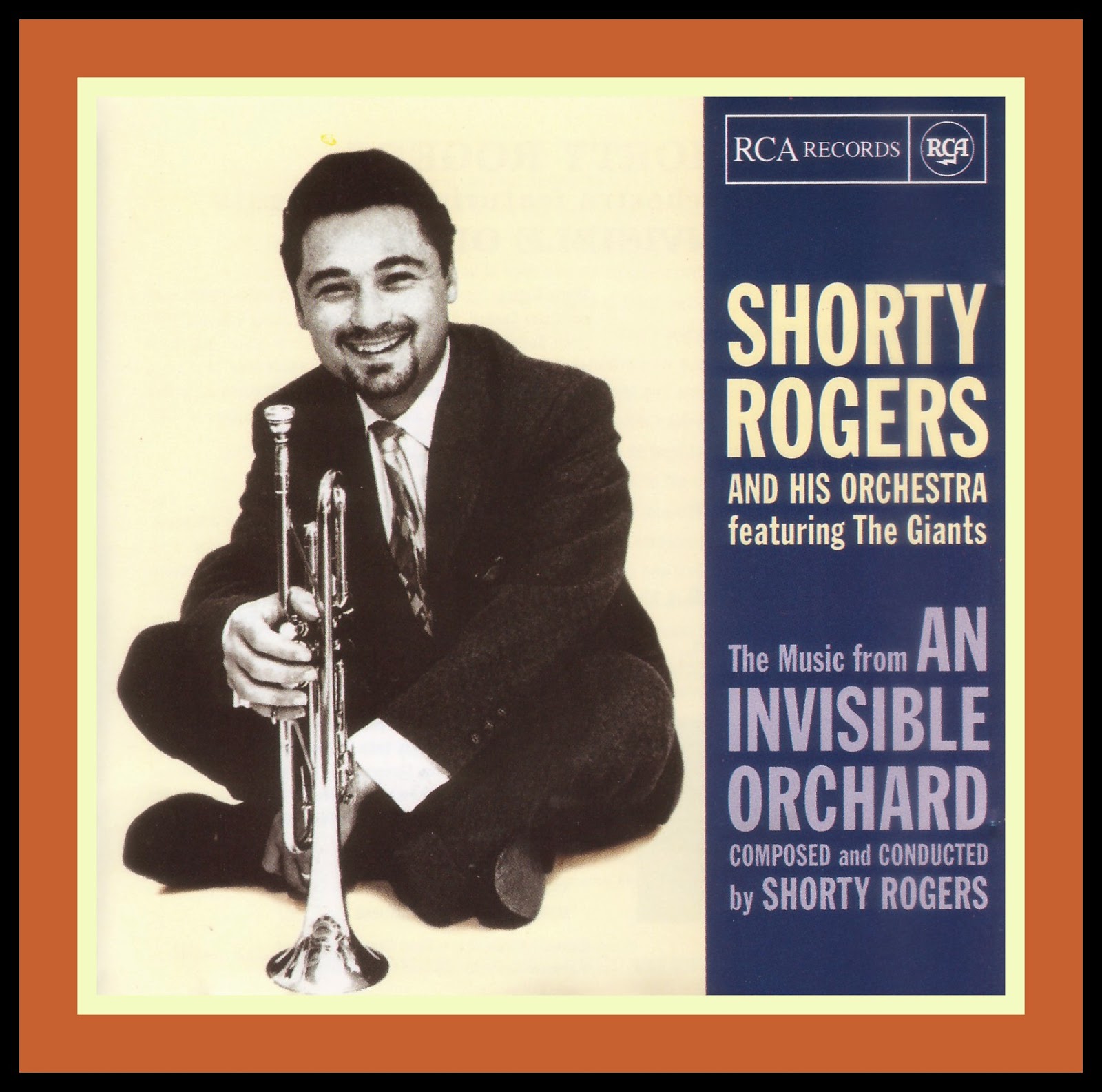 At one point in my life, the music of Shorty Rogers was anything but “invisible.”

Heck, I came of age as a Jazz drummer during the heyday of Jazz on the West Coast with Shorty as one of the recognized leaders of that supposed “movement.”

Larry Bunker, my drum teacher, was among Shorty’s closest friends and often worked in his small group, Shorty Rogers and The Giants, and on many of Shorty’s studio recordings. As a result, I was often around Shorty as Larry’s invited guest. We “hung out” together on a number of occasions and he hired me to do some commercial studio work for him.

In the Spring of 1961, flute and alto saxophonist Paul Horn and vibraphonist Emil Richards were raving about a new LP they were recording with Shorty at RCA. [Emil was a member of Paul Horn’s quintet from around 1959-1962.]

The untitled album never came out and by the late 1960’s both Shorty and much of Jazz on the West Coast had disappeared.

As Ted Gioia explains in his seminal work on the subject of West Coast Jazz, Modern Jazz in California, 1945-1960:

“ … [Shorty’s] arrangements could swing without ostentation; his solos were executed with untroubled fluency; his compositions seemed to navigate the most difficult waters with a relaxed, comfortable flow that belied the often complex structures involved. Rogers's lifestyle, in its refusal to call attention to itself, followed a similar philosophy. While many of his colleagues on the West Coast found it easier to make headlines through their counterculture ways than through their music, Rogers had little to do with such excesses. He paid his dues and his monthly bills with equal equanimity. This was perhaps too cool. Rogers was easy to take for granted.

Rogers's visibility in jazz has been further hindered by his virtual retirement from performing situations since the early 1960s. …. Rogers recorded prolifically between 1951 and 1963, only to fade from the scene afterwards. …  Rogers [had not ]actually left the music world; … [he]simply applied … [his] skills elsewhere, in studio work or academic pursuits. But to the jazz community this was tantamount to retirement.

In reaction to Rogers's retreat into studio work, some jazz fans have been even less generous. They have viewed this change in careers as nothing short of treason, a betrayal of the serious music Rogers had once strived to create. But no matter how one interprets Rogers the musician, his lengthy absence from the jazz world has meant that his work, once widely known, is now largely unfamiliar to many jazz fans and critics.”

Shorty Rogers passed away in 1994 at the age of seventy.

Thanks to the efforts of Jordi Pujol, who is based in Barcelona, Spain and who owns and operates Fresh Sound Records and a number of associated Jazz record labels, much of Shorty’s music has once again become “visible” in reissued CD formats.

Jordi, bless his soul, even released the Shorty big band sessions that Paul Horn and Emil Richards were raving about “back in the day,” while providing this background about them in the sleeve notes that he wrote to accompany the CD.

Shorty Rogers and His Orchestra featuring the Giants: AN INVISIBLE ORCHARD [RCA 74321495602].

“After having produced several reissues during the last fourteen years of some of the great albums Shorty Rogers made for RCA, it's now time to present one of the most valuable treasures that have remained unreleased in the RCA vaults.

I've been very fortunate to have been good friends with Shorty, and to have had his collaboration in some projects for Fresh Sound Records. Shorty himself gave me a cassette of these sessions, with all the enclosed discographical information, with the hope that the album would finally see the light of day. This album was entirely written by him, and conceived as a suite with the title of "An Invisible Orchard", and was possibly the most personal and ambitious project he ever put together.

It was the last album he recorded for RCA, after having been associated with the label from 1953 to 1961, except for the year 1955 when he went to Atlantic as musical director. Unfortunately the policy of RCA at that time resulted in the recording being put on hold for commercial reasons. They felt it was not the kind of music the public was expecting to hear at that particular time, ten years after

Shorty had established his name and figure as the head of the so-called West Coast Jazz school, and the new trends in jazz caused the company to feel that the album did not fall within their current plans. As a confirmed Shorty Rogers fan, I'm grateful to the RCA archives for having located the master tapes, which has given me the opportunity to produce this CD. However, I feel sad that it arrived too late to make Shorty himself happy, for more than anyone else he deserved to see this CD issued. This should be not only a memorable and momentous jazz event but a major homage to the man and musician who was admired and respected by the entire music world. God Bless You Shorty Rogers!”

You can order the CD directly from Fresh Sound Records by going here.

The following audio file features Shorty's arrangement of Inner Space, The solos are by Harold Land on tenor sax, Shorty on flugelhorn, Emil Richards on vibes, Frank Rosolino on trombone and Pete Jolly on piano. The drummer is Mel Lewis and the lead trumpets are Al Porcino and Ray Triscari. It is the opening track of the Invisible Orchard CD.