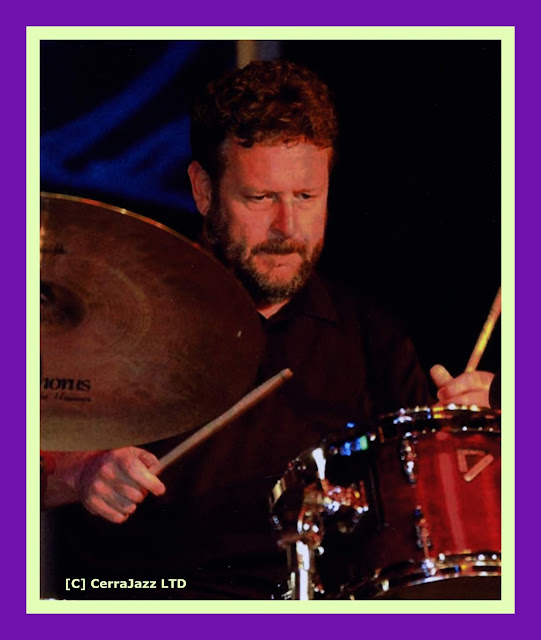 When we listen to a big band, what we hear is a formed tonal entity - the whole equaling the sum of its parts.


The composer-arranger gives the tonality its form through the structure of the notes given to each instrument to play and these are further shaped into various melodies and harmonies throughout the piece.


But there is another element “shaping” the sound of the big band as its plays the arranger's "charts" - the drummer.


Jeff Hamilton, who has been a premier drummer on the big band scene for the past four decades, beginning with Woody Herman in the 1970s, Bill Holman in the 1980s and continuing through to today as a co-leader of the Clayton Hamilton Jazz Orchestra, explains why this is so in the following excerpt from Bill Dobbins, ed. Conversations with Bill Holman: Thoughts and Recollections of a Jazz Master, a work we plan to review in its entirety.


"The first I became aware of Bill Holman was through his charts for Buddy Rich's band. There was a certain sound that Bill had that I wasn't aware of when I was 16 or 17 years old. But after that I soon grew to understand what Bill Holman’s writing was. I learned that his music needed to be played at the tempo in which he envisioned it from the get go. As a drummer, you need to learn to be sort of an orchestrator/co-ar ranger to set up the next section of the piece without being obvious about it. This later became so apparent to me, especially by playing in his band.


He heard Mel Lewis as the glue from segment to segment, from background to shout chorus to melody out. He had Mel Lewis in his head. I learned this from knowing Mel, being friends with Mel, studying Mel and then knowing Bill's writing, learning Bill's writing and putting the two together. They were like one person. Knowing Mel, his playing and his views of how to play the music, taught me that the drummers task was to feel like a big overstuffed sofa the band can sit on when they're playing. Not lay on; but a sofa they can sit on. That's how comfortable the band should be in order to play the music.


Playing Bill's music feels comfortable if you let it come in. If you force it, it's not going to sound the same. A good example of this was when I travelled with Bill to Cologne, Germany, for a recording project with the WDR Big Band. I love Bill Holman and I felt a lot of friendship and respect from Bill Holman over the years so I knew he trusted me with the music he wrote. But I also knew that nobody could play his music from the drum chair like Mel Lewis. I respected that and I knew that I couldn't play the music as well as Mel, but I would do my damnedest to bring what I could to his music. I said, 'Let me know if there's anything you want me to do to help this band come together. I've played these charts with you in your band, so let me know if I need to do something.'


About one arrangement he said, 'The shout chorus always seems to pick up a little tempo-wise.' I said, 'I noticed that, but I thought you wrote it that way, like you wanted to goose it a little bit on the shout chorus.' And he says, "No. Keep letter C in mind when you get to the shout chorus.' (Letter C was simply played by a couple of saxophones.) That was such a huge lesson for me because I ignored the shout chorus. I went to letter C when they went to the shout chorus and Bill looked up at me at the fourth bar, winked at me, and chuckled with that wry smile of his. That's the subtlety, often overlooked, that Bill Holman brings to the music.


A shout chorus is a shout chorus; it's on the ceiling. But Bill's underneath supporting all of that like Mel was on the sofa. It's the same thing. That's why those two guys were so compatible; they thought the same way about the music. He let all the bombs burst in there but wanted that comfortable sofa underneath.


So Bill was recording a Woody Herman tribute and Wolfgang Hirschmann, manager of the WDR Big Band, says, 'We should bring Al Porcino in on this.' Al lived in and had gotten his own big band together in Dusseldorf. He was on that particular date as a third trumpet player because he was no longer playing lead trumpet. So there was also a hot young trumpet player as well as a good jazz player from Germany. We're rehearsing this tune and Al's kind of laying out. Halfway through Bill says, 'OK, let's record this.' Al says, in his halting voice, 'Willis! Hold it! Hold it, Willis!' We all stop and Bill says, 'What is it Al?' Al says, 'In my part, you've got jazz written at letter E. I don't play jazz!' And Bill said, while the bands kind of chuckling, 'Well, pass it down to another trumpet player.' Al says, ‘I’ll do just that, Willis.' And Al passes the part down to another guy. As they're exchanging parts, Al says, 'You know, they called Roy Eldridge "Little Jazz". Well, they call me "VERY Little Jazz".’ (Much laughter.)


On that same trip I said to Willis, 'Do you realize that I have to think like Mel Lewis? I don't lose myself, but I think like Mel Lewis in order to play your music properly. I think you have Mel Lewis in your mind every time you put your pencil to paper. And I think, "What's Mel Lewis going to do to make that music pop off the page, to make it work?" You know he's the glue from this section to that section. Mel Lewis is your guy. Do you think of anyone else when you write?' And Bill looked at me and said, 'Hmm. You might be right.' It's like he'd never thought about it. And I said, 'You have early Duke Ellington and Sonny Greer when it was the Washingtonians and Duke was the piano player, but he had to write with Sonny in mind on those '20s arrangements because Sonny was the leader. And then it became Sam Woodyard and Louis Bellson when he was writing later on.' Ralph Burns had Don Lamond. Bob Florence had Nick Ceroli. Every arranger has his own drummer, and I pointed all of those things out to him. Bill Holman had Mel Lewis.


You cannot not study Mel Lewis and play drums in Bill Holman's band. And that's one of my beefs with drummers who play in Bill Holman's band and haven't studied Mel, and won't give in to that. You can never sound like Mel Lewis but you have to study what he did to bring that to the music, because that's what Bill is hearing!"”