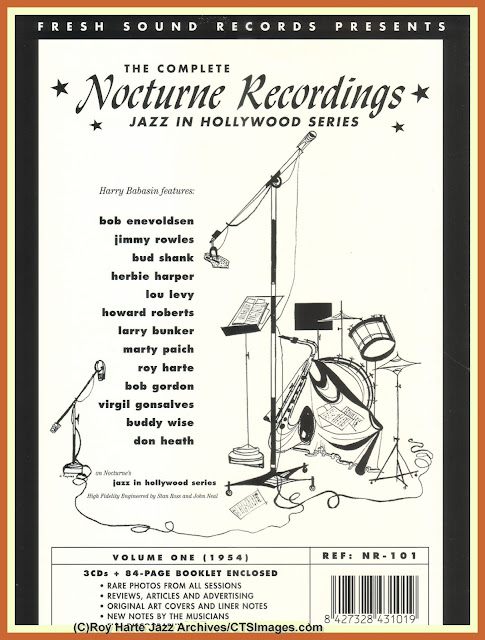 According to Jordi Pujol, the owner-operator of Fresh Sound Records, who bought the catalogues of many smaller record companies that specialized in West Coast Jazz from approximately 1945-1965, The Complete Nocturne Recordings Jazz in Hollywood Series “... began  in 1986, during the vinyl era, with the collaboration of Harry Babasin and later Roy Harte when Harry passed away in 1988 (the two founders of the Nocturne label). It was originally conceived to be released as a large boxed-set with 10" LP records, plus unreleased sessions and rehearsals dates with a comprehensive illustrated booklet about the history of the label. It was a very exciting project but a complicated one, due in fact to the time limitation of the 10" LPs - so the problem was, how or where to include the unissued tracks, or the longer sessions that were already produced for issue as 12" LPs, the new format in 1955.

Early in 1991, when all the budgets for the project had been approved and everything was ready to go (films for the jackets and record labels, plus the LP compilations), this primary idea unfortunately turned out to be an impossible dream. The CD was by then already consolidated in the record market, and our distributors and regular store customers did not wish to stock any more LPs, it being presumed that the end of the LP vinyl had arrived. However, it was a project for the genuine jazz collector and we were still determined to do it, but after hearing some different and disappointing opinions about a possible immediate release, we realized it was not the right moment, it was too late to reach the market, so the Nocturne collection remained on stand-by.

Time passed but not the idea, which, after various frustrating attempts to return to the initial project never came to a definitive fruition. But with the continued encouragement of Roy Harte and some musicians involved, who, from the beginning, had supported and collaborated in the project, there now appears the first 3 CD-set of this collection of sessions produced in Hollywood between 1954 and 1955 by the bassist and cellist Harry Babasin.

Looking back to those years, the label is historically important, because those recordings signified a point of departure and exposure for several young and talented musicians who were very active in the Hollywood jazz scene.

Some of the recorded sessions had remained unreleased after Nocturne folded in 1955, and this collection compiles not only the released Nocturne 10" records but also the remaining recordings, unissued masters and rehearsals by groups planned to be featured in future albums, but which never came to fruition.

The booklet of this volume one includes a comprehensive discography of each Nocturne session included on the present 3 CD-set. There is an introduction written by Harry Babasin himself, plus liner notes written especially by the musicians involved, such as Herbie Harper, Bud Shank, Shorty Rogers, Jimmy Rowles, Marty Paich and Bob Enevoldsen. We have also reproduced the original art covers, advertising, reviews and many previously unedited photographs taken at the sessions by Dave Pell and Tom Heffernan.

Unfortunately Harry Babasin, as well some great musicians and friends, such as Shorty Rogers, Jimmy Rowles, Marty Paich, is no longer with us. This collection is especially dedicated to them and all the others that made Nocturne Records possible.” 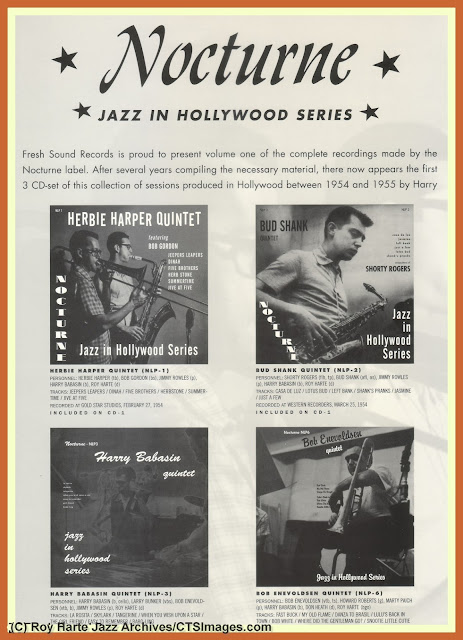 It’s interesting to look back at Jordi’s comments regarding vinyl from today’s perspective as twenty years later in 2015, vinyl LP’s and EP’s are back in vogue again.

Boutique labels such as Nocturne Records were the nearest thing to today’s self-produced recordings. Bassist and cellist Harry Babasin provides the context in which the label came into existence.

“In the late 1940's, with the limitations and privations of World War II in the past, we Americans commenced the resumption of our pre-War lives in the pursuit of our interrupted careers and back to our recreational activities. The music-playing business was much like before with the promoters, with ballrooms, theatres and the like, eager to present the Big Bands - Goodman's, the Dorseys', Basie's - to a public equally eager to return to those diversions of their pre-War memory. While it was a marvellous period that gave the world perhaps the finest big-band music ever, there were undercurrents of change at work which were to end that particular activity for ever.

By the 1950's, the rising standard of living, spurred on by a generally strong economy, the increasing availability of durable goods - cars, refrigerators, etc., and an advancing technology which was putting televisions and high-fidelity sound systems in the hands of virtually all, were dramatically affecting day-to-day life. Residences became comfortable centers of amusement and diversion.

The old attractions, the ballrooms, the theatres, could no longer lure a large public away from the comfort of their own places where they were now able to see the top entertainers, bringing about a drastic change in the field of live entertainment.

To those of us who derived our livelihood from making music in entertainment, the changes were almost total. "Big Bands" as we knew them, became virtually non-existent - even Count Basie spent much of the period leading "The Kansas City Seven". We played for radio, for television, for movies, in small nightclubs - and recording. It is in recording, with its development of high fidelity and stereo long-playing formats that we found the ideal forum for the representation of jazz music. The remarkable compatibility of music and medium set off a tremendous output of jazz record releases with perhaps the greatest proliferation of jazz artists of any period of our history. 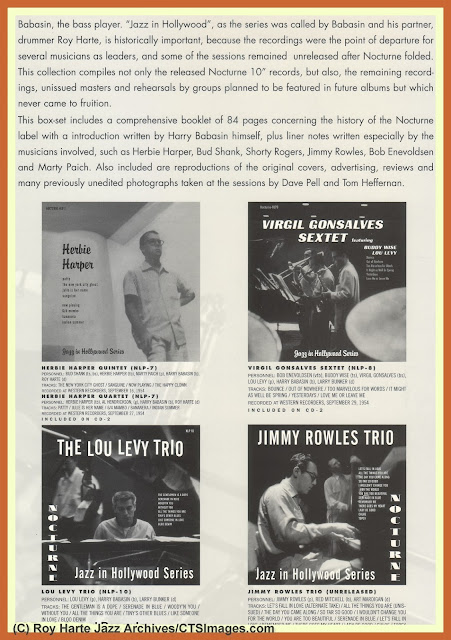 Although perhaps a shadowy figure in the general memory of the period, saxophonist Steve White was prominent in the jazz scene of the late 40s and throughout the 50s. His remarkable ability to combine all styles of jazz made him familiar in all milieux - the traditional Hangover or Astor's, the bebop Billy Berg's or Streets of Paris, the swing La Madelon or Friar's, the progressive Lighthouse or Zardi's. - Harry Babasin, 1987”

In June 1952, and in Harte's own words: "I had just opened up a drum shop-studio with my drummer friend Remo Belli as partner, on 6124 Santa Monica Blvd, which was the original site of Drum City.

Roy Harte recollected that "there was a big warehouse at the back of Drum City's extensive property. In summer 1952, with Dick Bock we set aside a room for Pacific Jazz. Early in '53 an office was allocated to Charles Emge, the West Coast editor of Down Beat, and a year later Nocturne Records also shared the same address. At that time 6124 Santa Monica Blvd was a real hive of activity, and later also included our own music publishing company, Har-Bock."

In January 1954, Harte decided to begin a series of new recordings, with his friend bassist Harry Babasin as partner and musical director. These were to be called "Jazz in Hollywood" and would appear on a new label, Nocturne Records. The intention was to record local musicians to give further credence to the existence of a "new Hollywood jazz school". According to Harry Babasin's own words to Hal Holly (Down Beat, May 19, 1954): "There is very definitely a recognizable new school of jazz that has gradually come into existence here during the past couple of years. It stems from the fact that so many authentic jazz musicians with solid musical backgrounds and training are established here more or less permanently. We don't move around as much as musicians in other parts of the country.”

Nocturne entered the jazz field by recording a quintet headed up by trombone player Herbie Harper, which also introduced the baritone saxophonist Bob Gordon. At that time Harper used to play club dates together with his friend Bob Gordon in a quintet led by drummer George Redman. (Harper was then currently working with the Henry Zimmerman Orchestra on the Dinah Shore T.V. show.) Both played the gigs because Redman gave the soloists plenty of blowing space. Mauri Dell was the pianist and Vivien Garry the fem bass player and singer (who also happened to be the wife of Jimmy Giuffre). The group played the club circuit, which included La Madelon Cafe, The Stadium Club as well as the regular Monday nights at the Celebrity Room. 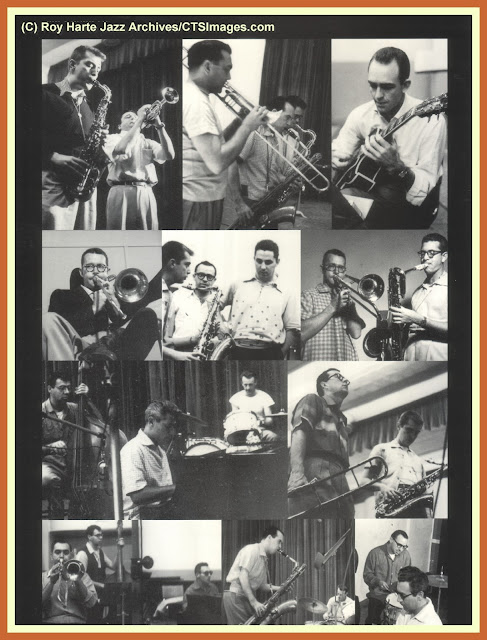 For the recording date, Herbie Harper and Bob Gordon were backed by a house rhythm section made up of pianist Jimmy Rowles, Harry Babasin and Roy Harte. The session took place at the Gold Star Studios on the 27th of February, and Harte's friend Stan Ross was the recording engineer. As Harper remembered it: "No special arrangements were made for that session, and the music came out as a natural consequence of our many shared experiences playing together with George Redman." This first recording appeared in April on a 10-inch LP (Nocturne NLP-1) and received a very favourable critical review (four stars) in Down Beat magazine.

This was the beginning of Nocturne Records, but it would be a short-lived one as Nocturne recorded it last date featuring the Jimmy Rowles trio with Red Mitchell on bass and Art Mardigan on drums on December 13, 1954. The label was only in existence for about one year and issued just nine [9] LP’s, but for many budding West Coast Jazz musicians, it was fun while it lasted.