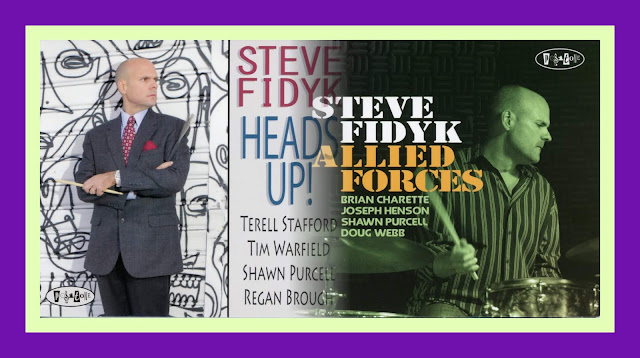 I recently started playing drums again after a long absence.

A tenor sax playing buddy took pity on me and invited me to sit in with his group which usually doesn’t include drums.

After a gig, one of the players in the band said to me: “It’s been a long time since I played with a drummer who actually lifted a band.”

I’m blushingly sharing this remark because drums can cause problems in Jazz.

It’s hard to imagine some forms of the music without them, but there are some musicians and some groups that prefer to play Jazz without drums.

Of course, some drummers exacerbate this preference because they want to play drums first and music later [if at all]. This approach dominates and determines the Sound of Jazz, or at least, the Jazz that is being dominated by drums - think the Buddy Rich Big Band.

I suppose, too, there are times when domineering drumming may be appropriate, for example, it’s also hard to imagine 1960s Jazz drumming without conjuring up Elvin Jones with the John Coltrane Quartet and Tony Williams with the Miles Davis Quintet.

Yet, ironically, at the same time Elvin and Tony were dominating and determining the directions of the music of the Coltrane and Davis groups, they were also liberating the musicians in these bands to play looser and freer.

Modal Jazz [the use of scales as opposed to chords] liberated Miles from having to improvise on the dense harmonies contained in bop chord progressions and Tony Williams’ controlled chaos pushed this liberation further, rhythmically.

Coltrane expanded on the modes he was first exposed to as a member of the Miles Davis Sextet 1959 recording of Kind of Blue and further elaborated and embellished them but not before Elvin Jones loosened up the rhythm behind his modal improvisations with his triplet-based polyrhythms.

Of course, there are numerous other examples of drums as a defining characteristic in Jazz dating back to the beginning of the music in combo form just after World War I.

The entire dynamic of how drums interact in Jazz groups is a very troubling one because there’s always the danger of the instrument being underplayed or overplayed; that is the drummer can either be boring or overbearing.

Compounding the problem for today’s Jazz drummer is the issue of technique and how best to employ it.

Many drummers during the early years of the music were self-taught and they learned by ear developing enough skill to get around the instrument, keep good time and, most importantly, swing.

Limited technical skills may have been a blessing in disguise as it provided drummers with enough ability to contribute to the music without dominating it.

Of course, the Gene Krupa - Chick Webb drum battles were always crowd pleasers and the superior speed and power of Buddy Rich and Louie Bellson would shortly manifest themselves in spotlight settings with the Harry James and Duke Ellington Orchestras of the 1950s, but most Jazz drummers were either in or looking for what Mel Lewis describes in the following quotation about drummer Davy Tough’s situation:

“One thing about Dave Tough: he always was Dave Tough, just as Buddy Rich always was what he was. Tough realized we are what we are. The important thing is to be put into a musical situation where what you are can ‘happen.’ Tough found his place with Woody Herman.”

The young drummers [Stan Levey, Roy Haynes, Denzil Best, Shelly Manne, et al] that came of age with the post World War II Bop movement were more technically inclined, heck you had to be to even play the music.

The advent of drum teachers with innovative approaches to applying drum rudiments [26 exercises designed to help develop alternating hand coordination] to the basic Jazz drum set as well as some basic instruction books on the independence necessary to employ the hands with the feet in the use of the Jazz drum kit became more readily available.

But these materials were of little use in terms of teaching drummers how to play the style of drumming that Kenny Clarke originated for Bebop. That is until the following occurred.

“What young drummers had been studying in challenging drum instruction books by Edward B. Straight and George Lawrence Stone began to make sense after we heard Max Roach. The great teachers laid out the raw materials. But we didn't know how to apply them —until we heard Max. When we got into his coordination, the way he used cymbals, the snare and bass drum, the answers to the puzzle began to fall in place.”
- Vernel Fournier

In the 1950s, Buddy Rich, Louie Bellson, Joe Morello, Philly Joe Jones, Art Blakey, Art Taylor and a host of others arrived on the scene with powerful techniques that had the ability to overwhelm the music if unleashed without restraint.

Lighting a fire under the music is one thing; blowing it up is quite another. But the more prevalent reality was that drummers began to dominant more aspects of the music and the advent of the Elvin Jones style with Coltrane and the Tony Williams approach with Miles only served to underscore this trend.

Every so often a drummer with exceptional facility on the instrument who subordinates it to become a more integral part of the music comes along.

Steve Fidyk is just such a drummer.

Thanks to preview copies of his CDs Heads Up! And Allied Forces which he shared with me, I have been revelling in his skills and talents.

It’s all here - precision, blistering speed, power -  but you hear this through drums that emphasize bouncing bebop beats, New Orleans street beats, boogie beats, rock beats, straight-ahead jazz beats, organ-tenor-guitar beats, and the like - not just the drums. He has chops to spare but Steve is all about the music

The drums, as sensitively played by Steve, take on a controlled creativity that compliments and complements the 20 tracks that make up these two recordings.

I suppose one of the biggest accolades you could offer about these recordings is that you would never know that the band on them is headed-up by a drummer.

Steve Fidyk Heads Up! was issued on the Posi-tone label [PR 8119] in 2014 and features Steve along with Terell Stafford, trumpet, Tim Warfield, tenor sax, Shawn Purcell, guitar and Regan Brough on bassist with Steve as the composer of four of its nine tracks.

Steve represents something of an anomaly.

As a composer, Steve is dealing with melody and harmony and not just rhythm. As a result, he has a broader awareness of how all of the pieces fit into a composition and thus brings his intensity as a drummer down to allow these to be heard more clearly.

And despite chops galore, he has to underplay the drums so that they become a part of the music and not something that pushes it inexorably.

This taste and discrimination on Steve’s part gives the music a chance to be expressed as compared to being exposed, if not, exploded by bombastic drumming.

The late Gene Lees once asked the pianist Bill Evans why Oscar Peterson didn’t incorporate his use of harmonic inner voicings into his style. Bill answered to the effect that it wouldn’t fit with what he’s doing.

The same could be said of Steve: his “controlled creativity” approach to drumming wouldn’t fit into what Elvin did with Coltrane and Tony did with Miles - controlled chaos was more to the point in those instances.

A great deal of thought has obviously gone into the choice of instrumentation on Steve’s recordings and it influences the sonority of each of the bands, considerably. For example the trumpet, tenor, guitar, bass and drums group on Heads Up! is replaced by a tenor sax, alto sax and organ front line on Steve Fidyk Allied Forces [PR 8157] the next CD by Steve with Shawn Purcell once again doing the honors on guitar.

As you would imagine, the texture or sonority between the two CDs is vastly different and Steve takes full advantage of these dissimilarities both in the style of drumming that he employs and in the six [of eleven] originals that he composed for the disc.

The organ brings out a heavier sonic footprint for the drums as does the double sax and guitar front line. Steve’s drums sound deeper and fuller in support of all the firepower generated by Doug Webb [tenor sax], Joseph Henson [alto sax], and Brian Charette on organ.

In addition to the originals, Monk’s Evidence, Charlie Parker’s Moose the Mooche, Frank Foster’s Shiny Stockings along with Julie Styne’s Make Someone Happy and these standards give the listener some familiar melodies as a frame of reference along with all the new music represented on these CDs including two fun tunes by guitarist Shawn Purcell - Doin’ The Shake and Might This Be-Bop - which show off Shawn’s versatility as a groove guitarist and a bebopper.

For great musicianship, great music and great drumming that contributes power and pulse in the finest traditions of Jazz drumming, you can’t do better than the Fidyk Force as represented on Steve Fidyk Heads Up! and Steve Fidyk Allied Forces.