Pub Crawling with Jimmy Deuchar and The Lads

“[Jimmy Deuchar] …the great Scot, whose sound sometimes seemed like a hybrid of Bunny Berigan and Fats Navarro, and who is usually recognizable within a few bars - taut, hot, but capable of bursts of great lyricism.”
- Richard Cook and Brian Morton The Penguin Guide to jazz on CD, 6th Ed

"If the Union problem didn't exist, I'd take Jimmy Deuchar back to with me tomorrow. He's one of the finest trumpeters I've ever heard; and his all-round musicianship is fantastic." That's what American pianist-arranger-composer Marty Paich told me during a Deuchar disc date when Marty was in in 1956.
- Tony Hall, insert notes, Jimmy Deuchar: Opus de Funk [Jasmine JASCD 621] 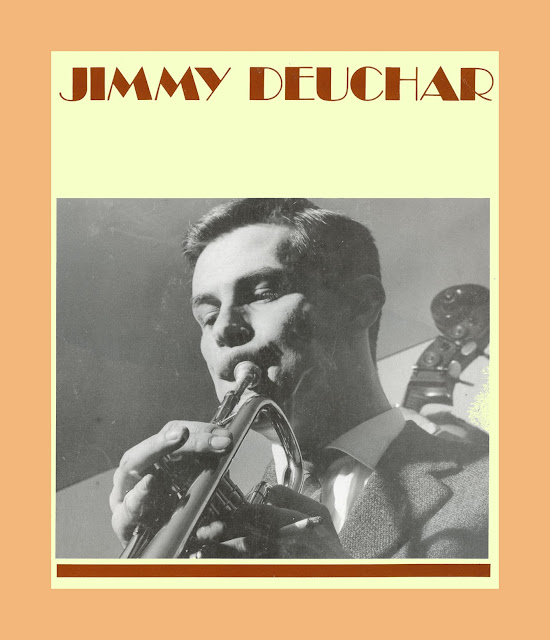 Although it took me a while to grasp how far-flung its influence was, culturally, one of the ’s greatest gifts to the world is Jazz in all its manifestations.

In retrospect, I became aware that through Willis Conover’s Voice-of-America and a variety of European-based radio broadcasts, exported US records and vibrant domestic recording labels in a host of European countries and the efforts of visiting or expatriate Jazz musicians, Jazz thrived in far-flung places like Great Britain, France, Sweden, The Netherlands, Italy, Argentina, Brazil, Chile and Japan.

And where it wasn’t allow to flourish openly, a serious Jazz underground following developed in central and The Soviet Union.

Thanks to many generous urbane and cosmopolitan friends, then and now, my awareness of Jazz on the international scene has grown over the years much to my satisfaction and enjoyment.

My first exposure to Jazz abroad were a series of Jazz in Britain recordings that Lester Koenig released on Contemporary Records, a Hollywood, California based label whose “corporate offices” and “recording studios” were conveniently located about 10 miles from where I went to high school.

Lester’s “corporate offices” consisted of a small storefront near Paramount Movie Studios on and his “recording studio” was sometimes set up in the back room where he packed and shipped his LP’s.

Lester’s “British Jazz” LP’s were actually re-issues of recordings that had originally been produced for London-based labels such as Tempo and Jasmine. [Essentially, Lester was reversing the process and “importing” Jazz back into the !]

One of these was the late drummer-vibraphonist-pianist Victor Feldman’s Suite Sixteen [Contemporary C-3541;OJCCD-1768-2].  Issued in 1958, this LP was comprised of quartet, septet and big band recordings that Victor had made in in 1955 before taking up residence in the the following year.

This album was my first introduction to Brits or, if you will, the “Lads,” in modern-day parlance, such as trumpeter Dizzy Reece, trombonist and bass trumpeter, Ken Wray alto saxophonist Derek Humble, tenor saxophonists Ronnie Scott and Tubby Hayes, bassist Lennie Bush and drummers Tony Crombie and Phil Seaman.

Although he only solos on three of the albums nine tracks, the player who impressed me the most on Victor’s Suite Sixteen was trumpeter Jimmy Deuchar [pronounced “dew-car”]. 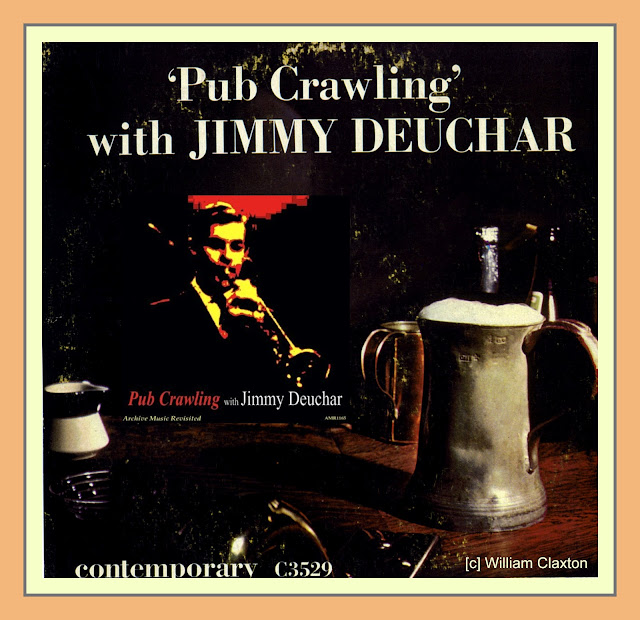 Imagine my delight then when Lester Koenig did it again, this time with six tracks by “the young Scotsman,” entitled Pub Crawling with Jimmy Deuchar [Contemporary C-3529].  I gather that the idea for the album’s title comes from the fact that each of its six tracks is named after one of the best known British brands of beer.

The album was also released in the in 1958 and if I heard a glimmer of something earlier in Jimmy’s playing, the work of “this exceptional young, Scottish trumpeter-arranger-composer” comes bursting through on these sides.

In addition to his brilliant solo stylings, Pub Crawling with Jimmy Deuchar also introduces Jimmy as an extremely talented composer-arranger who writes in a style that is very reminiscent of the late Tadd Dameron.

On hand on these discs is lots more of the fine playing of Wray, Humble, Hayes, Scott, Bush, Seaman and Crombie along with some players on the British Jazz scene who were unfamiliar to me at the time including pianists Terry Shannon, Stan Tracey, Eddie Harvey and Harry South, bassist Sammy Stokes and drummer Ganley. 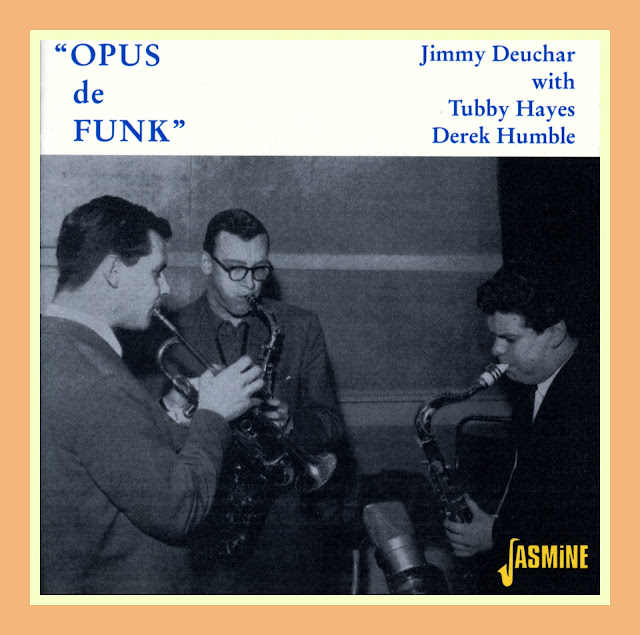 Of these recording by Jimmy Deuchar and his mates … err, “Lads,” Richard Cook and Brian Morton have written in The Penguin Guide to jazz on CD, 6th Ed.:

“These are welcome reminders of the great Scot, whose sound sometimes seemed like a hybrid of Bunny Berigan and Fats Navarro, and who is usually recognizable within a few bars - taut, hot, but capable of bursts of great lyricism.

Some of his best work is with Tubby Hayes, who himself pops up in various of these dates; but these precious survivals of the British scene of the '508 - which exist solely through the dedication and enthusiasm of Tony Hall, who oversaw all the sessions - are fine too. The first two discs are bothered by the boxy and inadequate sound (and the re-mastering, which may not be from the original tapes, is less than first class), but the playing is of a standard which may sur­prise those unfamiliar with this period of British jazz.

There are excellent contributions from Humble, Hayes, the very neglected and the redoubtable Seamen; but Deuchar, as is proper, takes the ear most readily: punchily conversational, sometimes overly clipped, but then throwing in a long, graceful line when you don't expect it, he was a distinctive stylist.

These sets are made up from EPs and ten-inch LPs, but the third reissues all of the splendid Pal Jimmy! plus a stray track from a compilation. The trumpeter's solo on the title-track blues is a classic statement. Again, less than ideal re-mastering, but with original vinyl copies of these extremely rare records costing a king's ransom, they're very welcome indeed.” 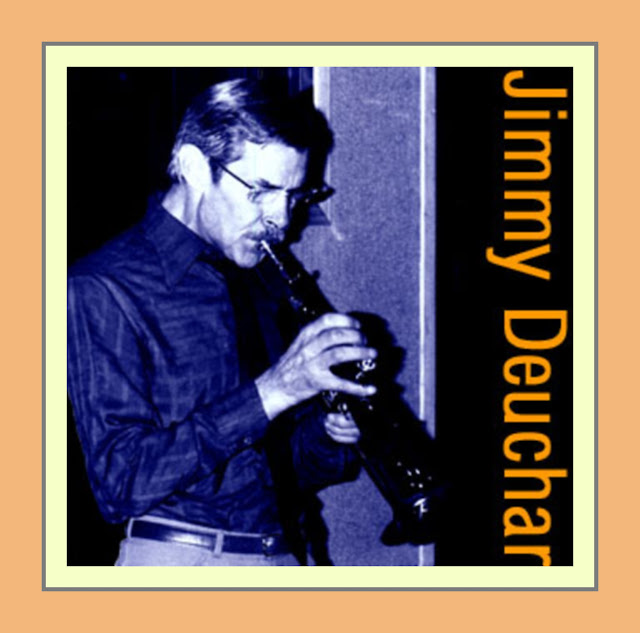 At the time of their initial release, the highly regarded Edgar Jackson had this to say in the October, 1955 British publication, The Melody Maker:

“One of the tracks on this record is probably not only the best example of British jazz in the modem manner ever to find its way on to a record but not so far short of one of the best from any­where.

The track is IPA Special (named, as are all the others, after a brand of beer.)

It shows that Jimmy Deuchar (who composed and arranged all of the tunes) is second to none in this country in the matter of thinking up and scoring out first-rate modern jazz material.

It shows also: (a) that Jimmy has become a better trumpet man than ever now that he is playing with a warmer feeling and tone, (b) that while Derek Humble may not yet be the world’s greatest baritone saxophonist, he is certainly a grand, driving altoist, (c) that Ken Wray is one of our most original and advanced trombonists, and (d) that British rhythm sections are not always as gauche and stodgy as they are often said to be.

The record as a whole, with Jimmy never failing to convince as a skillful and captivating writer, and Victor Feldman playing tasteful and delightful piano, is a relieving and refreshing indication that our best modern jazzmen can compete with the best anywhere else—when given a fair chance.

The recording itself is excellent.   But I would hardly have expected any­thing else, for the session engineer was Decca's brilliant Arthur Lilley.”

Jimmy’s solos shimmer in their vibrancy. Fats Navarro. Clifford Brown, Carmel Jones and a host of the trumpet soloists who display a fat, full, fiery sound in their phrasing come to mind, but Jimmy is his own man.

The construction of his improvised lines is marked by coherence and continuity, but most of all, by originality. You just don’t hear other trumpeters playing Jimmy’s stuff.

I was especially pleased to rediscover Jimmy’s powerhouse trumpet playing on many of the Clarke Boland Big Band [CBBB] recordings from the 1960s.

According to tenor saxophonist Ronnie Scott [who would later join the CBBB]: “Derek Humble was the navigator-in-chief on the band and one of his first recommendations to Kenny Clarke and Francy Boland was to bring Jimmy Deuchar on the band to play the Jazz trumpet chair.”

As Mike Hennessey noted in his chapter on the CBBB from his biography of drummer Kenny Clarke: “Seven of the thirteen musicians in the band were European and their ability to hold their own with their [expatriate] American colleagues did no damage at all to the cause of winning a just measure of appreciation and recognition for some of the excellent European Jazz musicians who were emerging.” [pp. 165-166] 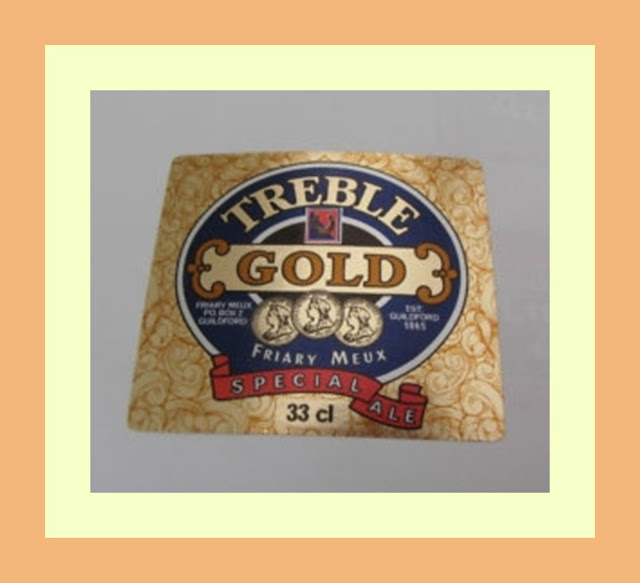 If you have not had the pleasure of having heard Jimmy Deuchar, his playing and that of the Lads – Ken Wray [bass trumpet], Derek Humble [as], Tubby Hayes [ts], Victor Feldman [p], Lennie Bush [b] and Phil Seamen [d] - is on display on the following tribute. The tune is Jimmy’s Treble Gold, which is named after an ale that I understand it is no longer made by the Friary Meux Brewery in .