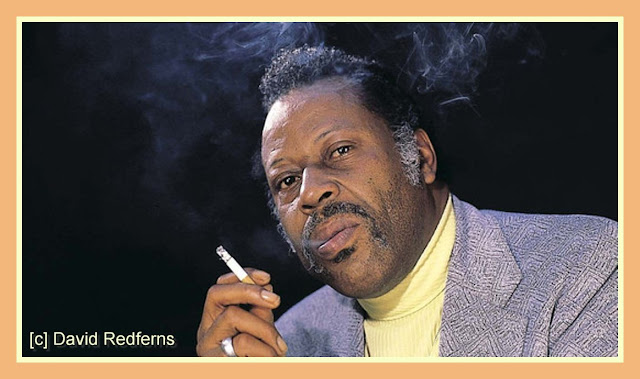 “Davis straddles bop and swing in his phrasing; if anything, with his swallowed notes, sandpapery tone and sudden shrieks, he’s already a genre unto himself. … was to become one of the most honest, no-nonsense soloist in the music. The knockout power of ’ blowing is thrilling.”
- Richard Cook and Brian Morton, Penguin Guide to Jazz on CD, 6th Ed.

“Eddie Davis is what you would call a natural musician for he never took a lesson in his life; not one that he didn’t administer himself, anyway. When Eddie decided that he wanted to play the tenor saxophone, he bought one second-hand and with it an instruction book which he studied diligently for eight months. At the end of this period, he played his first job [1942] at Clark Monroe’s Uptown House, one of the first bastions of modern Jazz.”
-

“He talked the way he played. He was glib, and his silver-tongued, pleasantly confrontational style always elicited a great audience response.
There were players who were better known, more influential, whatever; but they weren’t any more confident or fearless than Jaws. He came to play, and if you were smart you didn’t mess with him. He brought a street-fighter’s instincts to the bandstand.”
- Joel Dorn

Okay, no shilly-shallying around: Eddie “Lockjaw” ’ tenor saxophone playing just knocks me out.

“Jaws” constantly delivered a brand of intensity and excitement on the instrument which aptly earned him the reputation for being one, tough, tenor saxophonist.

Whatever the setting – soloist with the Count Basie Orchestra, in Hammond B-3 Organ trios with Shirley Scott or co-leading a quintet with fellow tenor saxophonist Johnny Griffin – Eddie barreled through them all with a temerity and a boldness that would characterize his career.

“His sound was, on reflection, a surprisingly complex matter. Unlike many of the players working in the organ-combo format, where Jaws made his biggest impact, his phrasing had an elongated quality that he broke up only with his matter-of-fact brusqueness; as if he was masking emotion with a temperament that told him to get on with it.” [- Richard Cook and Brian Morton, Penguin Guide to Jazz on CD, 6th Ed.]

Jaws was a blustery soloist who came to prominence in the world of Jazz at a time when had you had to “make your bones” by engaging in “cutting” sessions with other tenor saxophonists.

Such “duels” might include only another tenor sax player, or perhaps two others or even a stage full of them; some were known to go on all night, ending in the wee small hours of the morning.

The creative sparks flew when tenor saxophones engaged in such battles, and Eddie “Lockjaw” was often tested, but rarely bested in these competitions.

Whether he was playing the blues or a ballad, Jaws spun solos of flat-out exuberance and exhilaration. His sound was always inimitable and accomplished. 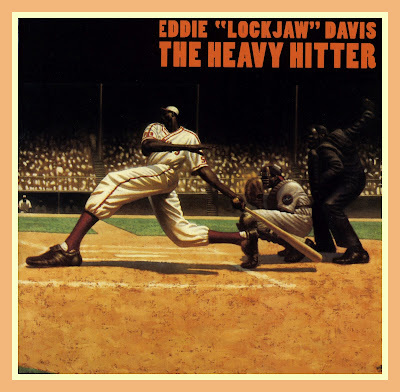 We found a nice overview of the salient features of Eddie’s career in the insert notes that prepared for Eddie “Lockjaw” David: The Heavy Hitter [32 Jazz 32057].

“Eddie Lockjaw Davis, more commonly known these days as Jaws, is a thorough master of his instrument and his art. He is a warm, articulate, no-nonsense person who dispatches his business with a flair and a near perfection.

At the beginning of the session that produced this album, I made reference to the second night of recording. Jaws looked at me with surprise and said, "Second night! I'm only sup­posed to do one album. We'll do that now." As we had had no rehearsals and he had never played with the pianist or drummer before, I was skeptical, to say the very least.

But watching Jaws at work was an education. He was affable and encouraging with his sidemen, yet always in charge. He kept things moving without any trace of hurry or tension. Minutes after the rhythm section arrived, everyone was in his place and ready to go. Jaws would quickly talk out an arrangement, never allow a run through, saying, "Save it for the take. Don't give it away now." And every take was a first take with everyone sounding excel­lent and Jaws sounding nothing short of brilliant.

It is a testament to these musicians' abilities and professionalism and a miracle to me that such performances could come out of first takes without one sheet of music or one rehearsal. For the second tune of the night, Jaws turned to the rhythm section and said, "Okay 'Old Folks' and then we'll go into 'Out Of Nowhere.' Do you know the changes to these? I'll take a chorus and a half, the piano for the bridge and the last eight bars of that cho­rus. Then the bass and drums lay out and the piano has four bars to modu­late up to C for 'Out Of Nowhere.' We play 'Old Folks' in F. I'll play this phrase. (He plays it.) Got it? Okay, let's take it."

Jaws' tone is big and rich. He is of that generation and school that makes every note meaningful and beautiful in and of itself. He can burn earnestly without working up a sweat, and he can seduce a ballad without resorting to sentimentality. His solos seem to flow casually out of a bottomless reservoir of creativity and feeling. 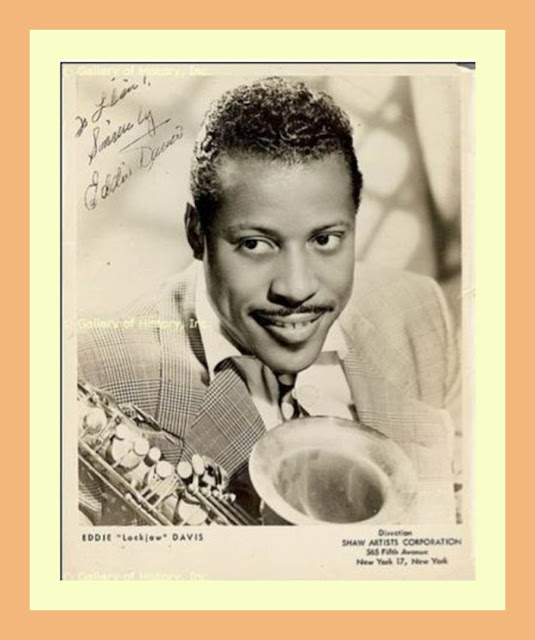 Although Lockjaw is chronologically in the age of be-bop, his primary influences were Ben Webster, Coleman Hawkins and Herschel Evans. Born in in 1921, he made his first mark in 1942 and '43 with Cootie Williams, Lucky Millinder, Andy Kirk, Louis Armstrong and other band leaders. The be-bop revo­lution was not one that passed him by as is evidenced by the lovely Fats Navarro date on in which he was featured. But his soul and spirit was and is firmly entrenched in the style and sound of the swing mas­ters. During the post war era, he recorded prolifically on a variety of labels. His first session as a leader was for Haven Records. The originals on the date were ar­bitrarily given the names of diseases. One tune, "Lock­jaw," was a hit. It established and gave him a nickname that remains to this day a part of his moni­ker.

In 1952, Lockjaw joined the Count Basie organiza­tion for the first time and quickly became an attrac­tion as the band's cooking blues soloist. The excite­ment that he generated matched Illinois Jacquet's his­trionics with Lionel Hampton in the forties, but Eddie was a thoughtful soloist who never relied solely on grandstanding. Lockjaw would slide in and out of Basie's band as tenor saxophonist and road manager through the years, his longest stint lasting from 1966 to 1973.

After that first go-round with Basie, Eddie led his own groups around , until 1955 when he as­sembled a permanent working band with organist Shirley Scott. That group lasted five years and pio­neered the tenor-organ format in jazz. The group's life span is well documented on a string of soulful, intimate albums on Prestige, many of which included Lockjaw's longtime associate George Duvivier.
In 1960, Eddie joined forces with Johnny Griffin, tenor master with a more modern, bop-oriented bent. For the next two years, they battled it out on many recordings and bandstands in the great tradition of Stitt and Ammons or Dexter and Wardell.

When declining public and eco­nomics took their toll on jazz, Griff moved to , jaws was soon to make the startling announcement that he was giving up the saxophone and taking a position as a booking agent with Shaw Artists, one of the heaviest jazz agencies of the period. Thank­fully, although successful in that ca­pacity, Jaws ultimately found the horn too irresistible and returned to play­ing. His "comeback" was in full force by 1966 when he joined the Basie band in both business and musical capaci­ties.

In 1973, Eddie left Basie again, played with Ella Fitzgerald for a time and then stepped out as a leader and a featured soloist in a variety of settings and circumstances around the planet.

In his later years, Lockjaw often recorded with Harry "Sweets"  and he remained a busy soloist up until his death in 1986.”