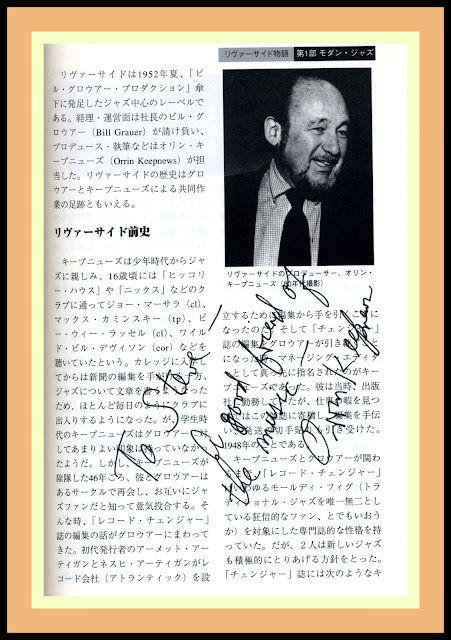 “When Orrin Keepnews, the Grammy Award-winning jazz-record producer, writer and reissue master, was growing up in New York in the "30s and "40s, a teenager -- for the cost of a beer or two, when the legal drinking age was 18 (and, says Mr. Keepnews, carding was lax) -- could listen for hours to world-class jazz musicians at one of the clubs along 52nd Street or in Greenwich Village. According to Mr. Keepnews, now 85 and speaking from his home in , ‘It was advertised as: "Hey, this is a good way to have a cheap date," and I ended up getting interested in the music. That's being a little too cute about it -- but that's really, basically, where it started from.’”
- Tom Nolan, Wall Street Journal,

In 1953, Orrin Keepnews and Bill Grauer founded Riverside Records. Despite, the latter’s best efforts to the contrary, Orrin managed to keep Riverside going for ten [10] years as an independently owned and operated record label devoted exclusively to Jazz artists, many of whom were virtual unknowns when he recorded them.

“One of the key elements in the development of and other independent labels, Mr. Keepnews says, was the "postwar deflationary period": ‘At that point, union-scale pay for a sideman for a three-hour session was $41.25; double that for the leader. Among other things, you could do a trio album for a total musician cost of, in round numbers, $250. That is probably the most important factor in the growth of independent jazz labels -- and why, as it turned out, the "50s was such a golden age for recorded jazz, I think.’”
- Tom Nolan, Wall Street Journal,

Yet, this illustrious background notwithstanding, just like that, after I had put out a call for help via an internet chat group to which we both belonged, Orrin waked into a restaurant in San Francisco in 1999 and granted me an interview for an article I was working on about the late pianist and vibraphonist, Victor Feldman.

What a pleasure it was to listen to him respond to questions and to recount his stories about the music. For example, on the signing of Thelonious Monk for the label, Orrin shared:

"When we were told about his possible availability as a recording artist, we set up a meeting with Thelonious, and to my total surprise, he knew exactly what our past relationship had been.  Seven years before, I had interviewed him for what he informed me was the first article about him ever to appear in a national magazine. So that really made it very feasible for us. Prestige wasn't interested in retaining him; he wasn't selling records, and he was difficult to deal with... . So we signed him. And that really was the beginning of me as a jazz producer."

He moved to in 1972 to take on the Jazz Arts and Repertoire responsibility at Fantasy Records after it purchased Milestone where he was reunited with pianist Bill Evans and signed and recorded tenor saxophonist Sonny Rollins.

Back on his own again in 1985, Orrin brought Landmark Records into existence and where he featured recordings by vibraphonist Bobby Hutcherson, among others.

After selling Landmark in 1993, Orrin remained active in producing CD reissues such as the Duke Ellington 24 CD centennial set for RCA in 1999.

Ultimately, The Concord Record Group bought the catalogue of a number of independent Jazz record labels, including , and Orrin played a variety of roles in helping with ’s CD reissues under the rubric of “Original Jazz Classics.”

Or as Orrin explains:

“You stick in this business long enough," he says, "and the damnedest things happen." The archival materials he's now repackaging are the once-contemporary albums he himself produced half a century ago.
"I'm not complaining," Mr. Keepnews says with a chuckle. "I'm not bragging. But it's there -- and I must say that I find these things hold up rather well."
- Tom Nolan, Wall Street Journal,


In 2011, Keepnews was named a Jazz Master by the National Endowment of the Arts for his “significant contributions” to the field of jazz. He also received a lifetime achievement award from the National Academy of Recording Arts and Sciences in 2004.

Our video tribute to him features a track from one of Orrin’s albums under the leadership of drummer Philly Joe Jones [Drums Around the World – Riverside LP 1147; Original Jazz Classic OJCCD-1792-2]. During our visit, Orrin happened to mention the fact that Philly played on more Riverside LP’s than any, other drummer.

The tune is Benny Golson’s Jazz classic Stablemates, which he also arranged for the date. On it, Philly and Benny [tenor saxophone] are joined by Lee Morgan and Blue Mitchell on trumpet, Curtis Fuller on trombone, Cannon ball Adderley on alto sax and Sahib Shihab on baritone sax, Herbie Mann on flute and piccolo, Wynton Kelly on piano and Sam Jones on bass.