A Standard Still on the Tracks at 80 - John Edward Hasse 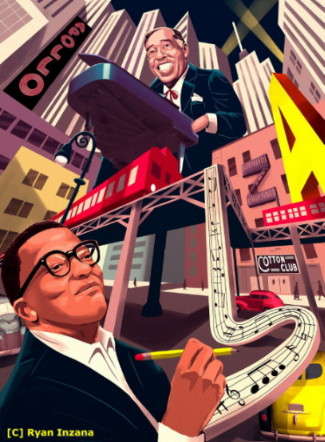 Billy Strayhorn’s ‘Take the ‘A’ Train’ performed by Duke Ellington’s orchestra summons the hustle and bustle of a trip up to Harlem.

“Quick. What brilliant musician do you associate with “Take the ‘A’ Train”? If you said Duke Ellington, you’d be half right. His band made it famous. But, unlike the bulk of his band’s repertory, Ellington didn’t compose it—that honor belongs to Billy Strayhorn, his longtime writing and arranging partner.

This stirring dance number, as recorded on Feb. 15, 1941, marked Strayhorn’s breakthrough as a composer. Opening or closing countless concerts with it, Ellington made it his band’s signature tune. Noted musicians have told me that, even after hearing it hundreds of times, they never tire of its masterly construction and swinging exuberance—it always seems familiar yet fresh.

The backstory dates from 1939. That’s when Strayhorn, a shy, classically trained musician, joined the pre-eminent Ellington organization at age 23 and began contributing arrangements and songs. Because of a business dispute, at the beginning of 1941 U.S. radio stations banned music written by composers affiliated with ASCAP — the American Society of Composers, Authors, and Publishers — who included Ellington. With characteristic ingenuity, Ellington turned to his son, Mercer, and to Strayhorn, neither of whom had yet joined ASCAP, to produce material for the band. Strayhorn brought out “Take the ‘A’ Train,” which he had composed earlier; but dissatisfied with it, he reportedly threw the manuscript away. Mercer, however, retrieved it and persuaded Strayhorn to polish it.

On Jan. 15, 1941, Ellington’s band first recorded the number, but it was solely for distribution to radio stations. Exactly one month later, they recorded the piece for Victor, the era’s leading label. This is the version that jumped onto Billboard’s record charts and found an enduring place in the American soundscape.

Strayhorn deftly deploys elements that had been perfected by Ellington and other swing-era composers: rolling figures in the sax section, contrasting tone colors, call-and-response patterns, modulation to a new key, and brass rendering do-wahs with hat mutes. His striking inspiration: incorporating what musicians call a “flatted fifth,” thus creating a colorful whole-tone harmony. You can hear it at the sixth note of the melody: It becomes the transcendent tone of “‘A’ Train.” The piece looks both backward to the swing era—summarizing conventions of big-band scoring—and forward, with its chromatic hints of bebop to come.

This rendition showcases 27-year-old trumpeter Ray Nance, making one of his first recordings with Ellington after having recently joined the band. Nance’s sparkling solo—first with mute, then without—is so well conceived that it became an expected part of the band’s performances. Nance was nonpareil: not only a brilliant trumpeter, but also an accomplished violinist, singer and dancer—no wonder he was dubbed “Floorshow.”

Five elements converged in this remarkable recording: the precocious composing voice of Strayhorn, the inspiring leadership of Ellington, the melodic magic of trumpeter Nance, the seasoned tightness of the band, and the talents of the Victor engineers, who captured the band’s sound with fidelity and richness.

The piece summons the energy of urban life, the forward movement of a city filled with hustle, bustle and optimism. The flowing saxophone figures suggest wheels gliding down the tracks. A dense, dissonant chord sounds like the train is briefly braking. And in the last half-minute, as the band gets softer and softer, you can imagine the A train all but disappearing in the dark and reaching a station far down the tunnel.

With his lyrics, Strayhorn said he was writing subway directions to Harlem, where Ellington made his home on posh Sugar Hill. There are various versions. One of them begins, “You must take the A train / To get to Sugar Hill way up in Harlem.”

So emblematic of American music was “‘A’ Train” that for decades it served as the theme of the celebrated global radio program “Voice of America Jazz Hour,” especially impactful behind the Iron Curtain.

Ellington and Strayhorn strove to keep the piece new. Strayhorn’s orchestration for the album “Ellington Uptown,” recorded in 1951 and ’52, evolved into an eight-minute performance featuring Betty Roché’s bebop scat vocal and Paul Gonsalves’s tenor sax solo in overdrive. On some occasions, Ellington, as pianist, would play the entire first chorus as a waltz. Other times, he would tease the audience by playfully and purposefully stopping the melody three notes before the end, as if playing a dissonant clinker.

In addition to Ellington’s many renditions, my very favorite is from 1969 by Nance, this time on violin instead of trumpet. You might not recognize it at first: He plays it once through, out of tempo and ever so slowly, with such lyrical feeling that he transforms it into a sensitive, wistful, exquisite ballad.

As of 2021, “‘A’ Train” ranks as the seventh most-recorded jazz standard, and its numbers keep growing. At 80, as it echoes through the decades, fans and musicians keep climbing aboard and enjoying a timeless ride. The “‘A’ Train” shows no signs of stopping.

—Mr. Hasse is curator emeritus of American music at the Smithsonian’s National Museum of American History. His books include “Beyond Category: The Life and Genius of Duke Ellington” (Da Capo) and “Discover Jazz” (Pearson).