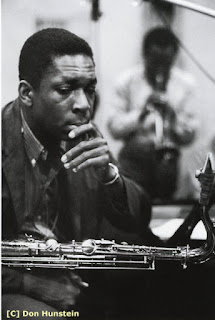 “I  first heard him in a band with [drummer]  Kenny Clarke. I remember very well. John and Kenny, it was fantastic. And I recall thinking that John was a puzzle. I could never figure out how he arrived at, how he came up with, what he played. It was one of the things that made him unique. I never got a better fix on it through the years. Like any genius, it’s hard to get a handle on how they come up with their ideas.

His influence was very pervasive. But I don't think it's necessarily bad to have influences. It's inevitable. Any guy who's that much into music is bound to be listening heavily to someone before him, like I did with Coleman Hawkins. The individuality will come out if it's there. It depends whether or not the individual player can transcend the influence. To play what we call modern music, you need some antecedents.

Although he had a sense of humor, he was quite serious most of the time. Almost like a guy who would be a minister, especially about music. You realized you were in the presence of someone who held the sacred in high regard. His humor wasn't about cracking jokes or anything like that, he was more droll or wry...

There were a lot of guys that were messed up on drugs, but I never looked at John in that way. He was never that type of guy. It's incongruous. But I guess it happened, and at times he was messed up. It was out of character.

I remember when I heard the news of his death [1967]. I was working somewhere and I took some people back to Brooklyn. In those days we wouldn't get out of the clubs until four in the morning. By the time I got back home it was light out. f was listening to WOR and there was a quote from Elvin to the effect that John never hurt anybody. It was a shock; I had just talked to him two weeks earlier. We were always close.”

SONNY ROLLINS as told to Pete Watrous in The Jazz Musicians: 15 Years of Interviews, The Best of the Magazine [1994].