How John Coltrane Got His Sound 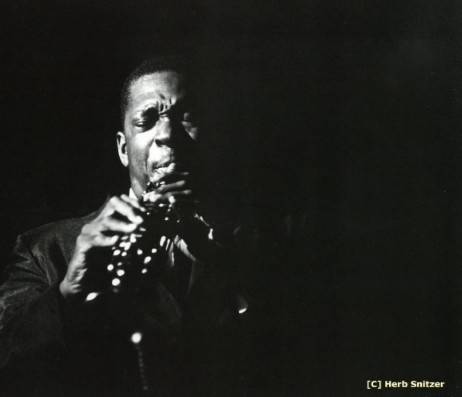 Over the years, much has been written about John Coltrane’s SOUND.

But how exactly did Coltrane produce it?

As you will come to understand after reading the following excerpts from Lewis Porter’s John Coltrane: His Life and Music [1999], Coltrane’s sound was made up of musical and mechanical elements that he had the genius to blend into one of the most recognizable “signatures’ in Jazz history.

The context for Lewis’s observations and analysis is the period from 1955 - 1957 when John was a member of Miles’s first, classic quintet which he then left for a stint with Thelonious Monk’s Quartet before returning to Miles, this time as a member of Davis’ sextet with Cannonball Adderley, Bill Evans, Paul Chambers and Jimmy Cobb.

“Coltrane was very serious about his art.

Cannonball Adderley recalled, "Where sometimes Miles would take on some humor in his playing—or lots of times I might feel lighter than usual—John was heavily involved with being just serious and musical, all the time."

He almost never indulged in musical humor or in quoting entire phrases that would be familiar to listeners, and in this respect he was the opposite of Rollins, who is the musical quoter nonpareil.  .. Coltrane's music, more and more, seems to have been about the here and now, about being involved with what he and his group were playing at that moment. Quotations had no place in that world.

The serious tone of the minor mode may be one reason that Coltrane liked to use it (and later the Dorian). "Serious" is a generalization and does not apply to all minor melodies in all cultures; but it does seem fair to say that in Coltrane's music, minor tends to be serious.18 On the blues he relies heavily on the flat seventh and third, which gives his blues playing a minor quality as compared with the major-sounding blues solos of, say, Parker and Lester Young. Significantly, Coltrane liked to write blues themes in the minor. A minor blues, he told Leonard Feather in 1959, "is always good." He said in 1965, "I have a natural feeling for the minor."19

Apparently, it was also during this period that Coltrane became interested in the possibilities of sequences of fourths, something that was to figure prominently in his melodies of the 1960s.  … Coltrane  noted that around the time he was with Monk "I started playing fourth chords" 9”Coltrane on Coltrane"). However, it is hard to interpret his statement that he could create a bigger sound with "more volume" on fourths than on arpeggiated ninth chords. Perhaps this has to do with his practicing of multiphonics, which typically involves trying to bring out the overtone a fifth above (and thus related to the fourth below} each note.

Coltrane was always working on his sound. [Emphasis mine.] No doubt many of the hours that Coltrane spent practicing, throughout his life, were not devoted to finger exercises but were spent quietly experimenting with reeds and mouthpieces. Tom Dowel, Coltrane's recording engineer at Atlantic Records, remembers Coltrane's warmup routine: "John usually showed up about an hour before the session. Much in the manner of classical musicians practicing before a recital, he would stand in a corner, face the wall, play, stop, change reeds, and start again. After a while he would settle on the mouthpiece and reed that felt most comfortable to him, and then he would start to work on the 'runs' that he wanted to use during the session. I would watch him play the same passage over and over again, changing his breathing, his fingering, and experimenting with the most minute changes in his phrasing. Once in a while he would go back to a mouthpiece he had abandoned earlier."

On the saxophone finding your own sound depends largely on finding your personal combination of mouthpiece and reed. Many types and hardnesses of reeds and dozens of mouthpieces are available. Each saxophone also resonates a certain way, and the shape of one's air cavities and sinuses will also help determine the sound one gets—this last, obviously, is not under the player's control. Some players, such as Charlie Parker, had a reputation for being able to get the sound they wanted even on borrowed mouthpieces and instruments. Coltrane was not easily satisfied—he searched hard for the perfect sound. Fellow saxophonist Wayne Shorter says that Dexter Gordon recalled giving Coltrane a mouthpiece to help him project. Shorter believes Jimmy Oliver gave him one too, and that Coltrane sounded so good on it that Oliver wanted it back. By all accounts, Coltrane eventually had a large collection of mouthpieces. Even when he found a mouthpiece he liked, he would sometimes have a specialist adjust it (by fine sanding and other methods) to get closer to what he heard inside his head.

Most photographs show Coltrane playing on a metal mouthpiece, usually an Otto Link model. (Occasionally in the early 1960s, he can be seen using a black, hard-rubber model.) One might think that the metal mouthpiece created the edge in Coltrane's sound, but it's not that simple. Metal mouthpieces generally are very resonant and reinforce the upper partials, but do not by themselves determine the resulting tone. Lester Young, for example, used a metal mouthpiece on his famous recordings with Count Basie during the 1930s, and his ethereal sound was worlds apart from Coltrane's.

Coltrane experimented with different ligatures—the strap that holds the reed onto the mouthpiece. He also tried putting a piece of rubber on top of the mouthpiece, where the teeth hit. (Today one can buy such a strip at an instrument shop.) Reportedly, Coltrane was so fanatic about having a perfect connection with the instrument that he had his upper teeth filed into a slight curve so as to match the curve of the top of the mouthpiece. Coltrane talked about his setup: "I was in the habit of using extremely hard reeds, number nine, because I wanted to have a big, solid sound. And while playing with Monk I tried using number four. I very soon realized that the number nine limited my possibilities and reduced my stamina: with the four I had a volubility that made me give up the nine!" I don't know of any reed make whose numbering goes up to nine, but some mouthpieces do. Coltrane told Valerie Wilmer in 1961 that he used a hard reed, and that "my good ones usually last two weeks."

Coltrane articulated even his most rapid passages with great precision. This is accomplished through the use of the tongue on the reed. The fingers must be very accurate as well, so that the closing of the keys is coordinated with the tongueing. Coltrane told fellow saxophonist George Braith around 1966 that he also obtained clarity through "a definitive way of closing the keys" without relying as much on the tongue.

Except for early photos with Gillespie where he appears to be playing a King "Super 20" tenor, Coltrane was partial to Selmer saxophones—as are most professionals—and different Selmer models vary in sound quality and in ease of fingering. David Demsey and Carl Woideck, both saxophonists and educators, agree that in photos of the late 1950s Coltrane appears to be using the model known as a "balanced action," which was introduced in the mid-1930s and then revised around 1947. During 1960 Coltrane seems to have taken up the Mark VI model that Selmer had introduced in 1954. Shorter recalls that in the 1960s Coltrane had a brand-new Selmer that he tried out at a club in Manhattan. But he couldn't get the sound he wanted, so he drove all the way back to Huntington, Long Island — where he was living at the time — to get the old one. Coltrane was very dependent on having the right equipment.

On Coltrane's solos with the Gillespie small group in 1951, he exhibited a rich tone, a medium-fast vibrato, and pronounced use of portamento. Over the fears, his vibrato slowed down considerably. By 1955, Coltrane utilized a very slow and relatively narrow vibrato, lending a poignant delicacy to his sound. At faster tempos, Coltrane's tone became more raspy and intense. Despite enormous changes in repertory, Coltrane always sounded aggressive and virtuosic on fast numbers, serene, lyrical and sensitive on slow pieces. Compare, for example, "In a Mellotone" with Hodges from 1954 with "Don't Blame Me" of the same date; from 1957, "Time Was" with "While My Lady Sleeps"; from 1960, "Liberia" with "Central Park West"; from 1965, "Vigil" with "Welcome"; and, finally, from 1966, "Leo" with "Peace on Earth."

Coltrane's respectful approach to ballad melodies reflects a tradition before bop; the Parker way was to improvise double-time lines and fills in a ballad. Johnny Hodges was famous for his sensuous ballad paraphrases, with his own distinctive set of ornaments applied similarly each time. It is extremely likely that Coltrane learned much about ballad playing from Hodges, although he certainly learned as well from recordings of Lester Young. Young had a similar way of pacing himself on a ballad. A graphic illustration of Young's dichotomy of style as of September 1949 may be heard by comparing his frenetic solo in "Lester Leaps In," full of overblown low notes and guttural effects, with his pure, singing rendition of "Embraceable You" from the same concert.”