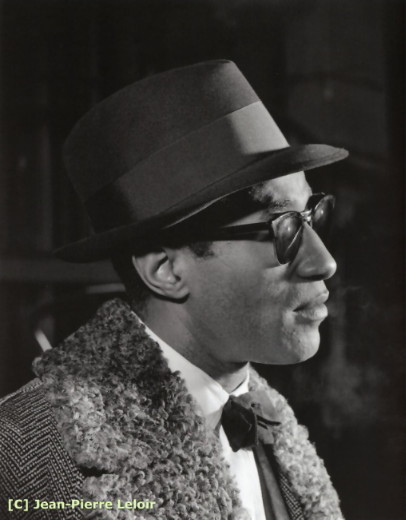 The late Paris-based jazz musician and International Herald Tribune writer Mike Zwerin posted a 41-week series entitled Sons of Miles to Culturekiosque Jazznet. In this series, Zwerin looks back at Miles Davis and the leading jazz musicians he influenced in a series of interviews and personal reminiscences. Here is the Max piece in that series. It was published on January 14, 1999 so add 20+ years to any math in the article.

“On July 14, 1988, Professor Max Roach, who has been called the Duke Ellington of the drums, stopped by his office during a lunch break while conducting his summer Jazz Studies Program for the University of Massachusetts in Amherst. He found a telephone message from a certain Dr. Hope in Chicago.

Roach did not know anybody named Hope in Chicago. He had been negotiating to appear at the Chicago Jazz Festival and he thought that it must have been something to do with that. But Dr. Hope said: "Professor Roach, you have been awarded a $372,000 MacArthur Foundation Fellowship. All we need is your Social security number."

"I'm still in a state of shock," Roach said a month later in his upper West Side apartment overlooking Central Park. "I didn't even apply. There was no warning. They don't tell you why they chose you. And they won't say who was on the committee."

The award is paid over five years and passed on the recipient's heirs should he or she die before the period is over. No reports or projects are required. Nominees, according to the foundation brochure, should "meet rigorous standards of excellence in their work, well beyond professional competence, even if such work is in its earliest stages. They must show great promise for future work. Although committee evaluation has to be based on achievement, the fellowship is not intended to be a reward but rather to foster new accomplishment... to provide hitherto unavailable opportunities."

An extraordinarily fit 64, Roach had been creating his own opportunities with remarkable resourcefulness. Building on the innovations of Kenny Clarke, he became the measure of excellence for bebop drumming. He worked with Ellington, Dizzy Gillespie, Charlie Parker and Miles Davis, and co-led a legendary quartet with the trumpeter Clifford Brown.

He rendered obsolete the old joke about a jazz quartet being "three musicians and a drummer." The critic Rafi Zabor wrote: "Over no other instrument has the influence of one man been as decisive as Roach's over drums for the past 30-odd years."

Roach explains the philosophy behind it: "I always resented the role of a drummer as nothing more than a subservient figure. The people who really got me off were dealing with the musical potential of the instrument."

In recent years he had worked solo, in duo, with his quartet, with a "double quartet" (four strings added) and with his percussion ensemble, M'Boom, and he wrote for and performed with multimedia projects.

Since he had already managed to do all this within, or despite, the capitalist system, you could wonder what kind of five-year plan he had for the additional $75,000 a year.

He explained by way of a brief biography: "My family moved from South Carolina to Bed-Stuy [the Bedford-Stuyvesant ghetto in Brooklyn] in 1928. Although the crash came a year later, and although the people were poor and disenfranchised, they had a lot of pride. Nobody was slick, everybody was honest. People went to church.

"I used to take musical instruments home from elementary school. There were some music teachers there - we all learned instruments. A lot of us got started in public schools. Charlie Parker and Bud Powell, for example. But now there are no more music teachers in public elementary schools. It's like (Senator) Moynihan said, 'benign neglect.' Just let it rot and fester.

"I'd like to use some of the MacArthur prestige and money to at least begin some of the statistical research necessary to present a plan to the city fathers to build a kind of cultural complex in Bed-Stuy. I'd like to build what I call an 'oasis.' It should be a pleasure to look at and to be in. I'd like to give something back to that community. Also, I'd like to have the time to work on my autobiography."

Roach is many things besides a great drummer: Civil, civic-minded, generous, healthy, intelligent, literate are appropriate adjectives. He said: "I've been through the whole mill. I've done everything everybody else did. I don't know if it was my parents prayers or what, but I gave up everything a long time ago. I don't smoke. I don't drink. I'm trying to take care of myself in my old age."

There was an ironic twist to the last sentence because in no way could he be described as old. There was also a hint of an unconscious plea not to be considered corny because he does not smoke or drink. You wondered if there wasn't somebody somewhere who wanted to make a film about a jazz giant who has not died some sort of tragic early death? He just came into a great deal of money - that might grab a producer somewhere.

After Roach had taught full time in Amherst from 1973 to 1979, Bruce Lundvall, president of CBS Records, who had just signed Dexter Gordon and Freddie Hubbard, called Roach and told him, "The water looks pretty good in New York now." So Roach went there and recorded two albums for CBS, both of which, unfortunately, "fell flat on their faces."

But he was weary of only relating to students, no matter how talented; he wanted to deal with his professional peers and they were in New York. He became an "adjunct professor" and proceeded to horrify the sort of people who hold on to the past for dear life when he recorded duos with the avant-garde musicians Archie Shepp, Cecil Taylor and Anthony Braxton.

"You used to play with Charlie Parker. How can you work with those guys?" he was asked by those who should know better.

"I answered this way," Roach said. "A person like an Anthony Braxton is more like Charlie Parker than a person who plays like Charlie Parker. Bird was creative and different and looked inside himself. He knew what Johnny Hodges and Benny Carter and the rest of them had laid down. That was the foundation. Bird built on that foundation.

"Now you have people like Phil Woods who preserve the tradition. And then there are people who push forward, who perpetuate the continuum by trying out things. Cecil Taylor is more like Art Tatum than a guy who plays like Tatum. It may not always come off, but that's what creativity's about. Anyway, by now people accept me for what I am."

In 1985, Roach won an Obie award for his music written for three Sam Shepard plays revived at New York's La Mama theater. After that Roach collaborated with the choreographer Alvin Ailey on "Survivors," a tribute to Winnie and Nelson Mandela.

Roach was preparing to record with the son of an old friend from Bed-Stuy, a young rapper by the name of Fab V Freddie. Roach considered rap "what took place after they removed the cultural enrichment programs from all the Bed-Stuys of the country." Through rap he began to putter with electronics, and he has bought a computer. He wanted to call the record "From Hip-Hop to Bebop."

Or was it the other way around? It can be hard to keep track of Max Roach and that's not only his charm but his great strength.”