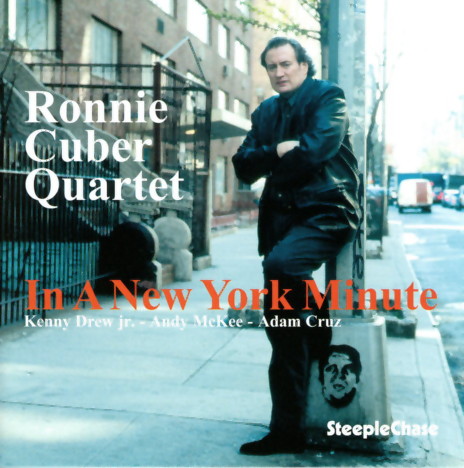 The baritone saxophone summit convened by Gary Smulyan on Saturday [10/8/2022] underscores the increasing presence of excellent players of the big horn in jazz today, but for a long time it was a fairly solitary occupation peopled by Harry Carney, Jack Washington, Serge Chaloff, Cecil Payne, Leo Parker, Gerry Mulligan, Pepper Adams, Nick Brignola, and Hamiet Bluiett. New York native Ronnie Cuber joined the procession in the early sixties, and for the next 60 years maintained a prominent place in hard bop and Latin jazz through his work with Maynard Ferguson, George Benson, Lonnie Smith, Lee Konitz, Eddie Palmieri, the Mingus Big Band, the Saturday Night Live house band, and a steady series of superb releases under his own name on Xanadu, Milestone, and Steeplechase. One of his most recent is with Smulyan on the aptly titled Tough Baritones; one of his greatest is this 1993 tribute to Pharoah Sanders.”

Collectively, they form an enjoyable retrospective of Ronnie playing over the last 30 years of his career. All are still available at reasonable prices should you wish to add them to your collection.

Most are Ronnie with piano, bass and drums rhythm sections, although he does combine with Ryan Kisor on trumpet to form a quintet album and mixes things up with a quartet recording featuring guitarist Ed Cherry and Hammond B-3 organist Brian Charette.

The tune and song selections make up a diverse repertoire of originals, selections from the Great American Songbook and mainstays of the Jazz Standards playlist.

The music is beautifully recorded [mostly in the studio but with one in performance recording done at the 2008 Berlin JazzFest] and taken collectively, these SteepleChase discs form a fitting tribute to one of the greatest straight ahead, hard driving bebop oriented soloists in the history of Jazz during the second half of the 20th century.

I’ve chosen to highlight Mark Gardner’s insert notes to Ronnie Cuber Quartet: In A New York Minute [SCCD 31372] because many of its tunes are available via Youtube so I can insert these in the feature enabling you to listen while you read. Mark, by the way, is British so please allow for this when you read the spellings.

“Baritone saxophonist Ronnie Cuber's first Steeplechase date, Airplay (SCCD 31309), offered a programme of mainly originals by the leader, emphasising his value as a composer as well as a potent soloist. In the enclosed set, taped exactly three years later, Ronnie is back with a completely different accompanying trio and a nice blend of further Cuber tunes plus some well known classics.

On this session Ronnie underlined his penchant for the bebop style of playing that he studied and absorbed so well many years ago. Mastering this particular form was difficult for all instrumentalists, but especially so for trombonists and baritone players because the nature of those horns makes them less flexible. Ronnie took his cue from such nimble exponents as Cecil Payne and Pepper Adams, while also listening attentively to tenor saxophonists like John Coltrane and Hank Mobley.

But he was never one to be over-influenced, sensibly realising that he needed to find his own path. This he did early in his career and became a complete individualist, a natural successor to the late and great Leo Parker whose tone was the forerunner of the Cuber sound.

His quartet for the aptly titled In A New York Minute, brought together the admirable Kenny Drew )r., whose playing grows ever more distinctive and personal with the passage of time, bass player Andy McKee and drummer Adam Cruz. Andy and Adam are no strangers having worked together in the Mingus Big Band.

McKee has been on the scene since the late 1970s when he played bass with Wall Dickerson and recorded for Steeplechase. Subsequently he worked with Philly Joe Jones, Elvin Jones, Billy Harper, Michel Petrucciani and many other prominent jazz figures.

Cruz has established himself during the 1990s via engagements with the Charlie Sepulveda Band, Hilton Ruiz, Paquito D'Rivera, Leon Parker and David Sanchez. He has performed on occasion with James Moody, McCoy Tyner and Ronnie Cuber.

The quartet jelled well, infusing the music with urgency and excitement while retaining melodic appeal and subtle touches. The inclusion of a brace of Ellington evergreens, a fine song by Johnny Mandel and a Miles Davis melody that should be aired more often provides ample evidence of Cuber's taste and understanding of the wider jazz repertoire. His own pieces are well conceived and resolved with plenty of harmonic interest.

In full cry, Cuber is rugged, direct and inventive. But in ballad vein he is capable of a delicate finesse and great tenderness. All his work is characterised by tremendous warmth and is totally free of pretension.

Dig, first recorded by Miles Davis on one of the pioneer long playing sessions back in 1951, is MD's clever variation on the Sweet Georgia Brown changes. Ronnie knows this territory intimately and his elaborations are filled with bop spirit and hipness. Kenny is right on the ball with his contribution and Adam adds some percussive points.

The engaging In A New York Minute turns out to be a most attractive Cuber line. Kenny shows touch and dexterity that were so much admired in his father's work. Note Ronnie's soft and subtle riffs during the piano solo, and then his gutsy and soulful wailing as the Minute ticks on. Don't be surprised if you find yourself shouting a "yeah" or two as the temperature rises! Andy keeps the lime moving in true New York fashion right to the close.

Con Passion was well named by composer Cuber for it has that air of hot-blooded romanticism, emphasised by the moving introduction. When the tempo starts to pop, Senor Cuber makes the big horn sing and sigh, laugh and cry, sweeping all before him. Kenny's segment sparkles and ripples with not a cliché in sight. Ronnie pours the love on again and bows out with stately grace.

His third compositional offering, Bu's Beat, is fastish modal stuff with nice modulations and a sting in the tail. The baritone's sounds so smoothly propelled and beautifully controlled that I was immediately reminded of the elegance of Cecil Payne in full sail. Kenny shifts easily too and is again prompted by bursts from the bari as the beat rolls inexorably forward. Neat solos are additionally supplied by the double A team of Andy and Adam (sweet thunder from him). Fade Down - to infinity.

Entering the familiar contours of Sophisticated Lady, perhaps Ronnie was thinking of Webster, Hodges, Carney and all the other great saxophonists who populated Duke's bands. He draws his portrait with respect and appreciation and no little lyricism. Similar sensitivity and insight are applied by Drew, whose touch is captured beautifully by engineer Josiah Gluck. A lovely coda from Ronnie is a fine finishing touch.

For Bari and Bass, a lively line, allows Cuber to show his nimble technique and imagination in impressive harness as he beeps and bops in an extended outing in which his inspiration never wanes for a split-second. It is an immensely impressive demonstration of his creative powers. Kenny trips through the changes deftly. Bass gets its chance too, in keeping with the title with Andy responding effectively. Ronnie makes it a long and delightful goodbye.

12/8 Thang, the final Cuber piece in this set, finds him at his most earthy and bluesy and wailing well to boot. Drew catches the mood and digs into a downhome groove to deliver a righteous sermon, dearly relishing the rhythmic lope. McKee reaches for his bow to deliver a resonant arco solo. The leader leads out his troops in a flourishing fashion. A good thang was had by all!

Mandel's Waltz Emily comes up fresh and sweet in the sympathetic hands of Mr. Cuber, who injects more than a few surges of adrenalin, to make Emily swing as she dances. Kenny clearly enjoys these changes and this melody to judge from his luminous improvisation.

The Juan Tizol Caravan has been padding across white hot desert sands for many a decade. Ronnie and company join the expedition en route to the next green oasis, but in their version those camels are really going! Kenny and Ronnie press on with all speed, serving up a brace of scintillating solos. Adam's percussive paces are displayed effortlessly and Ronnie's big-toned return indicates that the palm trees are on the horizon. And that ain't no mirage!

The end of another most impressive, highly musical and thoroughly absorbing album by the resourceful Ronnie Cuber. Fortunately in these technological times you only need to touch a button to relive the entire experience. Something you will find yourself doing many times, I'll wager.”