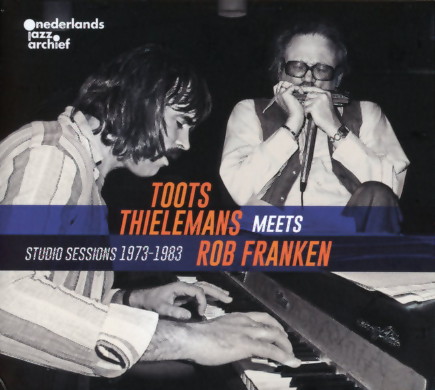 Toots Thielemans (1922-2016) would have turned one hundred years old on April 29, 2022. In collaboration with the Private Foundation Toots Thielemans, the Dutch Jazz Archive is publishing a unique edition of the studio sessions that Thielemans recorded with the Dutch pianist Rob Franken (1941-1983) between 1973 and 1983. The collaboration with Franken was essential for Thielemans in his musical development. He himself said about this: 'The Dutch pianist Rob Franken has taught me the most. His playing has become the most important part of what they call the typical Toots style.'

“Jazz fans nowadays might have a hard time believing that Columbia Records was once the most influential power broker in the genre. In 2021, that label (currently owned by Sony) had virtually no impact on the jazz scene. In the most recent Downbeat poll, Columbia didn’t even show up among the top ten in the voting for best jazz record label—and the few votes it did receive were almost certainly due to its reissues of older music. Frankly I can’t think of a single major jazz career Columbia has launched in this century.

But when I was a youngster, Columbia was home to the greatest stars in the music: Miles Davis, Thelonious Monk, Dave Brubeck, Charles Mingus, Herbie Hancock, Stan Getz, and so many others. And when I started digging into the early history of jazz, learning about the masterworks of Louis Armstrong, Duke Ellington, Billie Holiday and other revered artists, more often than not I found their best work on the Columbia label.

How did a label with such an extraordinary reputation and lineage fall so low? Usually these kinds of shifts take place gradually, and it’s hard to pinpoint the tipping point when a successful leader loses the way. But in the case of Columbia, the legend tells of the collapse happening on a single day.

If you run into jazz old-timers, you might even hear them talk about the “Great Columbia Jazz Purge” — that ominous moment when the most powerful record label in jazz decided that it didn’t really like jazz all that much.  … Ornette Coleman, Charles Mingus, Keith Jarrett, and Bill Evans. [were] allegedly dropped from the label on the same day in 1973.”

The lead-in paragraphs by Ted Gioia offer additional reasons why Mike Zwerin, the long-time Jazz columnist for the International Herald Tribune, asserted that Jazz went to Europe to live.

By the 1970s, when recording and performance opportunities for US-based Jazz musicians disappeared in the face of the onslaught of what today is referred to as “Classic Rock ‘n Roll,” many of them found opportunities to continue their careers abroad, especially in welcoming European countries.

The prevalence of American Jazz musicians in Europe also helped sparked the evolution of a generation of British, Dutch, Scandinavian, French and Italian Jazz musicians, many of whom appeared with their US counterparts, and some of whom established careers in their own right.

Increasingly, we learn about the scope and depth of this vibrant European Jazz scene in retrospect, especially with the waning of the 50 years copyright proviso, as large numbers of “from the vault” recordings are released of Jazz performances at JazzHaus in Liederhalle in Stuttgart, Ronnie Scott’s in London, recorded broadcasts by the SWR and WDR German radio orchestras, the Sesjun Radio and TV shows, Metropole and Concertgebouw Orchestras, Nick Vollebregt’s Jazz Cafe in Laren - all “live” performances of Dutch origin - and a host of albums by Paris-based Jazz artists including Andre Hodier, Guy Lafitte, Herbert Fol, Michel de Villers, Roger Guerin and Maurice Vander on the Jazz in France series on Fresh Sound Records.

And these are only some examples!! 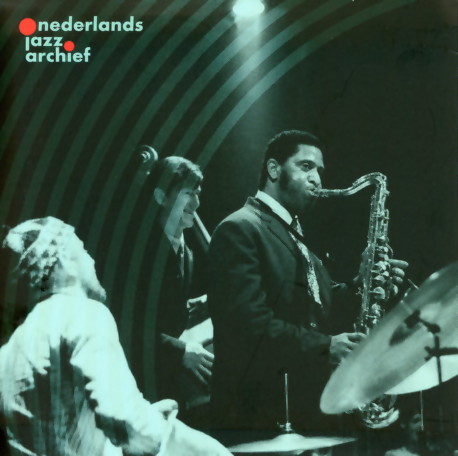 Recently this grouping has been enlarged to include are growing number of spectacular CDs under the supervision of the Nederlands Jazz Archief some of which are listed below: 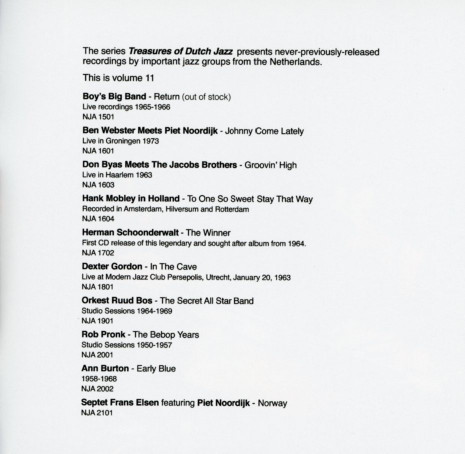 Which brings me to volume 11 in the Treasures of Dutch Jazz series that’s the basis for this feature Toots Thielemans Meets Rob Franken, Studio Sessions 1973-1983, Nederlands Jazz Archief.

Where to begin with this audio-visual feast?

I added “visual” because each of these “archief” treasures comes with many photographs of the musicians either from the actual session or concert as well as detailed track information and lengthy insert notes which are presented in both Dutch and English. In the case of the Thielemans/Franken 3 CD set, the annotations are by journalist Ton Ouwehand and producer - researcher Frank Jochemsen. Jan Brouwer and Wim Essed are associate producers for this offering from the Nederland Jazz Archief series.

When one first listens to these recordings, the meaning of this revealing statement by Toots Thielemans, who plays guitar, harmonica and whistles on these sessions, about Rob Franken’s approach to the Fender Rhodes piano becomes apparent:

“See what a guy like Rob Franken [1941-1983] achieves on his Fender piano, I have never heard anything like it in America. When I play with him, we click right away; together we are a whole orchestra.” - Toots Thielemans, 2 October 1982

Another way to put it is that Rob Franken was adept at playing the Fender Rhodes piano. Unlike many acoustic Jazz piano players who dabbled in electronic keyboards, Franken made the instrument his own. It was his primary vehicle for expressing himself and he explored to the fullest its sonic range and capabilities.

As for Toots Thielemans, the other principal on this three disc set, well, you can never get enough Toots.

He was at the height of his inventive powers during the ten years time-frame of these recordings. There has never been an artist quite like Toots in the history of the music and he takes every opportunity to demonstrate his virtuosity spurred on by his close artistic affinity with Franken.

Toots explains why this is the case in the following excerpt from the insert notes of a 2002 interview he gave to journalist Ton Ouwehand. They played together and hit it off. But what was the essential influence that Rob Franken had on Toots Thielemans' playing?

“I was convinced that my playing was old-fashioned. It was ragged, I thought, and Rob played his solos so beautifully. He was disparaging about it himself. They are only licks," he always said. One time Rob called me for a gig that would earn us 250 guilders. We had to go into the studio for two hours for recordings. 'When I listened to the recording, what Rob played sounded so fresh. I went off with a copy of the tape and started editing it. Until I had a tape with only Rob Franken's solos. I put them on a cassette tape and studied them. I analyzed and learned the vocabulary he used. That helped me a lot.”

The “beats” generated by these rhythm sections range from the Disco Rock which was in vogue in the 1970s when most of these recordings were made to the straight ahead metronomic time keeping favored by modern Jazz artists.

The music is a delightful combination of Jazz standards including Charles Mingus’ Goodbye Pork Pie Hat, Sonny Rollins’ Oleo and Lee Morgan’s Sidewinder, among many others, and Great American Songbook classics including Body and Soul, Just Friends and There’s No Greater Love - all familiar melodies that give the listener a place to set their ears before delving into a bevy or original compositions by Rob and Toots, including a sparkling version of the latter’s Bluesette.

One group of tunes and songs have a title that I’ve never encountered before - FUMU.

“Fumu,'' he said, “functional music. Background music to be heard in the supermarket, hotel lobby or lift. Body and Soul, One Note Samba, songs like that. We recorded it all in one go. The theme and then we both did a chorus. We hadn't prepared anything.”

Fumu is further described by producer and researcher Frank Jochemsen in the booklet notes:

“Between 1972 and 1983, Rob Franken was the lead in the so-called Fumu sessions. Functional Music was used as background music in shopping malls, hotels, lifts, department stores and airports. He recorded the music for this ongoing project in some of the best Dutch recording studios.

Franken arranged the sessions, played Fender piano and synthesizers and drew on his immense network of musicians to collaborate. In truth, these recordings were often nothing less than inspirational short jam sessions, with contributions from the best Dutch jazz musicians of the seventies. Unfortunately, when Rob Franken died unexpectedly at 42, this enormous production ended abruptly.

The master transfers of all Functional Music recordings by Rob Franken were stored at the Dutch Jazz Archive and digitized in high resolution, so here we are.”

From every perspective, the musicianship, the music, the quality of the audio and the photographs and informational material, the Nederlands Jazz Archief have made available a veritable treasure trove of great Jazz in their production of volume 11 in the Treasures of Dutch Jazz series - Toots Thielemans Meets Rob Franken, Studio Sessions 1973-1983, Nederlands Jazz Archief.

This would make a wonderful holiday gift for the Jazz fans among your family and friends.