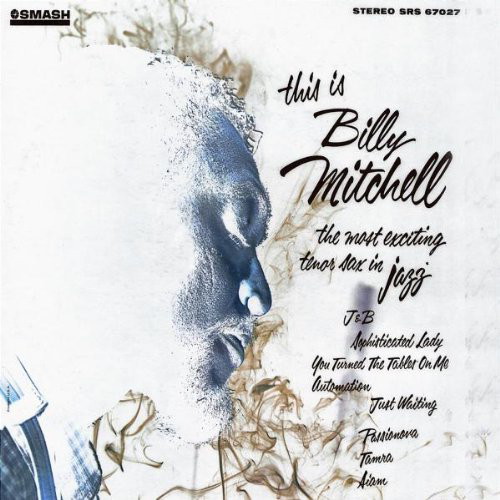 Billy Mitchell’s musical story is a tale of two cities: Kansas City, Missouri where he was born and Detroit, Michigan where he grew up.

What the tenor saxophonist inherited from K.C. and the Motor City can be heard every time he takes a chorus. This inheritance is the roots of the Jazz tradition.

"I had a band at the Blue Bird," Mitchell recalled in a conversation with Jazz author Bob Blumenthal. "It was a quartet until Thad sat in one night. The next night, he was working with us permanently. We recorded for Dee Gee Records, which was jointly owned by Dizzy Gillespie and Dave Usher. At that time, Terry Pollard was in the band — she was later replaced by Tommy Flanagan — and she played vibes and piano. When she took a vibes solo on the recording session, Thad comped for her on piano. Elvin was in the band at that time, too. In fact, Elvin had never played in a professional band before that."

The Mitchell session is a rare one, having last appeared in the '50s on a Savoy anthology called SWING, NOT SPRING, and the details are obscure. Discographies have given 1948 as its date, though Mitchell confirms that it was more likely done in 1951 or '52.”

Billy was to become best known for his work in the 1950’s and 60’s with Dizzy Gillespie’s Big Band and The Count Basie Orchestra. He also performed with the Clarke-Boland Big Band in Europe on several occasions.

Mitchell and trombonist Al Grey left Basie in late 1961 and formed the Al Grey/Billy Mitchell Sextet, which won the Downbeat Award for best new jazz band of 1962! This band also officially introduced vibraphone future star Bobby Hutcherson. Barry Kernfeld noted in The New Grove Dictionary of Jazz that this “... ensemble, in its use of swinging riffs and bop improvisation, captured in a small group context the essence of Basie’s orchestral approach.

Besides leaving and rejoining Basie's band several times in the 60's, Billy was an important figure on Long Island (his home) and Manhattan in the educational area of jazz; he was mentor and friend to alto saxophonist Charles McPherson and also worked for a time in Los Angeles where he and influenced LA trombonist/composer-arranger Richard Pulin.

With his bright, bouncy, on-the-beat improvisations, Billy has always personified Joyous Jazz to me. Jazz that’s not complicated and swings in a straight-ahead manner. It’s fun to play the music this way and equally as much fun to listen to it without having to reach for it.