Rahsaan Roland Kirk - The Ineffable [From The Archives]

Thanks to the largesse of the Copyright Gods, the editorial staff at JazzProfiles was recently allowed to once again use the video that forms the closing tribute to Rahsaan, so we thought we'd celebrate this event by re-posting this piece. 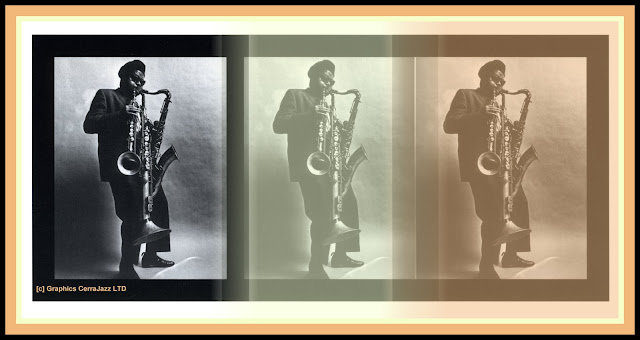 “… Rahsaan Roland Kirk … [used] circus like multi-instrument playing to foment his own version of an improvisational revolution.”
- Don Heckman, in Bill Kirchner, ed., The  Companion to Jazz,
[p. 610]

If, as Louis Armstrong said, “Jazz is who you are,” then the music of Rahsaan Roland Kirk was a pure reflection of his eclectic, eccentric and exuberant personality.

In fairness, none of these descriptors do justice to Rahsaan for he was ineffable – beyond words.

Blind from infancy, his musical achievements were stunning in their complexity.

Perhaps the most apt representation of Rahsaan Roland Kirk is that he was a Force of Nature.

As is often the case with such larger-than-life personalities, his strengths could also be his weaknesses.

“A stellar soloist, … [Kirk] could play with authenticity and forcefulness in any jazz style, from trad to free, and on a host of instruments—not just conventional saxes and clarinets but pawnshop oddities such as manzello, stritch, siren whistle, and nose flute. Kirk's arsenal of ef­fects was seemingly endless, ranging from circular breathing to playing three horns at once. This versatility came, in time, to be a curse. Had he focused on one or two instruments, he would have been acknowledged as a master. Instead he was too of­ten dismissed as little more than a jazz novelty act.”  - , The History of Jazz, p. 329

The view of Kirk as a significant innovator is one that is widely supported by a large number of notable Jazz musicians and writers as evidenced by the following anecdote involving the late, alto saxophonist, Paul Desmond as told by Doug Ramsey:

“Taking in one incredible jam session in the ballroom of the Royal Orleans Hotel [during the 1969 New Orleans Jazz Festival], we witnessed Roland Kirk surpassing himself in one of the most inspired soprano sax solos either of us had ever heard. Kirk used Alphonse Picou's traditional chorus from "High Society" as the basis of a fantastic series of variations that went on chorus after chorus. We were spellbound by the intensity and humor of it and Paul announced that henceforth he would be an unreserved Roland Kirk fan even unto gongs and whistles.” Jazz Matters, [p.151].

It isn’t easy to listen to Rahsaan Roland Kirk’s music.

You really have to want to and you have to work at it.

It’s complicated and sometimes it’s harsh and full of distress – very often, it does not lay easy on the ears.

“Kirk’s playing is all over the place from haunting blues derived themes to polytonal appendages; he executes difficult tempos with quite astonishing dexterity; he moves across chords with a bizarre, crablike motion; a heavy, sometimes massive sound, often vocalized and multiphonic; Kirk is Kirk and it would be a mistake to expect smoothly crafted Jazz. [paraphrase]”
- Richard Cook & Brian Morton, The Penguin Guide to Jazz on CD

Fortunately, for those who are inclined to take-on the challenge that is Rahsaan, much of his music has been collected in two anthologies: [1] Rahsaan: The Complete Mercury Recordings of Roland Kirk [10 CDs, Polygram 846-630-2] and [2] Does Your House Have Lions? [2 CDs Atlantic Rhino R2 71406]. 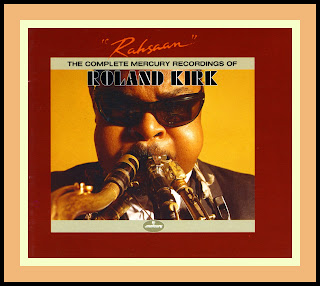 The Mercury compendium contains as an added benefit, a comprehensive treatment of the formative years of Kirk’s career and the defining characteristics of his early music by , the Director of the Institute for Jazz Studies at .

In their Penguin Guide to Jazz on CD, Richard Cook and Brian Morton said of Morgenstern’s notes that they “… afford unparalleled detail on perhaps the most significant phase of Kirk’s career.”

Here are the opening paragraphs from Dan’s extensive insert notes.

“Roland Kirk — or Rahsaan, as he preferred to be called in his later years — was a unique phenomenon in the history of music. To be sure, he was not the first to play several instruments simultaneously, Wilbur Sweatman, a pioneer of early jazz, played three clarinets at once, and so did Ross Gorman (known for the opening clarinet glissando on the first recording of "Rhap­sody in Blue") and Fess Williams. But these men used it as a showmanship trick, not for creative purposes. In that respect, Kirk came first, and his few emulators and imitators have not been serious competition.

Moreover, that was just one aspect of Kirk's total tonal personality. He mastered every instru­ment he played, and had his own approach to all of them. And every note he played or sang swung to the hilt. His imagination and energy were awesome, and he channeled all he had in him into his music.
When he wasn't playing, he listened — to music of all kinds, to the sounds of nature, to everything around him.

When he wasn't making or listening to music, he talked about it, and when he slept, he dreamed about it — the idea of playing more than one instru­ment at a time came to him in a dream, he claimed. Of course he also had time for other things — women, children (he loved them, most of all his own), and good food and drink, which he consumed prodigiously. But in a lifetime of knowing musicians and lovers of music, I have never met anyone so totally involved in the world of sound as Rahsaan Roland Kirk.

…. He never limited his horizon to what was "in" or fashionable, and his playing reflected his deep understanding of the music's past, present and future.” 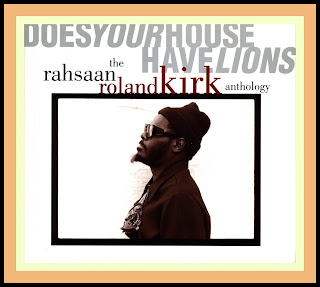 The title given to the later, Atlantic anthology is explained in the following story by its producer, Joel Dorn:

“One day in the late 1960’s, I was on the phone with Rahsaan and mentioned to him that just that day I had bought a house. He responded by asking: ‘Does your house have lions?’ I said: ‘What?’ He said: ‘Lions you know like in front of a museum or the post office. You know, concrete lions. Get a house with lions.'” – May, 1993

Joel goes on to add:

“I can honestly say that Rahsaan changed my life. When I first saw him in the ‘70s [Rahsaan died in 1977, he was only 41 years old], it was the greatest thing I’d ever seen … it was like watching a hurricane on stage. The energy was far heavier than anything I was seeing in the punk rock world. Yet it took you somewhere. The contrast of anger and beauty was incredibly affecting; it had a healing effect. … After a Kirk set, I would feel that I had taken a long journey, and it left you with hope.  This is what I always believed music could do, and I became obsessed with him. His records lived up to his live shows, yet they were all different.”

In addition to the writings of  and Joel Dorn, Garry Giddins lends his literary gifts and encyclopedic knowledge of Jazz to an excellent profile on Rahsaan Roland Kirk which you can locate on pages 431- 436 of his seminal Visions of Jazz. 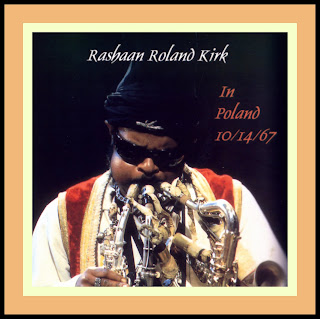 “No one who experienced him in performance can forget the sight: a stocky blind man swaying precariously back and forth on the lip of a bandstand, dressed in a yellow jump suit, his face implacable behind black wraparounds, blowing dissonant counterpoint on three saxo­phones of varying lengths, while other instruments, some of his own invention, dangled from his shoulders, neck, ears, and, on occasion, his nose. Talk about one-man bands.”

“By now [Roland’s 1960 Chess LP Introducing Roland Kirk] , Kirk had his basic ar­senal. In addition to tenor, he played an obsolete cousin to the soprano sax that he called a manzello, a straightened alto with modified keys that he called a stritch, a siren, a whistle, and, a conventional flute. He found the manzello and stritch in the basement of an old instrument store and taught himself to finger two saxophones while using the third as a drone. In this way, he could play a variety of reed-section voicings and accom­pany his own solos with stop-time chords.”

“Kirk rejected the total immersion in protracted improvisation preached in Ornette Coleman's Free Jazz and John Coltrane's "Chasin' the Trane," but he did embody a prophetic refusal to relinquish the lusty pleasures of big bands (albeit a one-man version), swing, lilting waltzes, and nostalgic ballads, all of which he made aggressively new.”

Rahsaan Roland Kirk was a Jazz World onto himself.

You are sure to be exhilarated when you step into it, but don’t forget to breathe as it’s like nothing you’ve ever experienced before.

The following video tribute to Rahsaan provides a mere sample, at best.