I’ve never met tenor saxophonist Scott Hamilton, but there are three things that I know we have in common: [1] we both hail from Providence, RI; [2] we both share an affinity for mainstream, straight-ahead Jazz; [3] we both enjoy listening to pianist Rein de Graaff’s trio with Marius Beets on bass and Eric Ineke on drums.

The first is a matter of public record; the second and third were reaffirmed by the recent arrival of Scott Hamilton and the Rein de Graaff Trio at The Jazz Room, Breda, The Netherlands [Jazzroom Breda Stereo C15175].

Writing in The New Grove Dictionary of Jazz, Chris Deffaa had this to say about Scott’s background and style.

“Scott Hamilton was born in Providence, RI, September 12, 1954). He began playing tenor saxophone at the age of 16, and in 1976 moved to New York, where he quickly gained public and critical acclaim. He has performed and recorded as the leader of a quintet with the guitarist Chris Flory, the drummer Chuck Riggs, the double bass player Phil Flanigan, and the pianist John Bunch; except Bunch, all these musicians worked with Hamilton in Providence.

In 1976 he began an association with Warren Vache which has continued into the 1980s. The two musicians have recorded many albums together and worked as sidemen with Benny Goodman (from 1977), Rosemary Clooney (periodically from 1978), and Woody Herman (at intervals in the 1980s). From 1982 Hamilton has worked with Ruby Braff. He has also performed with such touring bands as the Concord Jazz All-Stars, the Concord Superband, and the Newport Jazz Festival All-Stars, almost invariably with Vache.

Hamilton's playing, although not derivative, is an extension of the tradition established by Coleman Hawkins, Ben Webster, and Illinois Jacquet. He is a gifted improviser, and is capable of transforming the most unlikely material into memorable music. His relaxed, elegantly constructed solos… [are a trademark] of his playing.”

And has Richard Cook and Brian Morton have remarked The Penguin Guide to Jazz on CD, 6th Ed.:

“ … [Scott Hamilton] doesn't double on soprano, bass clarinet or flute. He probably doesn't know what multiphonics are. He has never been described as 'angular', and if he was ever ‘influenced by Coltrane' it certainly never extended to his saxophone playing. And yet Scott Hamilton is the real thing, a tenor player of the old school who was born only after most of the old school were dead or drawing bus-passes. His wuffly delivery and clear-edged tone are definitive of mainstream jazz, and the affection in which Hamilton is held on both sides of the Atlantic is not hard to understand. And yet what he does is utterly original and un-slavish, not in thrall to anyone.”

I’ve heard Scott in performance and on record and each time I do, I have this image in my mind, real or imagined, of him planting his feet, rearing his head back while taking a deep breath and then blowing swinging sounds out of his tenor saxophone. 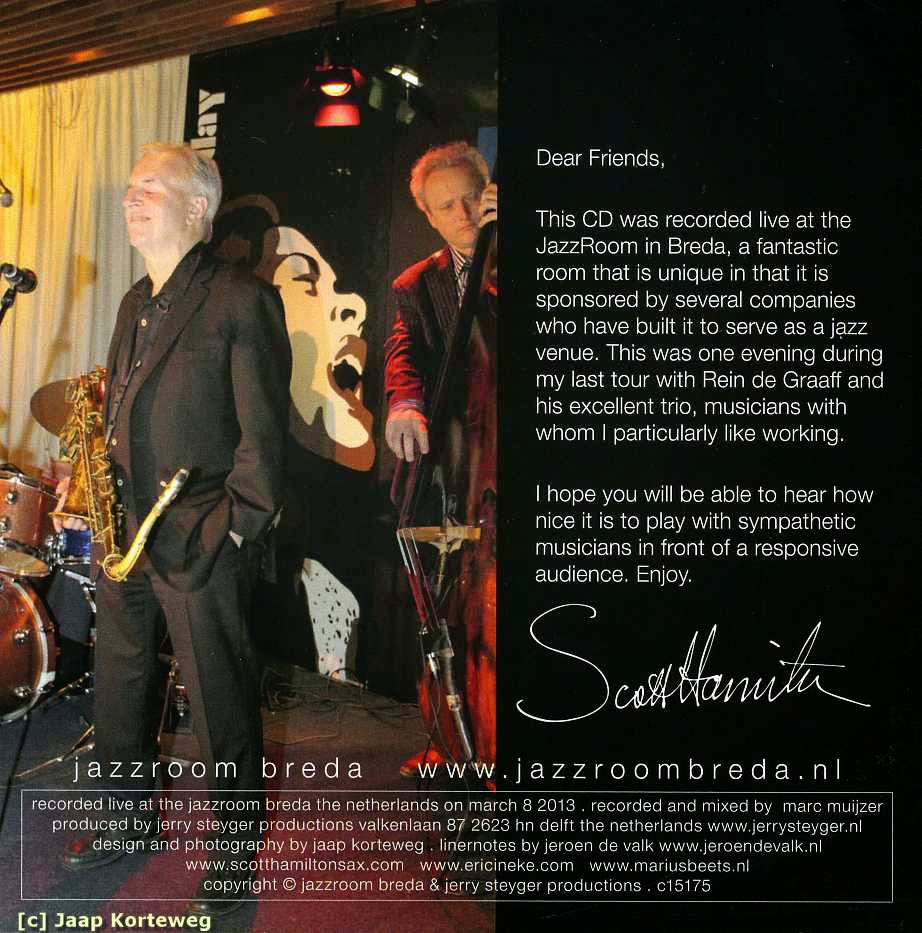 As for his affinity for working with Rein, Marius and Eric, checkout the look of pleasure on Scott’s face as he listens to them do their thing in this photograph taken during their engagement together at the Jazzroom in Breda, The Netherlands. One would venture to guess that Scott seems to be experiencing the musical equivalent of pure bliss and you will too while listening to this CD.

Both as individual soloists and as a powerful and pulsating rhythm section, the piano-bass-drum trio of Rein de Graaff, Marius Beets and Eric Ineke are as good as it gets if your taste in Jazz runs to the straight-ahead, bebop-inflected style of the music.

Another aspect of this CD that makes it so appealing is that the selected tunes and the way in which they are sequenced create an atmosphere for the listener of experiencing the perfect hour-long set [or, these days, show]. 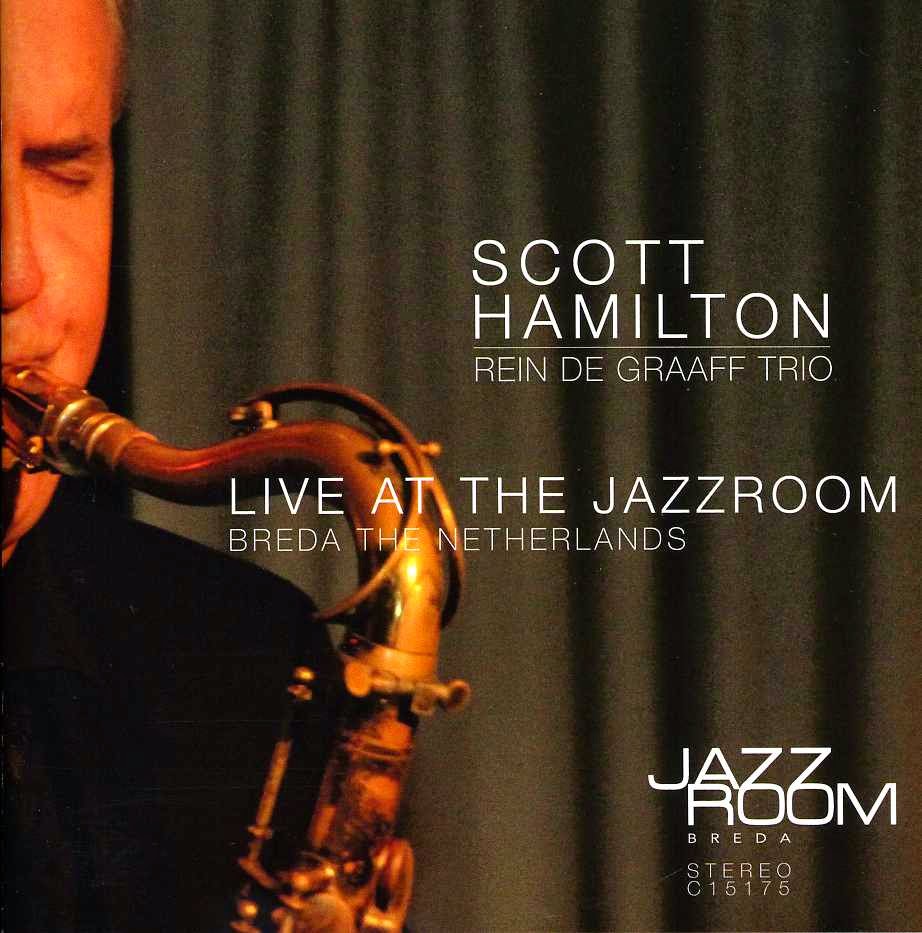 Comprised of three evergreens from The Great American Songbook and four Jazz Standards, the music on  Scott Hamilton and the Rein de Graaff Trio at The Jazz Room, Breda, The Netherlands moves along effortlessly to the point where you really never want it to end, yet when it inevitably does, you know that you’ve just heard some superbly rendered music played by four, masterful Jazz musicians.

In his sleeve notes to the CD, the noted Jazz author and critic Jeroen de Valk offers this background and these observations about this effort by Scott, Rein, Marius and Eric:

“This CD proudly features tenor saxophonist Scott Hamilton with the Rein de Graaff Trio and was recorded live at the JazzRoom Breda to celebrate its 10th anniversary. For a decade now, this cozy and intimate jazz club has been presenting high-caliber jazz artists such as Deborah Brown, Ronnie Cuber and Peter Beets, to name a few. According to musicians, the JazzRoom Breda is ‘the real thing.’

The atmosphere is informal but the audience is attentive and appreciative. As pianist Rein de Graaff puts it: ‘It is an old-fashioned jazz club supported by local businessmen. They just get together because they love that kind of music.’ …

Scott, while on tour with the trio, decided to shift from the swing repertoire to some early bebop tunes like "Apple Honey" (based on the chord progressions of "I Got Rhythm" and is a mainstay in the Woody Herman repertoire), "Move", "Groovin' High" and the more relaxed tune "Good Bait". To these, he also added these timeless evergreens: "Flamingo", "Speak Low" and "Darn that Dream".
The ballads find Scott going back to his swing heroes while the renditions of "Move" and "Apple Honey" fall somewhere in between bebop and the crowd-pleasing expression of swing tenor Illinois Jacquet.”

Scott offered his thoughts about the Jazzroom and about his musical cohorts when he wrote:

This CD was recorded live at the Jazzroom in Breda, a fantastic room that is unique in that it is sponsored by several companies who have built it to serve as a Jazz venue. The CD was made during one evening [March 8, 2013] of my last tour with Rein de Graaff and his excellent trio, musicians with whom I particularly like working.

I hope that you will be able to hear how nice it is to play with sympathetic musicians in front of a responsive audience. Enjoy.

Jazz fans can purchase the CD by emailing info@jazzcenter.nl and requesting pricing and shipping for Scott Hamilton and the Rein de Graaff Trio at The Jazz Room, Breda, The Netherlands [Jazzroom Breda Stereo C15175].

The following video will provide you with views of the Jazzroom itself, photographs of the musicians and an opportunity to listen to the Flamingo track from the CD.

Flamingo, a ballad by Ed Anderson and Ted Grouya, was first recorded in 1941 by vocalist Tony Martin with David Rose’s Orchestra and the tune has been a favorite of Jazz artists from Duke Ellington to Stan Getz ever since. This version contains one of the best bebop piano solos I’ve ever heard. Rein’s playing on this track just knocks me out. With Marius and Eric really “stepping on” the time, and Scott not missing a beat when he comes in for his solo, this performance will swing you into next week.