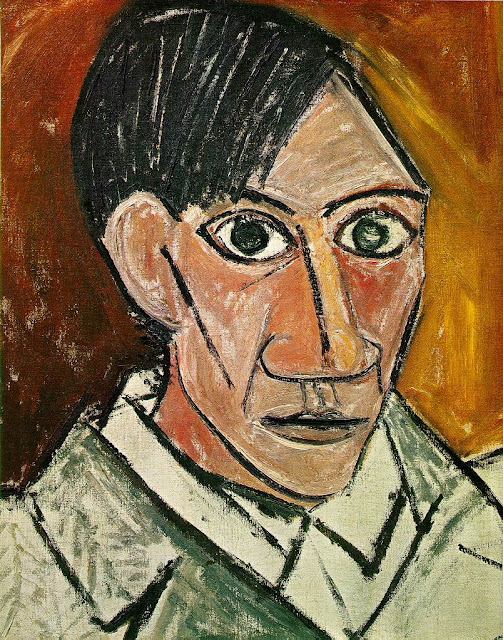 Say the name “Pablo” in the context of 20th century Arts and Letters and the name “Pablo Picasso” springs to mind. It did for me as you will no doubt see when you view the video montage that closes this piece.

But as Stephanie Stein Crease explains in the following excerpt from her definitive Gil Evans: Out of the Cool - His Life in Music, Gil Evans had a different “Pablo” in his thoughts when he composed Blues for Pablo, the theme for the music that accompanies the video.

"Blues for Pablo," written in tribute to a fallen fighter in the Spanish Civil War, successfully uses alternating themes and rhythmic feels — in this case, Spanish bolero and swing — a practice that would become more common in jazz as the 1950s progressed. The composition juxtaposes a Spanish-inflected minor theme and an extended major blues, swinging loosely from a half-time feel to straight 4/4 and back. The opening theme, complete with tremolo, derives from the opening measures of [Manuel de] Falla's Three-Cornered Hat (this theme also appears, somewhat altered, in the ending of Evans's arrangement of "La Paloma"). A Mexican folk song inspired the other main theme. To Gil's astonishment, the musicians found the quirky rhythm difficult for improvisation. "Now, the kind of rhythmic changes that tune went through are very common in jazz. But at that time, I remember bringing in a number in 3/4 and someone said, 'I couldn't improvise in three'—my goodness!" [The quotation is drawn from Gil’s interviews with Stephanie].

To the best of my knowledge, Blues for Pablo first appeared on Miles Ahead which was also released as Miles Davis + 19 [Columbia CL 1041; CK 40784], although with the work of Ryan Truesdell which seems to continue to “unearth” troves of Gil Evans’ earlier manuscripts, who knows, there may still be an earlier version hidden away out there. Blues for Pablo encapsulates much of what I find intriguing about Gil Evans’ writing, especially the melancholy feelings it seems to evoke.

Gil discusses his penchant for pensive sadness and other aspects of his arranging style in the following excerpts from a 1986 interview that aired on Ben Sidran’s NPR radio program [Ben’s interview with Gil along with 42 others are available both in book form an on CD as Talking Jazz: An Oral History]:

“[I joined Claude Thornhill’s band in 1946]. It was a wonderful workshop for me.
It had three trumpets and two trombones and two french horns and two altos, two tenors, baritone and a separate flute section, right? Three flute players, didn't play anything but flutes. And a tuba. So it was a big nut for him, and he finally had to give it up.

Ben: Was it Claude's idea to include the french horns and the tuba, initially?

Gil: The french horns were his idea, yeah. But the tuba, I got that in there. And the flutes. But the french horns he had quite a while. He had them before the war, too, you know.

But the band sounded like horns anyway, even before he got them. It was one of the first bands that played without a vibrato, you know. Because the vibrato had been "in" all the time in jazz, ever since, well, Louis Armstrong, you know, that vibrato. But then Claude's band played with no vibrato and that’s what made it compatible with bebop. Because the bebop players were playing with no vibrato. And they were interested in the impressionistic harmony [French composers Debussy, Ravel, et al], you know, that I had used with Claude. The minor ninths and all that.

That's how we got together, really. That's the reason we got together. Because of the fact that there was no vibrato plus the harmonic development. Because up until that time, with the swing bands, mostly the harmony had been from Fletcher Henderson, really. Where you harmonize everything with the major sixth chords and passing tones with a diminished chord, you know. So that was how things changed with bebop.

Ben: Also, the addition of the french horns and the tuba got the arrangements out of the more traditional "sections" — brass section, woodwind section — and made it more of a continuous palette for you.

Gil: Well, when Miles and I got together to do the Capitol record [Birth of the Cool] we just had to figure out how few instruments, and which ones, we could use to cover the harmonic needs of Claude Thornhill's band, you know. Naturally with a big band like that, you have a lot of doubles. But we just trimmed it down to the six horns. Six horns and three rhythm, and those six horns covered all the harmonic needs that we had. ...

We talked a lot about harmony. How to get a “sound” out of harmony. Because the harmony has a lot to do with what the music is going to “sound” like. The instruments have their “wave” form and all that, but the harmony means that you're putting together a group of instruments, and they're going to get their own independent waveform, right? You can't get it any other way except as an ensemble together. So Miles and I talked about that lots of times. And played chords on the piano. And that's how it happened.

Ben: The "sound" that you did come up with so perfectly suited Miles' sound that it almost seemed like one gesture.

Ben: When you finally went in to record Miles Ahead in 1957, again the arrangements were "seamless," and they were almost a translation of Miles' "sound" into orchestral terms. At the same time, I remember some little things that you did that were very distinctive. For example, at the end of the song "Miles Ahead," there's an ensemble trumpet figure that's used almost as an acoustic guitar, a Spanish guitar. There were a lot of things like that in your writing that were very unusual, very deceptive.

Gil: Right. People used to think there were strings in those albums. Even somebody as knowledgeable as Gordon Jenkins. Now you know he wrote for strings all the time. He called me up to tell me how he liked it, and he thought there were strings. And I thought, "Gee, that's funny. Imagine him thinking there are strings." Because he wrote for strings, wow, I've seen him. And he had such a feeling for those things. He'd have a big string section, and they'd all be playing an ensemble that he'd write for them with Louis Armstrong in mind, you know?

Gil: I was waiting for Miles, basically, I was.

Ben: It's so romantic. It sounds like a love affair when you say that.

Ben: Much has been made in the past about how Duke Ellington would write for an individual, as opposed to just bringing different people to his notes. Is this in that tradition?

Gil: You know, I never knew Duke. But one day, he called me, you know. To tell me that I was his favorite jazz orchestrator. It was really nice. It really made me feel good. But we got some very bad reviews on that album too, you know. The Miles Ahead album, when it first came out. Wow. They called it the "anti-jazz" album. Stuff like that.

Ben: Well the Birth of the Cool sessions got the same sort of reaction too, didn't it? Critics said it was "devoid of emotion."

Gil: Yeah. We're all victims of the terrible habit of convenience, right? And when you are used to hearing a certain type of music or a certain “sound” of music, and it changes, and you are not with it, or don’t follow it any more, you’re home and you stop going out to clubs and all that … we all suffer from an overdose of convenience at the expense of passion, right?” …

Gil: Yeah. They're all melancholy. That's one of my characteristics.

Ben: Perhaps that's at the heart of your great compatibility with Miles. Miles is, the voice of melancholy.

Gil: That's how we got together, basically. Really. The "sound," you know. The "sound" is the thing that put us together immediately, and it's always been like that. It's still the same way today. Even if we don't see each other very often, we're still life-time friends. On account of the "sound."”

The following video features Henk Meutgeert’s treatment of Gil’s Blues for Pablo as performed in 2009 by the Jazz Orchestra of the Concertgebouw at The Bimhuis in Amsterdam, The Netherlands. Wim Both does the honors on trumpet. Henk reorchestrated Gil’s original arrangement because the JOC’s instrumentation was different than that used on the original 1957 Miles Ahead recording.

It is no less delightful.