Goings on At Pops' House

Obviously, the following notification falls more favorably to those who live in New York City or have easy access to The Big Apple, but Jim Eigo of Jazz Promo Service relayed  the following information and I thought I would put it up on the blog because nothing pleases me more than talking about Pops on these pages.


Celebrate Jazz Appreciation Month at the Louis Armstrong House Museum and the 60th Anniversary of Edward R. Murrow’s Satchmo the Great
Receive Rare Print of Louis Armstrong’s
First Arrival In Africa in 1956
Visitors to the Louis Armstrong House Museum will get a rare treat this April to celebrate Jazz Appreciation Month.  The museum will give all visitors a rare print of Louis’s first arrival in Africa in 1956, a tour immortalized in Edward R. Murrow’s film, Satchmo the Great (while supplies last).  City University of New York (CUNY) students will enjoy free admission all month long and New York City public school children and their families will enjoy free admission during Spring Break, April 23 – April 30. 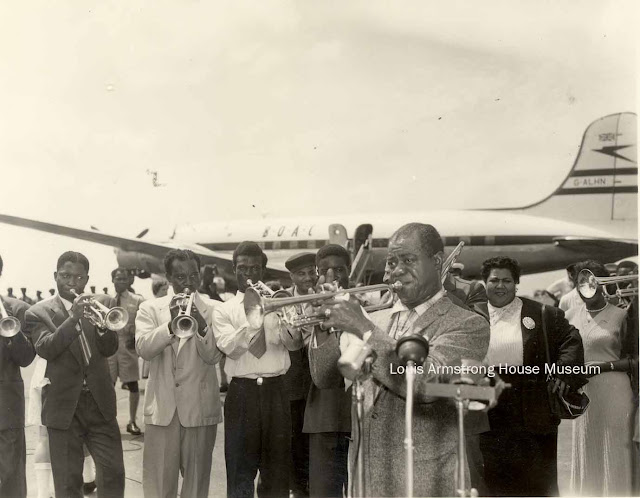 This rare photo from the museum's Ernie Anderson Collection depicts a major moment in Louis Armstrong's career: his arrival in the Gold Coast of Africa (soon to become the independent nation of Ghana) in May 1956. Armstrong had never been to Africa before and when he arrived, his airplane was met by a mob of spectators, including thirteen trumpeters playing a traditional African song, "Sly Mongoose," retitled "All for You, Louis" for the occasion. The photo depicts the moment Armstrong pulled out his horn to play along, a momentous meeting of the two cultures. It was saved by Armstrong's longtime publicist Ernie Anderson and was acquired by the Louis Armstrong House Museum in 2012. The photo has never been exhibited or published until now for Jazz Appreciation Month 2016.  It stands a special reminder of Armstrong's power as America's "Ambassador of Goodwill," an appropriate message for Jazz Appreciation Month and International Jazz Day.
International Jazz Day, April 30th Special Screening of Satchmo the Great

The museum’s Jazz Appreciation Month programming culminates with a special Jazz Day Screening of Edward R. Murrow’s Satchmo the Great in partnership with the Museum of the City of New York.  Satchmo the Great was created by famed broadcaster Edward R. Murrow who followed Louis Armstrong around the world, filming him in Paris, Sweden, Switzerland, England, and Africa, before returning back to New York for an unforgettable performance of "St. Louis Blues" with the New York Philharmonic, conducted by Leonard Bernstein. This film captures "Ambassador Satch" at his 1950s peak, entertaining 100,000 fans in the Gold Coast of Africa, playing his big hit "Mack the Knife" in London, and humorously explaining the definition of a "cat" in a rollicking Paris interview with Murrow. Ricky Riccardi, Director of Research Collections at the Louis Armstrong House Museum, will introduce the film, which has not been commercially available since its original theatrical release in 1956.
Satchmo the Great will be screened on Saturday, April 30, 2016 at the Museum of the City of New York located at 1220 5th Avenue, New York, NY 10029 from 3:00 pm – 5:00 pm.  Tickets are $16 ($12 for seniors and students) and can be reserved online at www.mcny.org.  The museum can also be reached at 212.534.1672.


Planning Your Visit to Louis Armstrong House Museum
The Louis Armstrong House Museum is located at 34-56 107th Street in Corona, Queens, New York. The museum is open Tuesday – Friday from 10:00 am to 5:00 pm and Saturday/Sunday from 12:00 noon – 5:00 pm.  No reservations are necessary for individuals but groups of 8 or more should call 718.478.8274 or visit LouisArmstrongHouse.org to make a reservation.  Parking is available within the neighborhood and the museum is accessible by subway via the 7 Train.
Admission is $10.00, $7.00 for seniors, students and children and free for LAHM members and children under 4. Groups with reservations enjoy a discount on admission.  In celebration of Jazz Appreciation Month, all CUNY students with valid ID enjoy free admission for April 2016 (2 guests per ID) and all New York City public school children and their families can enjoy free admission during Spring Break, April 23 – April 30, 2016.
Louis Armstrong House Museum
Thanks to the vision and funding of the Louis Armstrong Educational Foundation, the Louis Armstrong House Museum welcomes visitors from all over the world, six days per week, 52 weeks per year.  The Louis Armstrong House Museum is a member of the American Alliance of Museums, Association of African American Museums, Museums Council of New York City, New York State Museums Association, National Trust for Historic Preservation, NYC & Co., the Queens Chamber of Commerce and the Queens Tourism Council.  The museum is a constituent of Kupferberg Center for the Arts and a cultural center of Queens College, CUNY.
About the Museum of the City of New York
The Museum of the City of New York celebrates and interprets the city, educating the public about its distinctive character, especially its heritage of diversity, opportunity and perpetual transformation. Founded in 1923 as a private, nonprofit corporation, the Museum connects the past, present and future of New York City. It serves the people of New York and visitors from around the world through exhibitions, school and public programs, publications and collections.
March 21, 2016