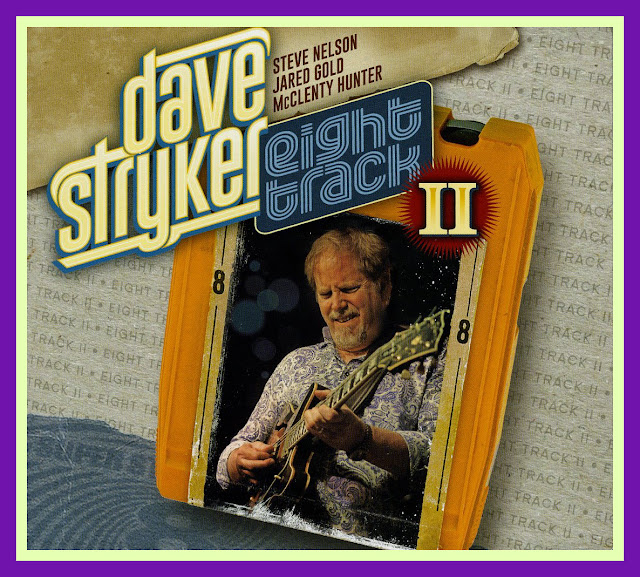 The editorial staff at JazzProfiles has always been a big fan of guitarist Dave Stryker. In many ways, we see him as the epitome of the working Jazz musician, one who is constantly reinventing himself to keep his music interesting.


Over the span of his career, he has keep this interest factor up through a high level of creativity expressed with different instrumentation in his working groups and by using different themes from which he selects new music to arrange and improvise on.


Lately, the instrumentation has consisted of a quartet made up of Dave’s guitar, either Stefon Harris’ or Steve Nelson’s vibes, Jared Gold’s Hammond B-3 organ and McClenty Hunter’s drums.


As to a theme, lately, Dave continues to pursue Jazz interpretations of music from the eight track cassette era from the mid-1960’s to the late 1970’s.


His latest CD releases today - September 2, 2016 - and we thought we’d help celebrate the occasion by posting to these pages the following excerpts from Bill Milkowski insert notes to Eight Track II.


The recording is available through CD Baby, Amazon and iTunes or by visiting Dave at his website: www.davestryker.com.


“A bevy of artists from Wes Montgomery and George Benson to Freddie Hubbard, Buddy Rich and Count Basie have had their way with Beatles tunes and other pop fare. But Stryker put his own personal spin on Eight Track and now continues that successful formula on Eight Track II, his 27th recording as a leader.


"A lot of people like hearing these tunes that they grew up with,”  says the guitarist, who remembers playing some of these 70s staples on the 8-track console in his '69 GMC van with shag carpeting back in his youthful days in Omaha, Nebraska. "It brings people in and they'll go with you when they hear a tune that they recognize. But the challenge, always, is to find that I can do my thing to, improvise and play as creatively and musically as I would on any jazz standard. And I enjoy the challenge." 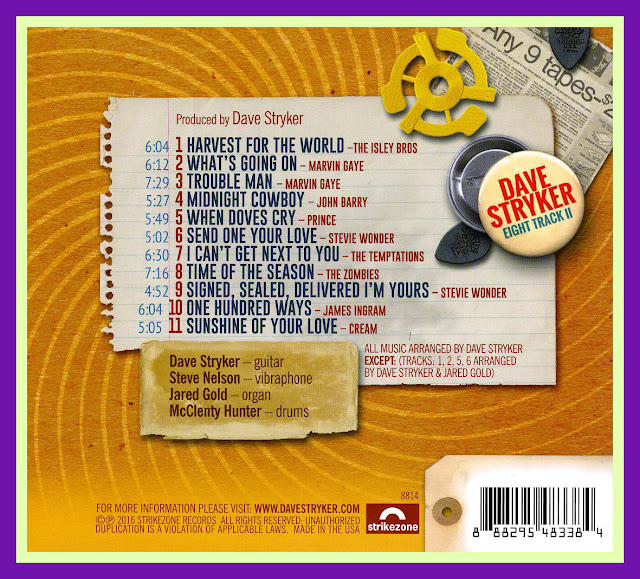 Four years after moving from Omaha to New York in 1980, Stryker began playing on the organ circuit with bluesy Hammond B-3 organ master Jack McDuff, who had seen such great guitarists as George Benson, Pat Martino, Grant Green and Billy Rogers pass through the ranks of his band. So dealing in that earthy B-3 format on Eight Track and Eight Track II is like returning home for Stryker, But 30 years later, the guitarist's six-string expression has deepened while his blues and bop chops remain razor sharp.


I'm very grateful that I had the opportunity to play with masters like McDuff and Stanley Turrentine, guys who played that style and just had it in their blood, There's nothing like being able to guys like that. Now I try to play my own way and I stretch things a little bit. It’s still in the pocket but I feel like I’m trying to have my own take on things with this new group."


Returning from Eight Track are Stryker's right-hand man Gold on B-3 and
the exciting young Hunter on drums. Special guest this time out is vibraphonist Nelson, a longtime member of Dave Holland's quintet and big band who has also played and recorded with such giants as Jackie McLean, Kenny Barron, Johnny Griffin, George Shearing and Mulgrew Miller. "Steve is a cat and a very soulful player," says Stryker. "I really like what he did on this album,"


The intrepid quartet kicks off Eight Track II with the Isley Brothers3 anti-war protest song "Harvest for the World," which they handle as a vibrant shuffle with some hip re-harmonizations. Stryker's warm-toned flow of notes is mirrored by Nelson's glistening vibes on the catchy head. The guitarist takes his time building an impressive solo, which is brimming with double-timed flurries and blues-soaked lines.


Their take on Marvin Gaye's anthemic What's Going On title track of his 1971 song cycle addressing drug abuse, poverty and the Vietnam War - themes that still resonate with relevancy today - opens with a delicate balladic intro featuring vibes and guitar in unison, As they fall into the familiar theme, rendered here in 6/8, Stryker 'sings' the melody through his axe before developing that motif through the course of his probing solo. Nelson explores in introspective fashion on his vibes solo and Gold pushes the envelope on his own dextrous solo as Stryker comps pianistically behind him. The band to a 4/4 for the last minute of the piece, giving the listener a little jolt


Another Gaye staple, 1972's Trouble Man, is given an earthy shuffle-swing treatment. Nelson channels his inner Bobby Hutcherson on his envelope-pushing solo here while Stryker remains firmly rooted in a blues 'n hard bop bag, summoning up some Wes-like octaves along the way.


A mellow rendition of John Barry's evocative Midnight Cowboy, the Grammy-winning instrumental theme from the 1989 movie of the same name, features nice octaves work and extrapolation by Stryker. Nelson's luminous solo is underscored by McClenty's supple brushwork and Gold's luxurious B-3 cushion.


Stretching the rules a bit, Stryker next leaps out of the 70s and into the early '80s for a killer uptempo swing version of Prince's 1984 hit, When Doves Cry. Fueled by McClenty's rapid-fire ride cymbal work and Gold's unerring walking Stryker's cooking here, while both Nelson and Gold bring some heat of their own with incendiary solos. Hunter adds an exhilarating drum solo to put an exclamation point on this burner. 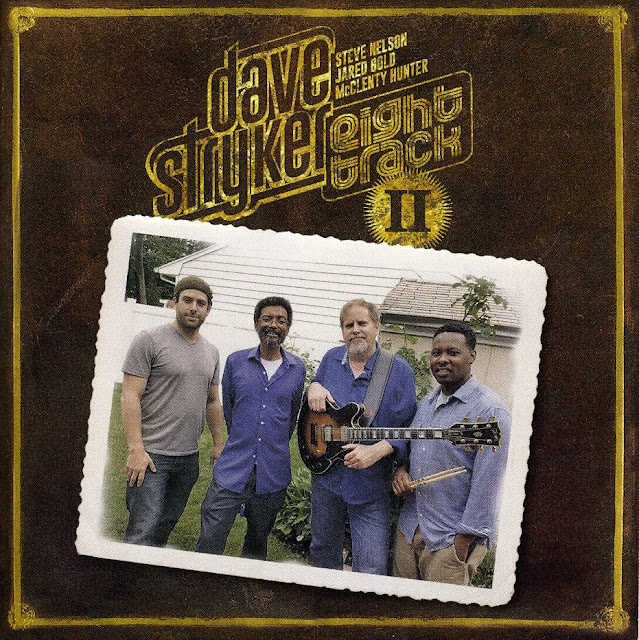 A gentle reading of Stevie Wonder's Send One Your Love showcases Stryker's lyrical side while the quartet digs into The Temptations' Can't Get Next to You with visceral intensity, spurred on by Hunter's muscular backbeat "That's what I love about McClenty," says Stryker. "He can swing but he's got a serious too, and he can slam!" Gold delivers the kind of solo here that harkens back to the golden days of the organ lounges. “I played with McDuff, I got to play with Jimmy Smith and Dr. Lonnie Smith, and they were all masters,” says Stryker,"but of the new generation, Jared is my man. His harmony is heavy. His lines are not the typical thing you hear from organ players. I think he's special,"


Their rendition of The Zombie's Time of the Season is handled as a cool shuffle swing number with the guitar-vibes combo and Gold's hip, syncopated basslines percolating underneath. Stryker lets it rip in his solo here and is followed by Gold and Nelson, who each turn in dazzling solos.The three exchange eights with Hunter at the tag in classic bop fashion.


A driving rendition of Stevie Wonder's Signed Seal Delivered features one of Stryker's most inspired solos on the record. From that dynamic number, they slide into the alluring James Ingram ballad One Hundred Ways, handled with relaxed soulfulness by the crew.


They close with a tough shuffle-swing rendition of Cream's Sunshine of Your Love that sounds like something Stryker might have played with McDuff up at Dude's Lounge in Harlem back in the day. Everyone gets a taste on this foot-stomping finale. "I have a long history with that song," says the guitarist, "I actually played it as a solo guitar piece in my 6th grade talent show!"


These nostalgic 70s anthems are deeply ingrained in Stryker's consciousness. And the earthy feel of the organ quartet sound is imbedded deep in his bones after 30 years of playing on the scene. He successfully, joyfully combined the two on Eight Track II.”


Bill Milkowski is a regular contributor to Down Beat and Jazziz magazines. He is also the author of JACO: The Extraordinary and Tragic Life of Jaco Pastorius and the co-author of Here and Now: The Autobiography of Pat Martino.


Here’s an audio-only version of Sunshine of Your Love the will give you a taste of what’s on offer in Dave’s Eight Track II.