The Sugar Hill Trio - "The Drive" 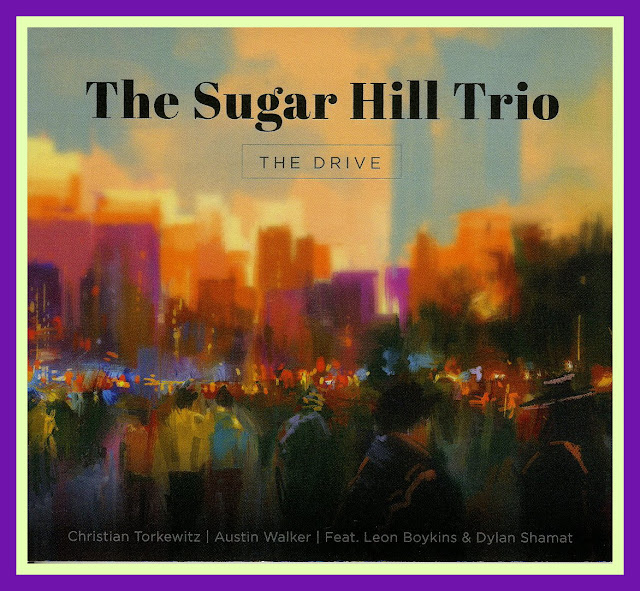 There are four elements that combine in such a way so as to make The Drive [Goschart 031547] commendable and these are the musicians who perform on it:
Christian Torkewitz: Tenor Saxophone and Flute, Austin Walker: Drums, Leon Boykins: Bass (tracks 1,2,3,4,5,6,11), Dylan Shamat: Bass (tracks 7,8,9,10)

A fifth element makes it especially enjoyable to my ears and that is the music itself.

This is because, unlike many of the self-produced CD that manage to find their way to the editorial office of JazzProfiles which are made up of exclusively new music, that is to say, original compositions, The Drive actually emphasizes seven Jazz Standards and tunes from the Great American Songbook among the eleven tracks on the recording.

For former Jazz musicians and enduring Jazz fans like me who have a knowledge of the idiom dating back over half a century, it’s wonderful to hear new players bring the tradition forward by superimposing their improvisations over familiar melodies.

Of course, it is costlier to produce a CD in this manner because there is the question of royalties that must be paid to gain licenses to perform copyrighted music.

But like Jung’s “collective unconscious,” Jazz is an evolving extension of what went before it so how does one discern these associations if there are no references to the Jazz tradition by musicians on the current Jazz scene?

On The Drive Chris, Austin, Leon and Dylan test their mettle as improvisors by offering well-played and interesting improvisations on Jazz classics that include
Minority by Gigi Gryce and Ask Me Now by Monk and on Harry Warren’s You’re My Everything and Jimmy van Heusen’s Like Someone in Love.

And they do it without a net, so to speak, as this is a pianoless trio that relies very heavily on the bassists Boykins and Shamat to provide harmony for Chris much the same way that Gerry Mulligan’s pianoless quartet relied on bassist Bill Crow to provide the harmony for Jeru and Chet Baker.

Jim Eigo of Jazz Promo Services is handling the public relations for the group and he sent along the following media release for the new recording which provides detailed information about the musicians and the music on The Drive.

'The Sugar Hill Trio" comprised of multi-instrumentalist Chris Torkewitz, drummer Austin Walker and bassists Leon Boykins and Dylan Shamat, is a modern day innovative/avant-garde jazz combo whose wide breadth of musical repertoire extends and expands popular music from a time once forgotten. The musicians are actively continuing to work as internationally recognized freelance musicians performing around the world basing themselves out of Hartem New York City. "The Drive" has been recorded in two very spontaneous sessions at the Samurai Hotel Studios in Astoria/Queens. Many of the tracks are first takes and capture the moment.

Chris Torkewitz (tenor sax, flute, composition) Firmly rooted in the traditions of Western music and home-based in Modern Jazz, Chris Torkewitz took up studies
in Cuba at the age of 18. Re-settling to NYC in 2007 and being a part of the scene enabled him to merge his prior influences and find influences from the contemporary NYC jazz scene, Afro-Cuban rhythm culture, and European music traditions.

In 2013, he established his NYC-based jazz orchestra and the chamber project “Vista” showcasing his large ensemble compositions. Torkewitz shared the stage and recorded with many renowned world-class artists and holds a Doctor of Musical Arts degree (DMA) in performance, composition and education from the Manhattan School of Music.

Austin Walker (drums) Austin Walker is a drummer and percussionist who hails from Massachusetts. His style of drumming captivates with an uncanny ability to be explosive while supportive at the same time. Austin is now a modem drummer currently based out of New York City. In the past ten years, Austin has distinguished himself as a musician who has shared the stage with artist such as: Chris Potter, Luis Bonilla, Shai Maestro, Joe Sanders, Matt Ciohesy, Kurt Bacher, Gilad Hekselman, John Raymond, Sullivan Fortner, Tony Malaby, and Dan Tepfer.

Leon Boykins (bass) Lam Boykins has developed a reputation for tastefully blending music tradition with innovation. With several studio projects as a sideman, and countless worldwide performances under his belt. As an in-demand sideman, Leon prides himself in interpreting the artistic vision of each artist lhat he makes music with.

Dylan Shamat (bass) Dylan Shamat is a bassist, composer and educator based in New York City. Dyman was born and raised in St. Paul, Minnesota where he began his musical studies on the violin at the age of 4. He moved to New York in 2005 where he studied at the Manhattan School of Music and The Juilliard School. In 2010, Dylan was selected to participate in the Jazz Aspen Snowmass Summer Academy to learn from jazz greats Christian McBride, Dianne Reeves, Russell Malone and Terence Blanchard. He can be found performing in New York with Lea Delaria, Allan Harris, Cyrille Aimee and countless others as well as in the off-Broadway production of ‘Sleep No More.’

The recording is available from:

As a point in passing with reference to the Jazz Tradition, I’m guessing that the group’s derives its name from the “Sugar Hill” section in New York City that’s bound on the north by West 155th Street, on the south by West 145th Street, on the east by Edgecome Avenue and on the west by Amsterdam Avenue and that once was the home of Jazz luminaries such as Duke Ellington, Cab Calloway and Thelonious Monk, among many other Stars of Jazz.

It would seem then that The Sugar Hill Trio is in good company.