Jay and Kai: When Two Trombones Are Better Than One “'You can't play all night in a club with just two trombones and rhythm!’ a friend told Kai Winding when he announced that he and J. J. Johnson were going to do just that.
He was wrong, but awfully right at the same time. The answer is that you can do it, but not with ‘just two trombones.’ You have to have the best—Kai Winding and J.J. Johnson.


Their ability as trombonists is only part of the story. The entire "book" for the group has also been written by them, and it is their imagination as arrangers which has carried off this tour de force even more than their extraordinary talent as soloists.


Jay and Kai have done it the musicianly way, with no gimmicks—just solid musicianship. Working without a guitar, which would have given them variety in the coloring of the solos as well as another voice in the ensembles, makes their job that much harder. But in order to get engagements in clubs, they had to confine the group to five men, and the added challenge has only spurred them to greater creative height.


Each has had a wealth of big band and small combo experience. During the hop era, Jay was in the rare position of establishing a school of trombone playing which consisted of himself alone; no one else was remotely in his class. Kai came up through the big band field, achieving prominence as a soloist with Stan Kenton in 1946. In recent years, both men have gigged extensively with small groups, and Kai still keeps his hand in as a studio sideman between the quintet's bookings.


The arranging of the book has been divided equally between them, and each man has contributed several fine originals. Their choice of repertoire is discriminating; they seem to have a knack of choosing half-forgotten but exceptional show tunes and songs which are fine vehicles for "class" singers. (Perhaps the lyric quality of their trombone playing is responsible for this taste.) Both play with a technical ease which is the envy of lesser slide men. Although they play quite unlike each other most of the time, there are many occasions on which it is impossible for even their closest followers to tell them apart.”
- George Avakian, insert notes to CD re-issue of Trombones for Two


The idea for this piece came from revisiting the J.J. Johnson and Kai Winding Columbia recording made at the 1956 Newport Jazz Festival [the LP is shared with the Dave Brubeck Quartet]. Along with bassist Bill Crow and drummer Rudy Collins, the two trombonists’ quintet featured Dick Katz on piano. Dick was to be the pianist with Jay and Kai’s group throughout its existence from 1954-56.


Listening to this recording reminded me of what an excellent pianist Dick Katz was, he died in 2009 at the age of 86, but it also brought back thoughts about Dick Katz the record producer [he founded Milestone Records with Orrin Keepnews], Dick Katz the Jazz educator [he taught at the New School and the Manhattan School of Music], but most especially about Dick Katz, the gifted Jazz author [Bill Kirchner tapped him to write The History of Jazz Piano essay in his The Oxford Companion to Jazz]. 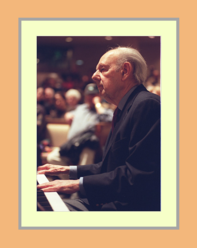 I never got to attend any of Dick’s Jazz courses, but I always learned so much about the music from his writings.


Sure enough, when I went digging around my collection of Jazz recordings, there was Dick writing his usual, clever and insightful insert notes to the 1960 reunion album by Jay and Kai’s quintet on Impulse! Records [The Great Kai & J.J.! IMPD-225]. 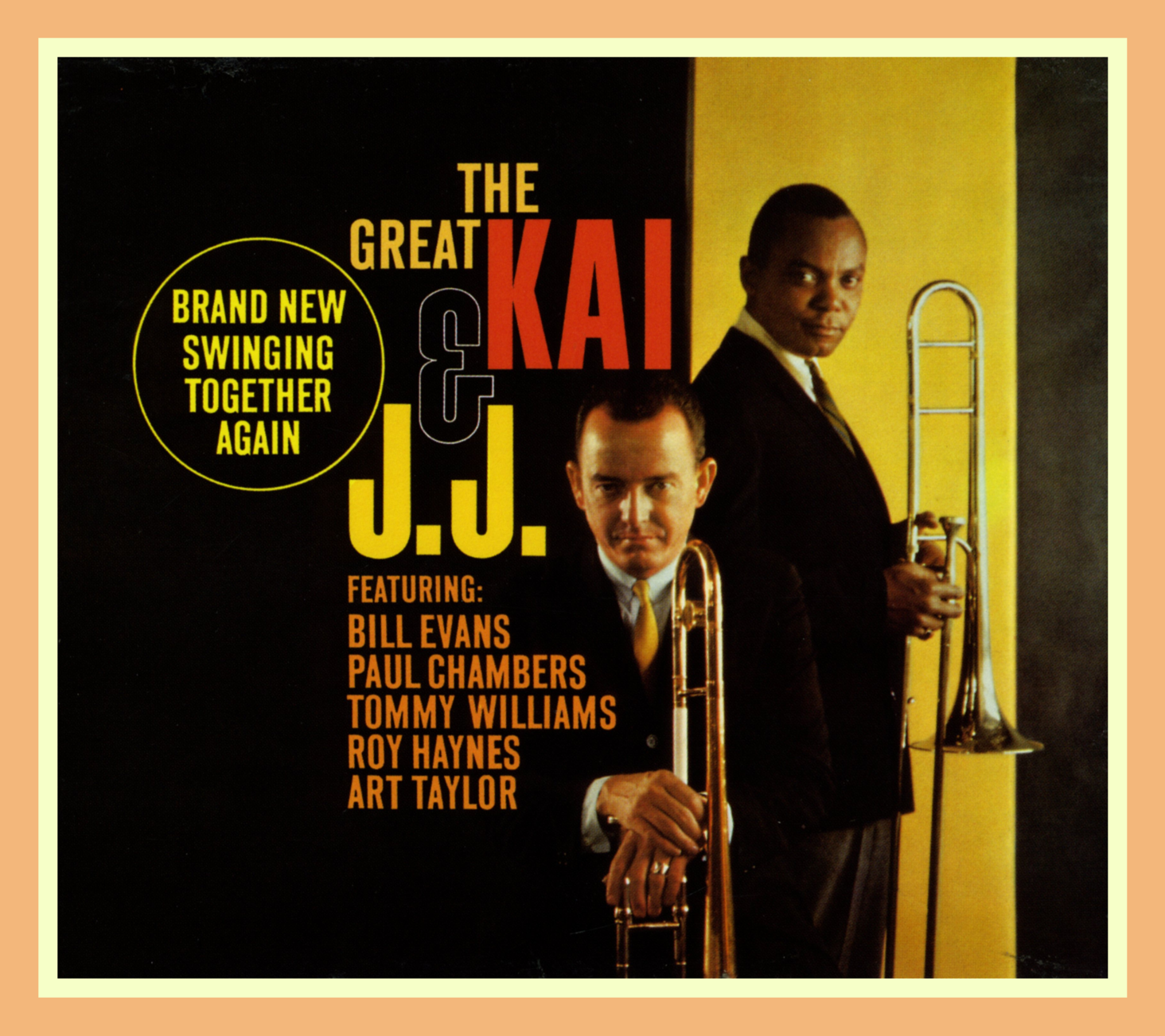 A sample Dick’s expository skills, flowing style of writing and considerable knowledge on the subject of Jazz and its makers can be found in the following excerpts from the  J.J. Johnson and Kai Winding Impulse! notes:


“‘I don't know anything about music, but I know what I like.’


This bon mot is usually attributed to the celebrated Common Man, and while the sophisticate might wince upon hearing such a bromide, an element of truth is present. The sentence often indicates that knowing how music is made does not necessarily assure one's enjoyment, or even enlightenment. The intellectual, armed with the tools of musical analysis, will not experience music any more intensely than someone not blessed with musical scholarship — if the conditions for being "moved," or emotionally stimulated, do not occur in the music. Indeed, knowing too much can actually interfere with hearing the music.


You see, music has to do with feelings, and the knowledge of what makes it tick should be a bonus that adds to or enhances the listener's understanding. It should never be a substitute for emotional involvement.


Now, the "conditions" referred to above are what concern us here. Good jazz does not come out of the air like magic. True, a genius sometimes creates this illusion, but in the main, it is the result of an artistic balance between the planned and the unplanned. Even the great improviser is very selective, and constantly edits himself.


Throughout the relatively short history of jazz, many of the great performances have been ensemble performances where the improvised solo was just a part of the whole. This tradition of group playing, as exemplified by Henderson, Basie, Ellington, Lunceford, John Kirby, Benny Goodman's small groups, the great mid western and southwestern bands, big and small (Kansas City, et. al.).  almost came to a rather abrupt halt with The Revolution. And that is exactly the effect Charlie Parker, Dizzy Gillespie and their colleagues (J. J. Johnson among them) had on jazz music. Their extreme improvising virtuosity seemed to take the focus off the need to play as a group. But herein lies the irony — the precision with which they played their complex tours de force was due in large measure to the extensive ensemble experience they gleaned as members of disciplined bands like Hines, Eckstine, etc.


It was their talented, and not-so-talented, followers who often missed the point. Musically stranded without the opportunity to get the type of experience their idols had (due to many factors, economic and otherwise), they resorted to all they knew how to do — wait their turn to play their solos. This type of waiting-in-line-to-play kind of jazz has nearly dominated the scene for many years. Although it has produced an abundance of first-rate jazzmen, many excellent performances, and has advanced some aspects of jazz, the lack of organization has often strained the poor listener to the point where he doesn't "know what he likes."


So, in 1954, when J.J. Johnson and Kai Winding formed their now celebrated partnership, one of their prime considerations was to help remedy this chaotic state of affairs. Both men, in addition to being the best modern jazz trombone stylists around, were fortunate enough to have had considerable big and small band experience. They astutely realized that a return to time-tested principles was in order. Variety, contrast, dynamics, structure (integrating the improvised solos with the written parts) — these elements and others which give a musical performance completeness — were accepted by Kai and J.J. as both a challenge and an obligation to the listener. 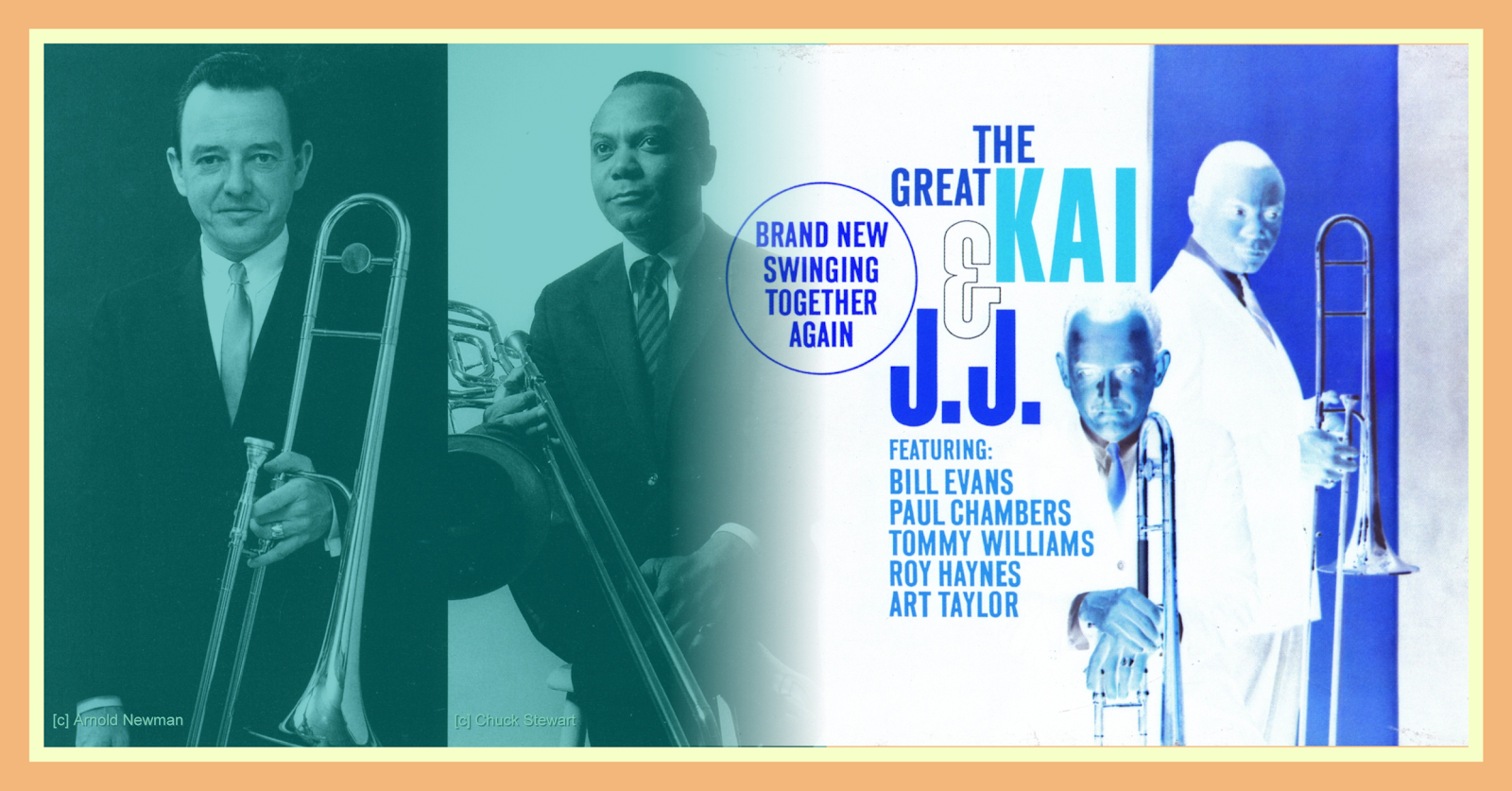 This awareness, combined with their individual composing and arranging talents, plus an uncanny affinity for each other's playing, made their success almost a certainty. That success is now a happy fact. From their Birdland debut in 1954 to their climactic performance at the 1956 Jazz Festival at Newport, they built up an enviable following. Also, they have created an impressive collection of impeccable performances on records. That they overcame the skeptical reaction to the idea of two trombones is now a near-legend. One only need listen to any of these performances to demonstrate once again the old adage — ‘It ain't what you do, but the way that...’


The respective accomplishments of J. J. and Kai have been lauded in print many times before. Their poll victories, festival and jazz-club successes are well known. Not so obvious, however, is the beneficial effect they have had on jazz presentation. Their approach to their audience, the variety of their library (a good balance between original compositions and imaginative arrangements of jazz standards and show tunes), together with their marvelous teamwork, helped to wake up both musicians and public alike to the fruits of organized presentation. With the jazz of the future, organization will be an artistic necessity; the future of jazz will be partially dependent on it, as is every mature art form.


Hearing this album, one could easily be led to believe that J. J. and Kai have been working together all along. The precision with which they perform is usually found only in groups that have worked together for a long time. Actually, they have played together very little in the last few years, both having been occupied with their respective groups — J.J. with his quintet, and Kai with his four-trombone and rhythm combination. However, it is quite evident from these performances that both have continued to grow musically and bring an even greater finesse and seasoning to their work. This is a welcome reunion.


What can't be verbalized are the feelings expressed in the music. That's where you, the listener, are on your own.”