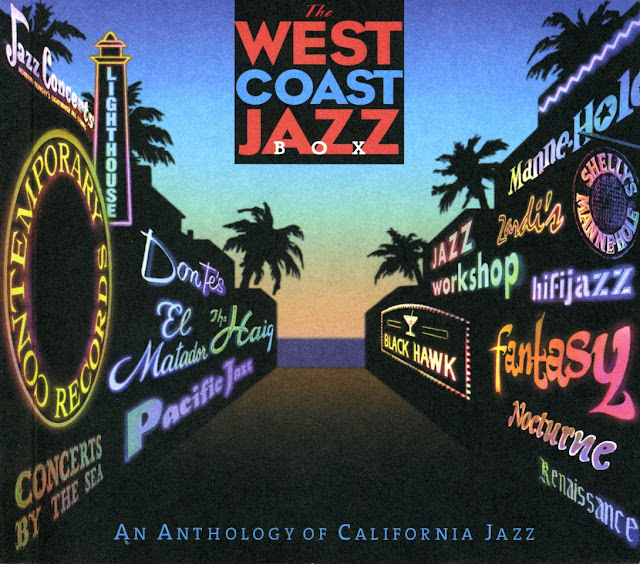 “There was something special about the West Coast jazz scene of the Fifties and early Sixties. Those of us privileged enough to have lived through that era — to have heard favorite musicians holding forth at the Lighthouse, the Haig, the Black Hawk, or Zardi's (or later, at places like the Jazz Workshop, the Renaissance, or Shelly's Manne-Hole) — tend to smile broadly whenever someone's comments or a snatch of music conjures up that scene.”
- Bob Gordon, author Jazz on the West Coast

Because I was “there” and had a professional involvement with it as a musician, I often get asked about what recordings to buy that feature the West Coast style of Jazz which existed mainly in California from 1945-1965.

My recommendation is pretty straightforward - West Coast Jazz Box: An Anthology of California Jazz - a 4 CD collection that was issued by Fantasy in 1998 [4CCD-4425-2].

The musical selections in the set are a comprehensive representation of all facets of the styles of West Coast Jazz that were played during this twenty year period and the following booklet annotations about the music by Bob Gordon, author of the definitive Jazz on the West Coast, and by the boxed set’s producers Ralph Kaffel and Eric Miller are unsurpassed in providing a brief synopsis of this “moment in time” in the history of Jazz. 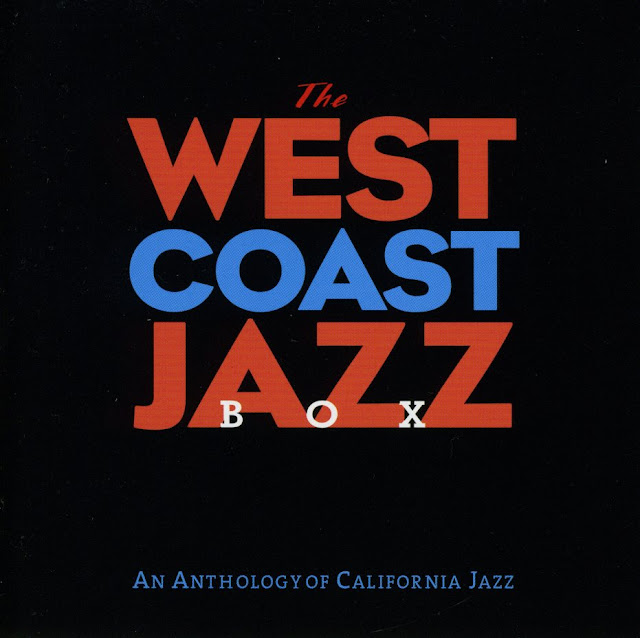 “I may as well own up to this at the beginning: there is no general agreement upon the definition of the term "West Coast Jazz." The phrase has been bandied around for over four decades now, but as with many a catch phrase, it seems to mean pretty much what a given speaker wants it to mean. Like the word "jazz" itself, most everybody has a vague idea of what the term encompasses, but when it gets down to particulars, the arguments begin. So if you've already glanced at the listings for this album and decided that a particular performance doesn't fit your idea of West Coast Jazz, not to worry: you'll probably enjoy it anyway, whether or not you believe it's truly West Coast Jazz.

My personal preference for such a definition has always been: "That music produced by jazz musicians residing at the time on the West Coast."This seems to me the only definition inclusive enough to include the entire scene, from Dexter and Warden's Central Avenue duels, to musicians like Dave Brubeck, Gerry Mulligan, and Shorty Rogers, to the experiments of Ornette Coleman.

As to the origins of the term, nobody — to my knowledge, anyway — has ever taken credit (or accepted blame) for coining the phrase. When it first came into general use, the vocal wars between the boppers and moldy figs were beginning to wind down, and it's possible the trade journals felt the need for a new cause celebre to boost circulations. This cynical view, however, fails to acknowledge that in the first half of the Fifties, at least, there did seem to be certain stylistic differences between much of the jazz being produced in California and much of the jazz emanating from the East Coast. (I've emphasized "much" in both cases because many musicians from both coasts stubbornly refused to fit into their assigned pigeonhole.)

Basically, the differences were these: many of the West Coast musicians took their inspiration from such "cool" influences (there's another one of those damned terms) as Lennie Tristano and the Miles Davis Birth of the Cool band, while the mainstream of jazz in New York City could easily be recognized as a direct descent of bebop. As long as one remembers that such generalizations are generalizations — that there was cool jazz being played in New York and fire-breathing bebop being performed in Hollywood — the distinction can be useful. In any case, by the end of the decade, such differences became ever less apparent.

The musicians, of course, were loath to be so pigeonholed. Shelly Manne can be heard on a "live" recording introducing the members of his working band—one of the hottest units on either coast at the time—as a "West Coast Group." Shelly then goes on (in a native New Yorker's accent that he was never quite able to shake) to list the hometowns of his musicians: Joe Gordon (Boston, Massachusetts), Richie Kamuca (Philadelphia, Pennsylvania), and Monty Budwig (Nyack, New York), gleefully saving Victor Feldman (London, England) for last. Rarely has a musician's disdain for such labels been as forcefully, if tactfully, expressed.
And yet, and yet...

There was something special about the West Coast jazz scene of the Fifties and early Sixties. Those of us privileged enough to have lived through that era—to have heard favorite musicians holding forth at the Lighthouse, the Haig, the Black Hawk, or Zardi's (or later, at places like the Jazz Workshop, the Renaissance, or Shelly's Manne-Hole)—tend to smile broadly whenever someone's comments or a snatch of music conjures up that scene. This set should bring back fond memories for those already familiar with West Coast jazz, and perhaps it will provide some feeling for the ambiance of the period for those to whom the term is just a phrase remembered from the jazz histories.” 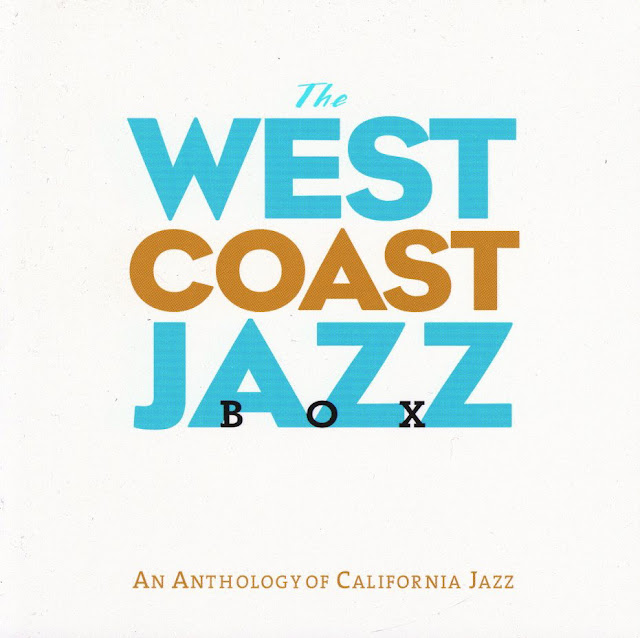 Ralph Kaffel 1998
I've wanted to assemble this compilation of West Coast jazz classics for many years now, but something always came up to dislodge it from its place on the year's release schedule.

The publication of Robert Gordon's Jazz West Coast (1986) and Ted Gioia's West Coast Jazz (1992) served as pointed reminders to quit procrastinating and get down to business. This year, we did.

Eric Miller and I finally decided that nothing would keep us from making this long rumored project a reality. Eric, Bob Gordon, and I — each with our own personal favorites — were responsible for selecting the contents. My own criteria were simple: to pick the tracks which not only had made a musical impact, but were solid sellers that enjoyed substantial radio play. For example, I still remember vividly the excited anticipation of initial releases by artists like the Chico Hamilton Quintet and Hampton Hawes, or the latest from the Lighthouse All-Stars, following their previews on KNOB-FM (the "Jazz KNOB" in Long Beach).

At this point I must confess to more than a little "partisanship" with respect to this music. My first job in the record business, circa 1956, was as a salesman for California Record Distributors in Los Angeles, a wholesale distributor owned, as it happened, by Contemporary Record's owner Lester Koenig. Richard Bock's Pacific Jazz Records was one of the distributor's most important labels. I always looked forward to attending the recording sessions at Contemporary's Studios (actually, the warehouse) on Melrose Place and at Pacific Jazz Studios on Third Street.

Koenig and Bock were very different personalities with unique approaches to recording and running their businesses, but I had the same great admiration for both of them and for the music they were producing.

Acquiring the Contemporary catalog in 1984, therefore — and keeping it in print, for the most part — was a major thrill for me on a personal level, as was the ability to work with Dick Bock on a few projects in the 1980’s, an association unfortunately brought to a halt by his untimely passing.

I'm sure that Lester and Dick would have enjoyed The West Coast Jazz Box, made possible to a large extent by their passion for the music.”

“Los Angeles had a vibrant jazz scene in the 1950s and '60s. I hung out a lot at Sam's Record Shop (the Birdland of jazz stores) at 5162 West Adams Boulevard, and Sleepy Stein did his KNOB-FM jazz show from just behind Sam's storefront windows.
Within 20 blocks of this store (and my house) were located some two dozen jazz clubs, where many of the artists in this collection played. The clubs included the It Club, the Zebra Lounge, the Parisian Room, and the Intermission Room.

Norman Granz presented his Jazz At The Philharmonic concerts twice a year in L.A. His artists included Ella, Oscar, Hawk, Pres, and Art Tatum, to name just a few. Sundays were my days for the Lighthouse, in Hermosa Beach, when I could borrow the car.

Beside Contemporary and Pacific Jazz, great jazz was produced and recorded by the fledgling Hifijazz label under the direction of David Axelrod; Nocturne Records, co-owned by musicians Harry Babasin and Roy Harte; the aforementioned Normans, Granz and Gene; and the Tampa, Andex, and Mode labels.

Some 400 miles to the north, jazz was just as active in San Francisco, with its pioneering Fantasy Records — whose roster included Dave Brubeck, Gerry Mulligan, Cal Tjader, and Vince Guaraldi — as well as live jazz at the Black Hawk, the El Matador, the Jazz Workshop, and many more.

All things considered, I appreciate those years more and more with the passage of time, and see them as the "52nd Street days" of West Coast Jazz.”