People Time - One Last Time - with Getz and Barron 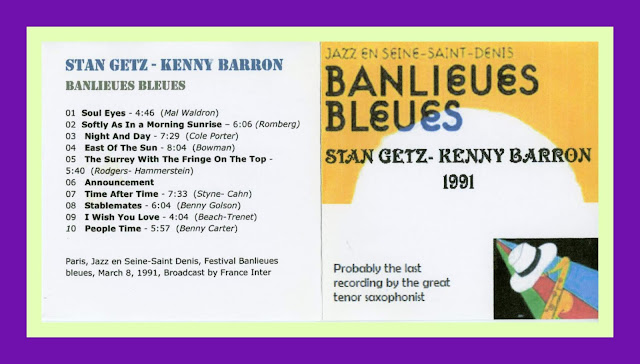 With all the attention that the 2 CD and the 7 CD People Time Stan Getz - Kenny Barron recordings from their March 3rd-6th, 1991 performances at the Cafe Montmartre in Copenhagen have drawn, understandably so, as Stan Getz’s final recordings before his death on June 6, 1991, often overlooked is his appearance 2 days later on March 8, 1991 at the Banlieues Bleues Festival, Jazz en Seine-Saint Denis, Paris, France.

By the end of the Cafe Montmartre engagement, its promoter Billy Hoogstraten saw how thoroughly the effort had drained Stan and he regretted asking him to play the 4th night at the club, especially since the first three nights had provided more than enough material for a CD [two initially, and then the entire three nights were later released on 7 CDs].

Stan had actually asked that the 4th night be cancelled because he was feeling so poorly, but Hoogstraten “convinced him that the Copenhagen audience had a particularly deep affection for him so Getz consented to an abbreviated performance on March 6th.” [Donald Maggin, Stan Getz: A Life in Jazz].

No commercial CD of the Getz and Barron appearance at the March 8th Paris concert was ever released, primarily because Stan was not pleased with his playing.

This is underscored by the lack of Getz’s powerful sound and long phrases, presumably due to stress, and by the fact that on the ten songs and tunes that were performed, Kenny Barron plays long solos [and often plays the tune out] ostensibly to allow Stan time to recover after he performs.

Although there is no commercial recording from the Banlieues Bleues Festival, Jazz en Seine-Saint Denis, Paris, France, March 8, 1991, the concert was broadcast on radio by France Inter.

This audio-only file of People Time which Stan announces to the crowd is the last tune that was played at the Banlieues Bleues Festival.

It is undoubtedly Stan Getz’s last public performance before his death in June 1991.