Rahsaan Roland Kirk - "Spring Will Be A Little Late This Year" 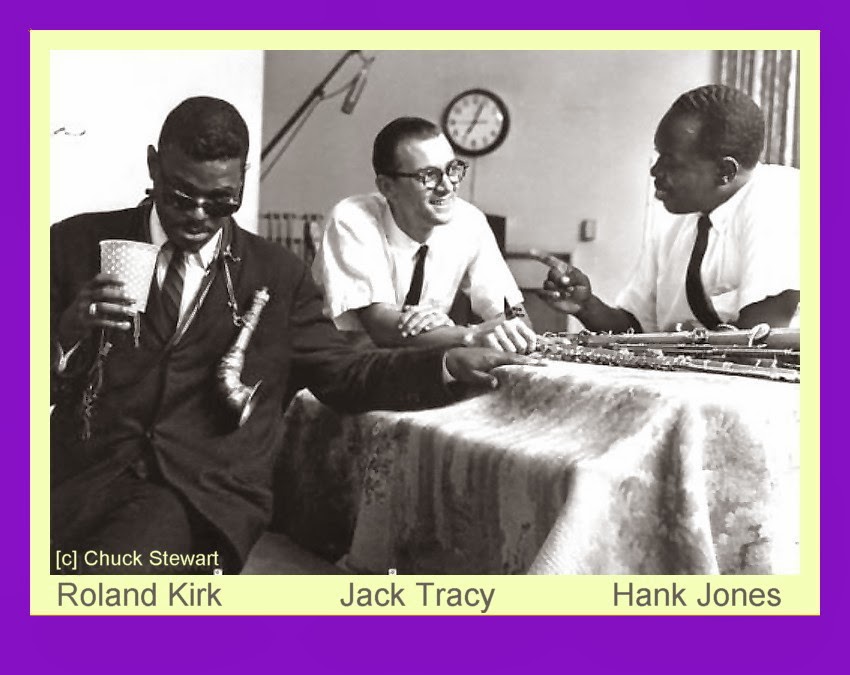 Certainly the most unusual recording artist I ever encountered was Roland Kirk, who later added “Rahsaan” to his name. Shortly after I joined Argo, Ramsey Lewis told me he had recently heard a remarkable player in Louisville and had told him if he was ever in Chicago to be sure to look me up.

It was perhaps a month later that the receptionist rang me and said there was a man named Roland Kirk in the lobby to see me. I went there and was met by an extraordinary sight: there stood a man in dark glasses, raggedly dressed and carrying a white cane. Beside him was an old golf bag with two wheels attached that allowed it to be pulled. In it were some strange horns that looked like reed instruments. Over his shoulder in a separate cloth bag was a tenor sax. He was alone.

I greeted him, brought him into the office, and he produced an LP he had recorded some time previous for a small label in the Midwest. I played it and was immediately taken by his extraordinary ability to play several instruments at the same time and with great jazz feel. Kirk told me that he and his rhythm section had driven to Chicago to look for a gig and to take a chance that I would record him. I would and did. We got a contract signed, a recording date was set, and the resulting album was issued as “Introducing Roland Kirk”.

My next album with him would be for Mercury. Shortly after “Introducing” was issued I was rehired by them to direct their jazz program, and with agreement from Argo, I was able to take Roland with me.

Our first Mercury album, done in New York, was titled “We Free Kings,” and became the album that really brought Kirk to the attention of disc jockeys, jazz fans and musicians. It was his growling, moaning, utterly unique flute playing on one track that created all the attention.

After the first take on a yet-unnamed blues, a friend of mine, Phil Moore, the noted vocal coach, drew Roland aside before we did take 2 and quietly suggested to him that he further personalize his performance by thinking of it as a story and giving it continuity. What resulted was an extraordinary and ground-breaking solo that culminated in Kirk growling an impassioned “You did it, you did it,” thereby creating the tune’s title and making Roland suddenly well-known.

Kirk’s refusal to let blindness keep him from trying almost anything that appealed to him made for some interesting situations. My favorite was the time I picked him up at his motel to take him to a recording date. He got into my car, but before I could turn the key to get started he asked, “Can I drive?” I just looked at him as if he was insane. “How the hell can you drive?” I asked.

I told him no.

A recent re-reading of this anecdote by our late, friend Jack Tracy, the Jazz record producer, writer and editor, brought us back to 10 CD boxed set of Rahsaan: The Complete Mercury Recordings of Roland Kirk [Mercury 846 630-2], which, in turn, led us to Gary Giddins’ review of the boxed set in his essay, Rahsaan Roland Kirk (One Man Band), Visions of Jazz: The First Century [New York: Oxford University Press, 1998, pp. 431-436] from which the following excerpts are drawn.

“Roland Kirk could have been renown had he done nothing else but play tenor saxophone….”

“No one who experienced him in performance can forget the sight: a stocky blind man swaying precariously back and forth on the lip of a bandstand, dressed in a yellow jump suit, his face implacable behind black wraparounds, blowing dissonant counterpoint on three saxophones of varying lengths, while other instruments, some of his own invention, dangled from his shoulders, neck, ears, and, on occasion, his nose. Talk about one-man bands. ….”

Kirk's persona, musical and otherwise, came into focus during four highly creative years, 1961-65, when he was signed to Mercury Records. The story is traceable on a ten-CD cube, Rahsaan: The Complete Mercury Recordings of Roland Kirk, complete with a sorry denouement in which his flair for showmanship encourages the label to lead him down the garden path of commercial excess. In 1961, Kirk was a twenty-five-year-old phenomenon who appeared to have too much fun playing at a time when solemnity was big.

“Born in 1936 in Ohio, Kirk was fundamentally a bebopper. Educated at the Ohio State School for the Blind, he was playing professionally at fifteen. Five years later, he made his first recording for King, a characteristic brew of blues and ballads on tenor sax only. Albums for Argo (with Ira Sullivan) and Prestige (with Jack McDuff) followed and, incidentally, suggest some confusion about the early attempts to pigeonhole him: bluesman, modernist, funkmeister? By now, Kirk had his basic arsenal. In addition to tenor, he played an obsolete cousin to the soprano sax that he called a manzello, a straightened alto with modified keys that he called a stritch, a siren, a whistle, and, a conventional flute. He found the manzello and stritch in the basement of an old instrument store and taught himself to finger two saxophones while using the third as a drone. In this way, he could play a variety of reed-section voicings and accompany his own solos with stop-time chords. …”

A particularly worthy find among the previously unissued material in the Mercury cube is a ridiculously greased  and tortuous trip through Spring Will Be A Little Late This Year.  Maybe it was too much for the label back then.”

Here’s a video montage featuring many of Rahsaan’s LP and CD covers with the very same Spring Will Be A Little Late This Year as the audio track.  “Too much” in the complementary sense of the phrase comes to mind when I listen to Rahsaan’s performance on this track.

See what you think.

[Joining Rahsaan are Hank Jones on piano, Art Davis on bass and Charlie Persip on drums.]