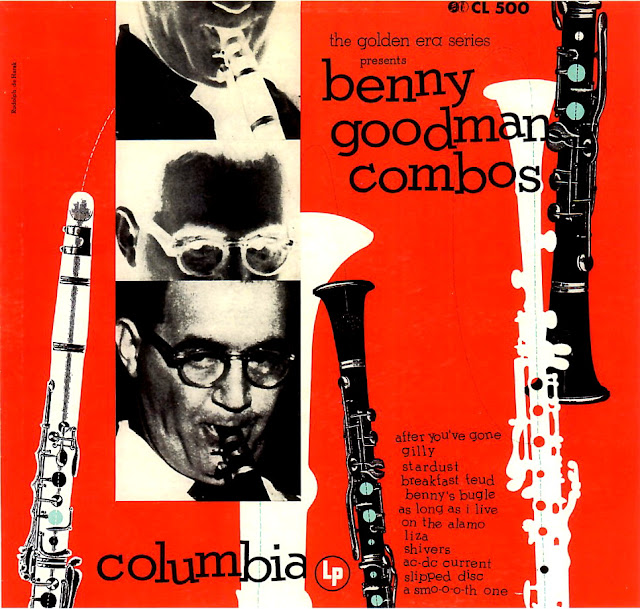 “Benny Goodman recorded prolifically throughout the great part of his more than six-decade career. The list of musicians with whom Goodman collaborated, and the quality of the music they made, are among the marvels of 20th-century music; they include Louis Armstrong, Bela Bartok, Fats Waller, Benny Carter, Fred Astaire, Bix Beiderbecke, Ethel Waters, Pee Wee Russell, Leonard Bernstein, Lester Young, Igor Stravinsky, Billie Holiday, and Arturo Toscanini.
What makes this list even more imposing is that Benny was not just a sideman playing in the background, but a featured artist whose artistic identity was broad enough to encompass all those diverse styles. When you add the musicians who were members of Goodman's bands, the magnitude of his accomplishment comes into focus. He was an American musician, exemplifying an amalgam of virtues that could only have happened on these shores.”
- Loren Schoenberg, musician, bandleader and Jazz educator

Benny Goodman’s combos formed my introduction to small group Jazz beginning with his trio with Teddy Wilson on piano and Gene Krupa on drums and later his quartet when vibraphonist Lionel Hampton joined Benny, Teddy and Gene.

And there the matter stood until I stumbled across a copy of Benny Goodman Combos [Columbia Records CL 500].

Issued in 1955 as one of Columbia’s “Golden Era Series” the twelve tracks on this recording gave me a context for understanding the scope and significance of more of Benny’s small groups, and, when taken in combination with the those on the Capitol/Mosaic set, he sure had a lot of them.

The Columbia LP introduced me to Benny’s quintets, sextets and septets and also provided me with some of my earliest listening experiences to the playing of Jazz luminaries such as Count Basie, Red Norvo, Charlie Christian, Cootie Williams, Georgie Auld and Jo Jones.

All of which goes to reinforce the point made in Loren Schoenberg’s introductory quotation - “The list of musicians with whom Goodman collaborated, and the quality of the music they made, are among the marvels of 20th-century music….”

Here are the original liner notes to Benny Goodman Combos [Columbia Records CL 500] which offered so much knowledge to a young Jazz fan 60 years ago. 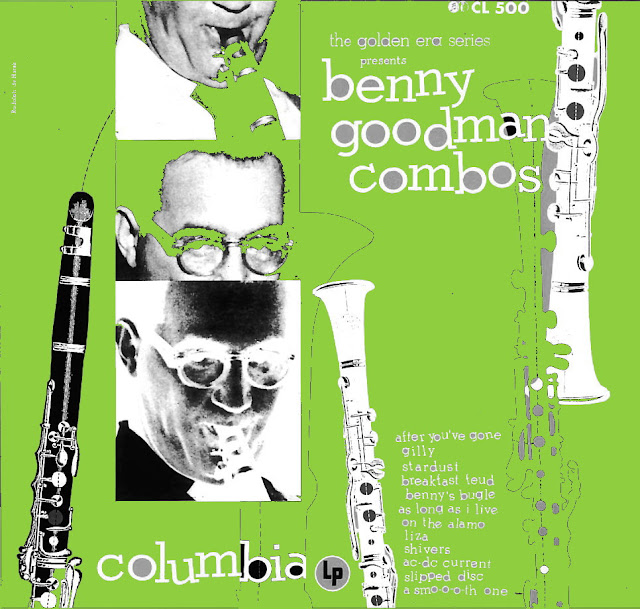 “Among the most enlightened musical groups of the last fifteen years have been the small combos led by Benny Goodman. Through innumerable changes in personnel the musical thought has remained about as constant as anything in popular music, and the musical attainment has continued on an astonishingly high level.

Goodman's spectacular success inevitably cued the public performances of other bands-within-a-band, but in almost every comparable group there was a delicately seedy atmosphere of the derivative, a feeling of "Hah! Goodman does it; so can-we." The fact was that they couldn't: only Goodman and his fluctuating crews of talented musicians were able to transmit high voltage chamber jazz effectively, and the selections in this group offer vivid testimony to the excitement of the greatest days of the swing era.

Any musical or philosophical dissection of the music of the Benny Goodman groups comes up against a very nasty problem — there is no adequate way to explain the electric qualities of music in performance, particularly when the music is of the highly informal and impromptu character in which these groups specialized. Giving undue weight to their development, one might say that they evolved from a search for new timbres and expressions within the framework of swing music.

Actually, they were the result of some blithely inspired talents getting together and having a whale of a good time. When the small combos came along in the late Thirties, Benny Goodman had already developed and polished to an unequalled glow one of the finest orchestras that ever drove dancers and listeners to a perspiring frenzy. After such plush pioneers as Paul Whiteman and George Olson brought syncopation out of the back rooms and made it more or less respectable, popular music was purveyed (on a large scale) primarily by orchestras of the hotel variety, where originality sickened and died with immodest haste. 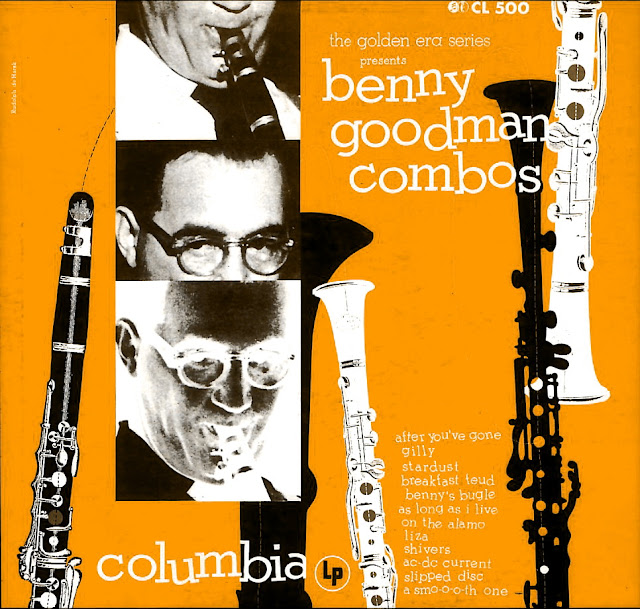 Then along came Goodman, and with him the Dorseys, Glenn Miller, Glen Gray, Artie Shaw and others, to effectively dispense with the ricky-tick approach. A new drive entered commercial popular music, together with a new freedom. Swing allowed soloists a fine, freewheeling latitude within the well-defined limits of the arrangements sketched out by such inventive spirits as Fletcher Henderson. And all this richly satisfied the younger set, a depression-reared generation who heartily welcomed the blazing and affirmative sound of swing music.

But a practitioner such as Benny Goodman, who has constantly enlarged his horizons and experimented with all forms of music, could not be entirely content with such a set-up. Despite the unparalleled freedom allowed soloists in a swing band, the very nature of the orchestra made it a little top-heavy, and ruled out the more delicate and more intimate effects. Out of this dissatisfaction came the Trio, at first an intramural entertainment and later one the public clasped to its bosom with eager abandon. Then the Quartet followed, enlarging the tonal range and affording more complex metrical subtleties, and finally the Quintet, Sextet and Septet which offered a contradictory blend of musical anarchy and discipline that produced the memorable music in this collection. It is doubtful that this development was a conscious affair: after all, Goodman was leading a commercial band, a supremely successful one, and was not likely to tamper unduly with its organization. These groups were primarily a musicians' divertissement that fortunately happened to appeal to the public.

And the public, which has turned its back on new musical forms with appalling regularity and a sort of dogged rigidity, asked for more and, happily, got it, in performance and on records. Yet even here, experimentation continued. Within this collection, in addition to the constant variations in personnel, there is a continuing variation in instrumentation that changes the mood and approach with refreshing results. In fact, the personnel remains the same for only two pairs of numbers. Yet there is a truly marvelous similarity of thought and execution and a pleasingly lofty standard throughout. As an example of small-unit work in the peak years of the swing era, there can scarcely be a better example than this collection by Benny Goodman and his little band of not-too-serious thinkers.”