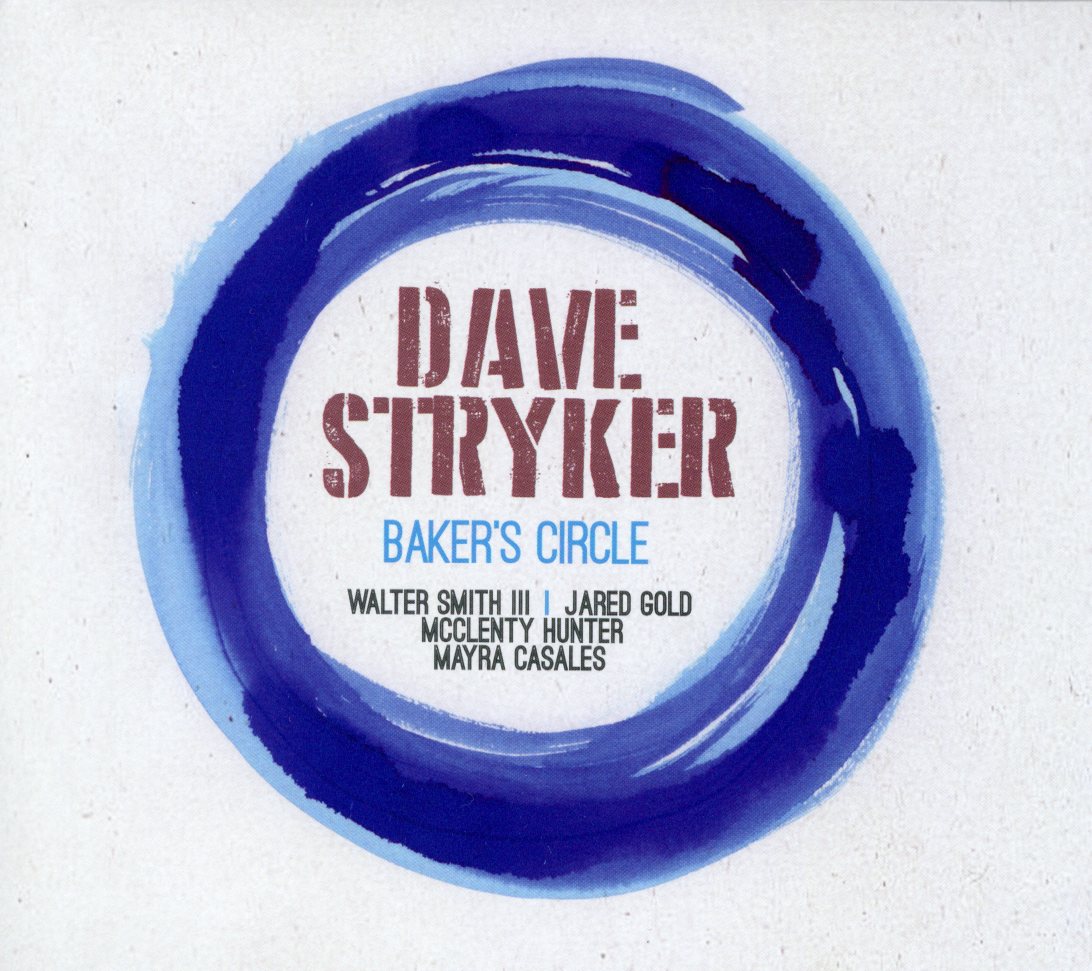 “RAY BROWN once defined a bassist's greatest assets as "good time, good intonation, and a big sound." While agreeing that this is a solid, workable definition, Bill Crow would add another factor.

"If you have those qualities," he explained, "and don't find out how to relate them to the musicians you're playing with, you'll still not be contributing much to the group. That may seem like a simple-minded statement of something everyone should know, but it's surprising how often poor contact between musicians is the principal difficulty in playing well together.

Bill Crow made those comments in a 1963 Downbeat interview and guitarist, composer and bandleader Dave Stryker has taken the caveats contained in them to heart by always putting together bands that work well as a unit because the individual members listen to one another and play as a group.

Dave Stryker has been around the music business for a long time and it shows in many aspects of his latest recording [if truth be told - in all his recordings] - from the other musicians associated with the project, to the song or tune selection, arrangement and track placement.

On Dave Stryker Baker’s Circle [Strikezone 8821], he’s given the music and the way it is performed on it a lot of thought which is not only drawn from his professionalism but also from his experience.

Dave does what Dave does best - he’s a straight ahead groove merchant: he just plants his feet and brings it, one compelling rhythmic chorus after another. He rides the rhythm section the way a master surfer rides the wave; always in the curl allowing the tidal current to propel him forward.

Nothing in Dave’s music is forced or strained and before you know it, it engulfs you in what Duke Ellington referred to as - “The Feeling of Jazz” - a feeling of elation and well-being complimented by warm emotions and generous helpings of finger-popings and foot tappings.

Helping to generate The grooves on Dave Stryker Baker’s Circle are some old friends - Jared Gold on organ and McClenty Hunter on drums. They are joined by two new associates - Walter Smith III on tenor saxophone and percussionist Mayra Casales who infuses Latin Jazz rhythms on three tracks.

Jared plays a pivotal role in the music as his comping adds rhythmic riffs but he can also join Dave and Walter as a third “voice” in enhancing both the melody and the harmony. Jared also provides some funky bass lines that add grease to McClenty’s engine room as his drums propel the music forward.

Dave puts all of these musical elements to good use in developing fresh takes on standards such as Cole Porter’s Everything I Love, Leon Russell’s Superstar and Marvin Gaye’s Inner City Blues, as well as, the four originals he brought to the date one of which - Baker’s Circle - also serves as the name for the recording.

Trouble [No. 2] is the last of the ten tracks and it could be said of it that it was placed so to end the party - because that’s what this record is - a party, a celebration, a bash. It also features a magnificent introduction to the tenor sax playing of Walter Smith III who channels some of Stanley Turrentine along with Joe Lovano and a hint of Tina Brooks while adding a big dash of his own voice to what has to be the most refreshing tenor saxophone sound heard on a Jazz recording in recent memory.

All of this made possible by Dave Stryker’s musicianship and experience which he brings to bear to create a recording that has a play through quality about it: the ten tracks just flow nicely one-to-the-other, stopping here for a little chop-busting, there for a new take on a standard, and everywhere for surprises. And when it's over, you can’t wait to listen to the whole thing again.

Above all, this group jells as a band that plays TOGETHER and the proof of it is everywhere apparent in Dave Stryker Baker’s Circle.

Jim Eigo of Promotional Jazz Services is handling the PR for the CD and he sent along the following media release for the CD which is due out on March 5, 2021. If you want the music sooner it’s available now via this link to bandcamp.

“After last year's successful big band outing, Blue Soul, guitarist Dave Stryker is back with his hard-driving, deep-grooving B3 organ group on his new recording—Baker's Circle. With the addition of cutting-edge tenor player Walter Smith III, Baker's Circle features Stryker's originals as well as a couple Eight Track gems and a tip of the hat to his former boss Stanley Turrentine. Along with Smith III, this fresh recording features Dave's working band of Jared Gold on organ and McClenty Hunter on drums and adds Cuban percussionist Mayra Casales to three tracks as well.

Baker's Circle starts with three Stryker originals. The hard-hitting "Tough" leads off with exciting sobs by the whole band. Casales’ congas join in on the latin groove of "El Camino" followed by the bluesy 7/4 of "Dreamsong." Cole Porter's "Everything I Love" is a medium swinger after which Gold's burning "Rush Hour" shows why Walter Smith III is considered one of the best of his generation. And Dave adds his Eight Track fingerprint to Leon Russell's "Superstar" and Marvin Gaye's "Inner City Blues."

Says Stryker: "Composer and educator David Baker was in my corner from the time I met him at a jazz camp when I was 17 till he hired me to take over as guitar professor at Indiana University a few years ago. I used to see him standing outside the Music School on a circular drive waiting for his wife Lida to pick him up. I named the song ‘Baker's Circle' in his memory."

Baker's Circle closes with "Trouble (No. 2)," a grooving shuffle originally recorded by Stryker's former boss, the great Stanley Turrentine. This caps a diverse program that showcases Stryker at his best — modern playing with the groove and soul that comes from years of experience.” 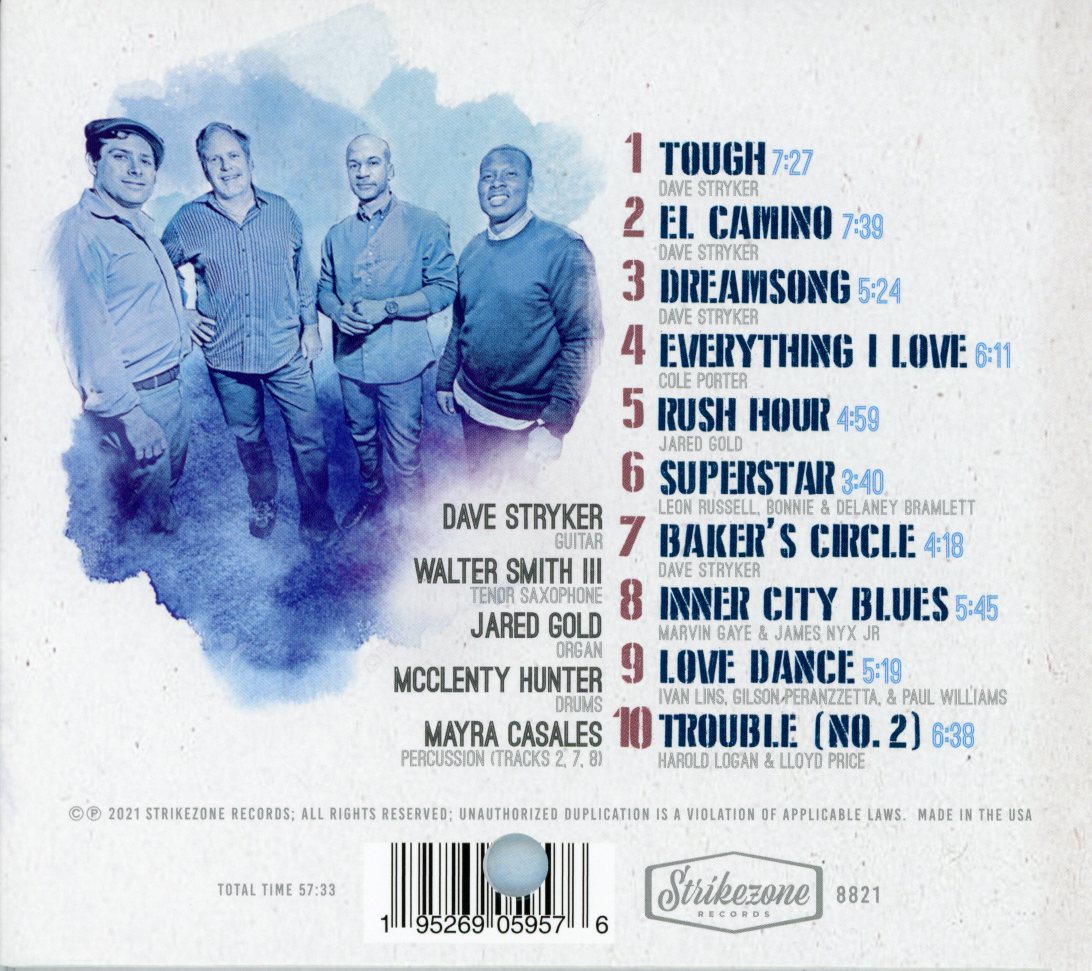