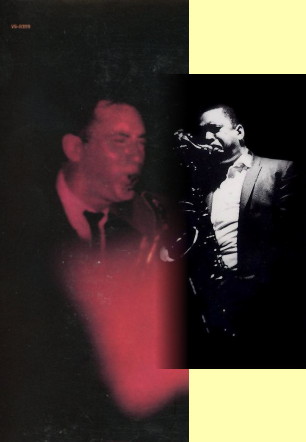 I’m always curious about the reactions of Jazz musicians to one another’s playing and found the following fascinating assessment of John Coltrane by Lee Konitz in Andy Hamilton’s Lee Konitz: Conversations on the Improvisor’s Art [2007].

Coltrane (1926-67) was stylistically opposed to Konitz in almost every way, and his influence on saxophonists has resulted in some of the empty virtuosity that Konitz disdains, even if Coltrane himself was not guilty of that kind of playing. But still Konitz shows an abiding interest in what the saxophonist was attempting.

Lee Konitz “Coltrane changed the direction of the music, as Bird did, and Ornette —  though he was more adventurous than Bird, and willing to change his approach till the end. He also, like Miles, and all great band leaders, chose the right players to join him. He went through the traditional music pretty thoroughly, then went into modal tonalities, and ate that up. My goodness, he was really sensational with Elvin, McCoy, and Garrison. He was always developing some new kind of vocabulary. I'm thinking of his modal playing, how chromatic that became, before Ascension — I don't really know that later period that well. Other people — and I've done this too — used to accuse him of practicing on the bandstand. He used to take a phrase and just throw it around in all directions — a form of composing.

I had a problem with that music — so much of the same high-intensity dynamic. If the level of intensity doesn't change, the music can become monotonous — even though it was necessary for John's spiritual release. It's evangelical, if you will — for many, he was the Messiah!

Do you think Coltrane had the compositional approach you described Charlie Parker as having?

“I think it was very worked out, basically. Certainly there was a large, readily available vocabulary, but a great feeling to improvise with the material at hand. He was an inspiration to many young players, for good and not so good.

I didn't really know him. Just to say hello. As I've mentioned, I wasn't hanging out a lot and I didn't get to meet a lot of guys and know them personally, regrettably. The best time for hanging out is on the road; and even then I didn't really party much.”

You've said harsh things about the influence of John Coltrane in terms of learning patterns, to create a high level of excitement at rapid tempos.

“Well, it's against my temperament to do it. And if I hear it done very well like when Coltrane was really on, it's very special, and I can enjoy that very much. But to hear other people do it in that style, or play Charlie Parker's style, I don't enjoy that much. Where is the real person? Still, I heard that after someone accused him of playing like Bird, Gene Quill held out his horn and said, "Here, you play like Bird!"

Recently I heard Branford Marsalis's group, with Joey Calderazzo, Eric Revis, and Jeff "Tain" Watts, pay tribute to Coltrane by playing their version of A Love Supreme. I think they do a great job of paying homage to John and his group.

Coltrane influenced a lot of players. He changed Art Pepper in midcareer.

“That was tragic, that influence, I think. I was just listening to a set of five albums of Art Pepper's, and one I made with him was the fifth in the package. Art was not in top form. I was feeling good, but obviously there was trouble there. On the record he made with Warne Marsh years earlier, he played beautifully. Warne really got to him, like he got to me. I never heard the records he made with Miles's rhythm section; they must have been more straight-ahead. I thought his comeback was a disappointment, from the expressionistic stuff I heard. I remember sitting in the Vanguard with Bob Mover—a saxophonist who played with Chet Baker a lot—and we just looked at each other in disbelief, at how ineffective Art was playing with Elvin Jones.

He was getting a lot of attention at that point.

He was a charismatic figure, as well as being a fine saxophone player early on. I appreciated that he tried to make a change. It's very important in the development of a player to take some chances like that. But you've got to make the change definitive. He only went part of the way; his harmonic ability was limited.

Bud Shank heard Phil Woods, and started to blow "hot." I think they were tired of being part of the cool school—they graduated maybe! I’ve tried to play hot when it was time to play hot. But I think maybe they sacrificed some quality along the way.

You have played [Coltrane’s] "Giant Steps."

“By now, people are more used to it, but at that time it was a very difficult etude. I actually played a version of that with my nine-piece band on Yes, Yes Nonet. Ronnie Cuber, the baritone player, had a solo, and he just flew through the changes. Then it was my turn and I stumbled through them. So I thought about it at home a little bit, and came back the next day and did another take. And I managed to get through. I just don't enjoy running changes that much.”

Why is it difficult?

“Because each change is two beats long, and the chords are going by really fast. It's an unusual sequence of chords, two beats per chord, in the first eight bars, in a major-dominant sequence moving a major 3rd—as opposed to the usual II-V-I sequence [“two, five, one" chord progression]. I played it in 3/4 time once and just that extra beat helped a lot.”

You have tried to play modal pieces, like "Candlelight Shadows" with Harold Danko. How would you approach those?

“Well, basically trying to express the tonality to begin with, to establish that as clearly as possible. Then, I think, the challenge is to play chromatically on top of that basic tonality — not losing the tonic somehow, returning enough to establish it. So it starts modally, and can develop intervallically and return eventually to resolve to the basic mode.”

Are you imposing chord changes over the modal system? It's said that Cannonball Adderley played Il-V-I's over the modes of Kind of Blue, and many jazz players seem to have played modally in this "impure" way.

“Modal playing is a very challenging premise. An opportunity to really get into a groove, and stay there, without the underlying melody and harmonies

of a conventional tune guiding you. I’m not a "groove" player — obviously! — and have accepted the restrictions of standard tunes for my way. But hearing Trane and a few others groove is a special experience. He and McCoy really stretched out chromatically. I don't know about "impure"— maybe for a church service!”