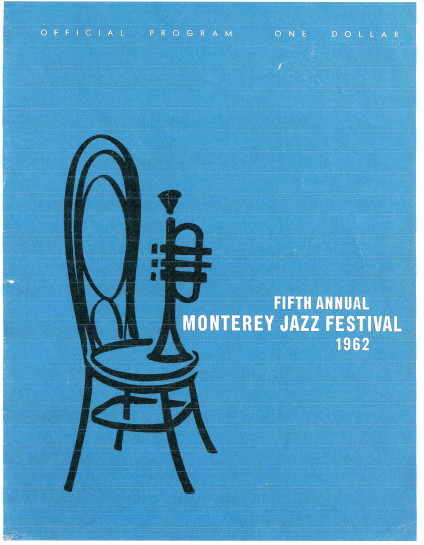 “Why was Pops’ performance in Dave and Iola Brubeck’s The Real Ambassadors such a moving and meaningful experience for him? Does this project have a special significance in Pops’ life beyond the music itself?”

“I think it does.  First, there was the challenge of learning an entire score of new material, something he really had never done before.  Even on Verve albums with Ella such as “Porgy and Bess,” I’m sure he was at least familiar with some of those great songs.  But the Brubeck’s wrote all these new songs with Louis in mind and Louis rose to the challenge by nailing it.  Also, there was the subject matter, songs about race, politics, religion, etc.  This was deep stuff and Louis responded with more seriousness and sensitivity than even Brubeck imagined bringing tears to those who heard Louis in the studio or those who witnessed the only live performance of The Real Ambassadors at Monterey in 1962.  I really think he considered it one of the highlights of his life (he dubbed it many, many times on his private tapes, right up to the end of this life) and proudly told reporters that Brubeck had written him ‘an opera.’”

-response to JazzProfiles interview question by author Ricky Riccardi, What a Wonderful World: The Magic of Louis Armstrong’s Later Years

Great things happen when Jazz greats come together and The Real Ambassadors is certainly one such result.

I’ve previously posted extensively about Dave and Iola Brubeck’s The Real Ambassadors which they wrote as a tribute to Jazz in general on the world stage and its “real” ambassadors of goodwill - the Jazz musicians who made a number of such tours abroad in the 1950s.

Prominent among them was Ambassador Satch, Louis “Pops” Armstrong, who featured in The Real Ambassadors  - “the opera the Brubecks wrote for me” - along with Carmen McRae, Lambert Hendricks and Bavan when said “opera” made its debut at the Monterey Jazz Festival in 1962.

Thanks to a friend based in Canada, I have a copy of the program from the 1962 Monterey Jazz Festival marking the original performance of The Real Ambassadors. Sadly, this unique extended composition was never performed again in its entirety by these musicians.

I’ve placed the graphics from the 1962 MJF brochure throughout this piece and copied out the text to make it more readable for you. Incidentally the music on The Real Ambassadors [Columbia CK 57663] recording was done in the studios in 1961 when Annie Ross was a part of the vocal trio with Dave Lambert and Jon Hendricks and released in 1962. 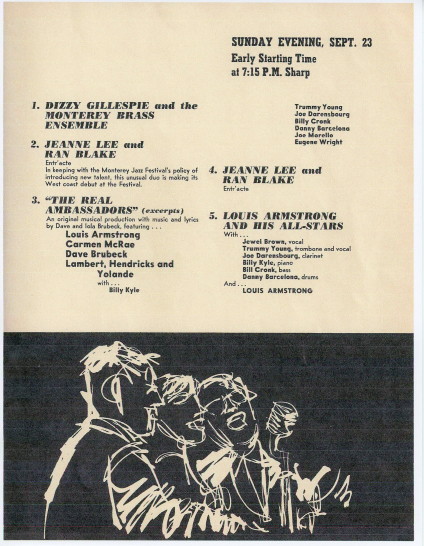 The theme of "The Real Ambassadors" is contained in the title. Louis Armstrong, Brubeck, Dizzy Gillespie — all of whom have made extensive and highly acclaimed overseas tours under the auspices of the U, S. Department of State —- are the "real ambassadors" representing America to foreign peoples. And since jazz has become an international language and a force for world understanding, it may well be that the very phrase "foreign peoples" will one day become happily archaic.

On the closing night of the Monterey Jazz Festival, Sunday, September 23 (at 7:15 p.m, sharp), one of the most ambitious and unusual programs ever presented on any festival stage will be given its first public performance.

Excerpts from the original musical production "The Real Ambassadors," with music by Dave Brubeck and lyrics by lola (Mrs. Dave) Brubeck will be presented. Heading the cast will be Louis Armstrong, Dave Brubeck, Carmen McKae and the Lambert, Hendricks and Yolande Trio.

The internationalism of jazz serves as a unifying theme of the new Brubeck musical, and for the 1962 Monterey Jazz Festival as well. Lalo Schifrin's "New Continent" which has its world premiere on opening night, and Dizzy Gillespie's "The Relatives of Jazz," on Sunday afternoon both have as their subject the universality of jazz. The appearance of Israel's Yaffa Yarkoni, Ceylon's Yolande Bavan, Brazil's Bola Sete, Argentina's Lalo Schifrin, and Cheraw, South Carolina's Dizzy Gillespie! make this Festival a truly international spectacle. 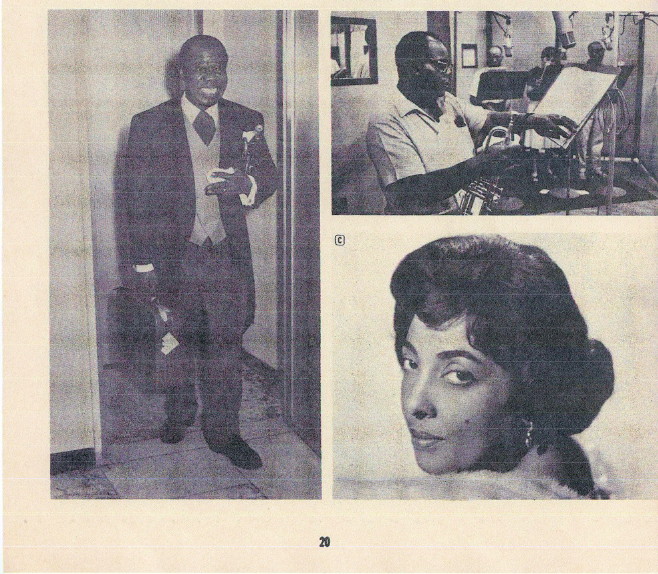 Known primarily as a pianist and leader of the poll-winning Dave Brubeck Quartet, the scholarly, serious Brubeck is coming to be recognized as an important jazz composer. Many of his songs, like "The Duke" and "In Your Own Sweet Way," are becoming modern jazz standards, having been incorporated into the repertoire of Miles Davis, Gil Evans and other major figures in the jazz world.

lola Brubeck, a gifted actress, poet, writer and mother of the five Brubeck children, has written all of the lyrics to Dave's songs. 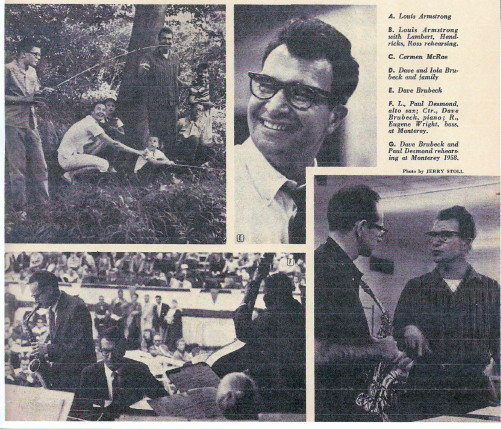 Recorded in its entirety by Columbia Records (the Festival can only present excerpts) "The Real Ambassadors" includes the following songs: EVERYBODY'S COMIN'

REMEMBER WHO YOU ARE

MY ONE BAD HABIT

KING FOR A DAY

ONE MOMENT WORTH YEARS

SINCE LOVE HAD ITS WAY

I DIDN'T KNOW UNTIL YOU TOLD ME

In Cincinnati a few weeks ago, Dave and Louis got together for a little advance rehearsal for their Monterey appearance. If the audience has half as many kicks as they did, "The Real Ambassadors" will be remembered as a high point during the five year history of the Monterey Jazz Festival. 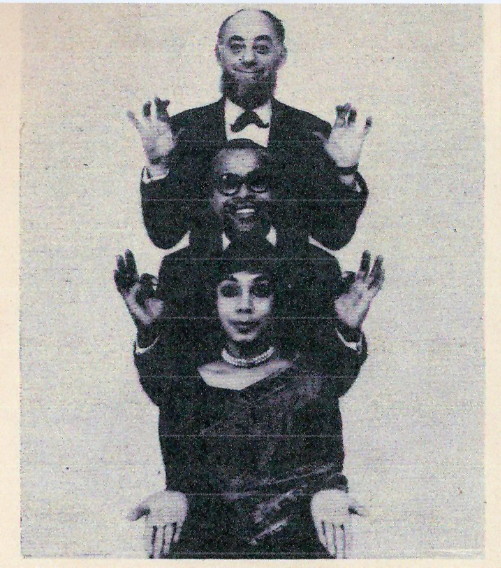 So listening to The Real Ambassadors sends you off to the record collection searching for when you first heard these tunes by the Dave Brubeck Quartet. [Just to prove, of course, that either you’ve still got it, or you’re not losing it – depending on your point-of-view.]

For example: I Didn’t Know Until You Told Me, a feature for Carmen McRae with Pops harmonizing the ending, was originally Curtain Time from the quartet’s Jazz Impressions of the U.S.A. about which Dave wrote:

“Curtain Time is like a pencil sketch of Broadway, a mere suggestion of what the full-color painting should be with strings, brass and the full complement of a theatre orchestra. All we have here of the real pit band is the soft tinkle of the triangle in the opening bars. The rest of the or­chestration is for you to paint as the four of us try to conjure some of the excite­ment and glamour of a Broadway musical at curtain time.”

The piece retains its lightness and gentleness when Carmen performs it as I Didn’t Know Until You Told Me and having Pops do the harmony at the end is so unexpectedly perfect – a moment in time.

Carmen also is the primary vocalist on In the Lurch, which adds lyrics to Dave’s Two-Part Contention, previously performed on Brubeck Plays Brubeck [Columbia CK-65722] solo piano album and is also a featured piece by the quartet on their recording from the group’s 1956 appearance at the Newport Jazz Festival [Columbia CL 932; SRCS 9522].

Mercifully for Carmen, the structure of In the Lurch is revised a bit from this description by Dave of the more complicated original:

"Two-Part Contention is divided into three sections, marked by three tempo changes. The first is a medium tempo; the second, slow; and the last, a fast tempo. The written portion of this tune is heard in the opening 32 bars. These two melodic lines are repeated throughout the piece. In the second section (slow tempo) I introduced a pattern of answering the right hand with the left hand, abruptly changing the register of the piano. In the third (fast) section, I tried to improvise within the limitation of two lines in the first chorus.”

Everybody’s Comin’, the tongue-twisting, jaw-cracking opening track is based on Everybody’s Jumpin’ from the Time Out album [Columbia CK-65122] with the 6/4 time signature of the original replaced by a straight 4/4 call and response between Pops and the LHR that serves to summon the faithful to the celebration.

To my ears, one of the great surprises on The Real Ambassadors is Pops’ performance on Nomad. The original version of the tune is contained on Jazz Impressions of Eurasia [Columbia CK 48351] and features a sultry, very Middle Eastern sounding alto saxophone played by the late Paul Desmond over Joe Morello’s use of tympani mallets on tom toms.

As described by Dave, the effect he was trying to achieve in Nomad was “the intricacies of Eastern rhythms … suggested by … superimposing three against the typical Jazz four.”

This Nomad is taken at a slower tempo to give Pops a chance to enunciate its clever lyrics. Clarinet replaces the alto and Joe’s tom toms are subdued while the beat is carried on a tambourine. Pops sings the first and third choruses and then takes an instantly recognizable Satchmo trumpet solo on the middle chorus which switches to straight 4/4 time.

Yet, despite these changes, The Real Ambassadors’ Nomad still evokes Dave’s intent when he originally wrote the piece: “I tried to capture the feeling of the lonely wanderer. The steady rhythm is like the ever-plodding gait of the camel, and the quicker beats are like the nomadic drums or the clapping of hands.”

It’s a credit to Pops’ genius that he could take music that is so recognizably Brubeckian and make it his own without changing the inner spirit of the piece.

Oscar Peterson - The Canadiana Suite [From the Archives with Revisions]

© -  Steven A. Cerra, copyright protected; all rights reserved. Way back when, I never knew much about the comings-and-goings of Jazz arti... 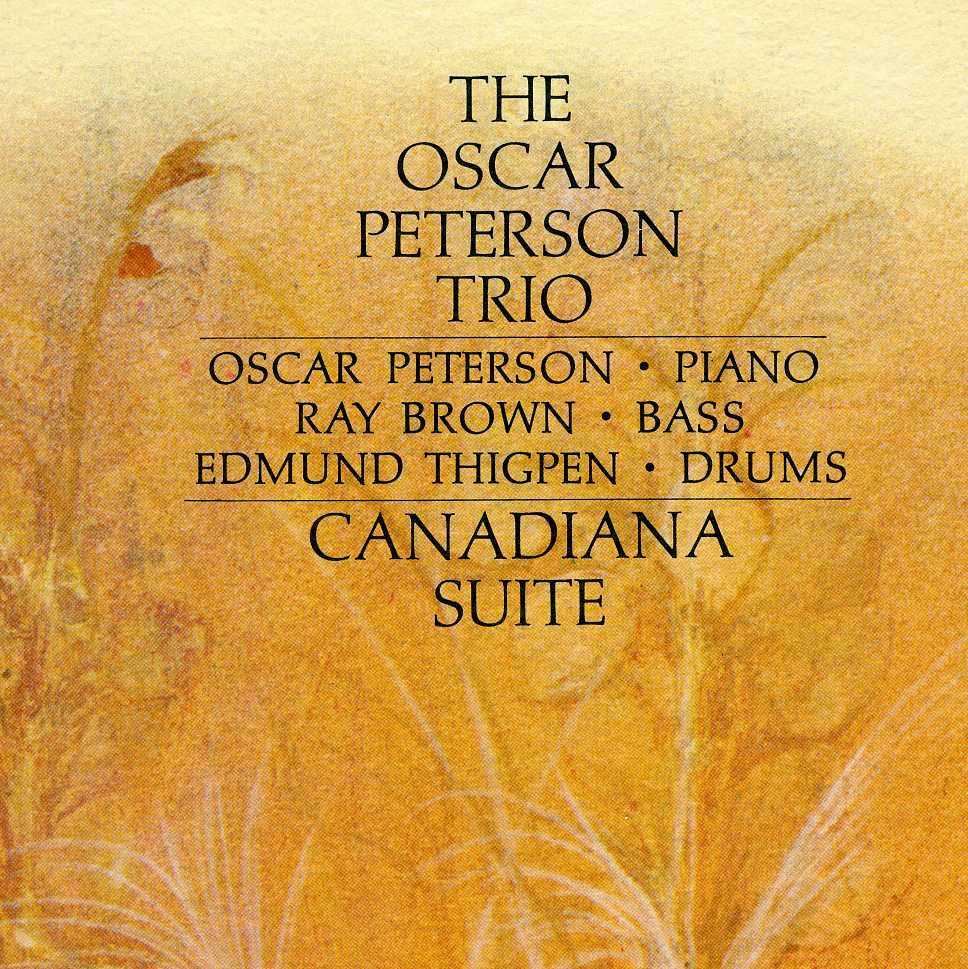