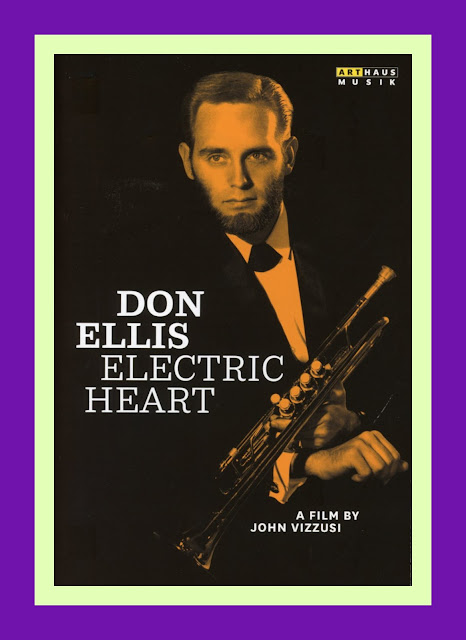 To one of the trumpet's tuning slides he attached a small microphone, which could be hooked up to amplifiers. Two years before Miles Davis established a trend for electric jazz with his revolutionary Bitches Brew, Don Ellis had already alienated the sound of his trumpet by connecting it to a variety of devices. Using the echoplex he could play duets with himself as extravagant cadences, such as in the soaring, impressionistic ballad Open Beauty (on Electric Bath), or his cover of the Beatles song Hey Jude (on At Fillmore). In certain solos he introduces distortion, grunting parallel octaves or amusing sound kicks with an Oberheim ring modulator and Conn Multi-Vider. His arabesque trumpet style was heavily influenced by bebop linearity. With high-speed arpeggios and striking staccato patterns, he found his way around the complex rhythms with great virtuosity.
Don Ellis also had a Superbone (a hybrid trombone with valves), a Firebird trumpet (with trombone slide) and a four-valve flugelhorn, capable of reaching very low registers, such as in the ballad Loneliness (on Live At Montreux), a poetic gem. Unsurprisingly, perhaps, Don Ellis was also an accomplished drummer. From 1970 onwards he played an active part in the band's drum rota and gave himself the lead role in his composition The Devil Made Me Write This Piece (on Soaring). Not long afterwards, however, Ellis was forced to give up playing drums - and even cut down his solo activities as a trumpeter - on account of a weak heart. He suffered a heart attack in 1975, from which he made a very slow recovery. He made a return to the stage in February 1978 with a quintet at the first Jazz Yatra in Bombay. But on 17 December 1978, Don Ellis died of sudden heart failure at his home in Hollywood.
Throughout his relatively short career Don Ellis was immensely productive and his music met with an enthusiastic response. Appearances on television shows in the United States and Europe as well as regular tours strengthened his reputation as an innovative musician. He composed around 250 titles, by no means all of which were released under his name on his 18 LPs (now also available as CDs). Posthumous releases include Pieces Of Eight, Live in India and Don Ellis and the Wojciech Karolak Trio live at the Jazz Jamboree 1962, Warsaw (Polish Radio Jazz Archives). Several of his albums were nominated for a Grammy, although it was the score he wrote for the thriller The French Connection which finally won him the prestigious award in 1972.
Don Ellis was always at the forefront of progressive jazz trends; he even managed to transcend them without disowning the tradition of his role models Duke Ellington, Stan Kenton and Dizzy Gillespie. Less well known is the fact that Ellis played trumpet in the Frank Zappa song Brown Shoes Don't Make It (on Absolutely Free), jammed with the prog rock group Emerson Lake and Palmer, and was also a recognised figure in the classical scene: he composed Contrasts For Two Orchestras And Trumpet for Zubin Mehta and the Los Angeles Philharmonic, and when Leonard Bernstein recorded Music Of Our Time in 1962, Don Ellis teamed up with Barre Phillips (b) and Joe Cocuzzo (dr) to form the trio for Improvisations For Orchestra and Jazz Soloists by Larry Austin.
Twice, in 1967 and 1968, he made guest appearances at the Berlin Jazz Festival, where he fronted a hugely successful programme with a dream band in 7-time that included Reach - Cantata For Choir. Orchestra And Trumpet. However, although the impact of his ideas and his charismatic personality were spectacular during his lifetime, it is only in recent years that the music of Don Ellis has again become the focus of closer attention.
Now for the first time we have an opportunity to enter his complex laboratory of meters and sound experiments - thanks to John Vizzusi's film biography: Don Ellis - Electric Heart (The Man his Times and his Music), which tells his life's work through specially recorded interviews with colleagues, including Maynard Ferguson and Gunther Schuller, and authentic concert recordings. In this way the jazz world is able once again to benefit from Don Ellis's rich legacy.”
It isn't often that the work of a Jazz artist of the magnitude and complexity is comprehensively rendered in a video format. Do yourself a favor - don’t miss the rare opportunity to do so as represented in John Vissuzi’s professional produced Don Ellis - Electric Heart (The Man his Times and his Music).
Here’s an excerpt: