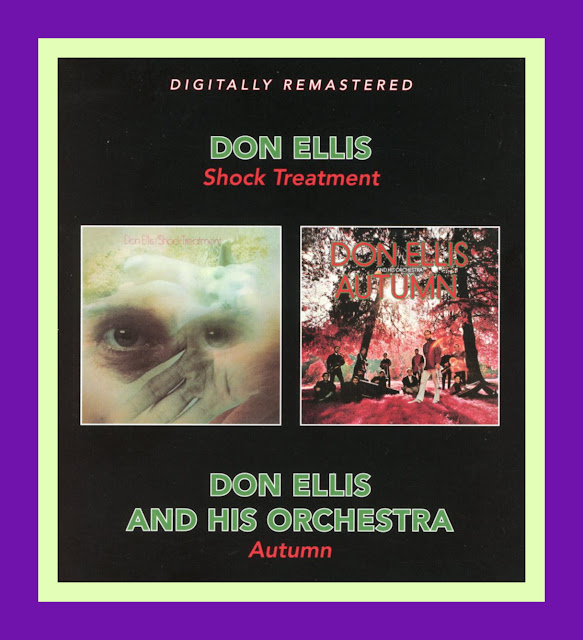 “Don Ellis is often associated with Ornette Coleman, John Coltrane, and Cecil Taylor as a proponent of the avant-garde jazz of the late 1950s and early 1960s, However, he generally avoided a radical free-form style, seeking instead to infuse traditional big-band styles with novel or exotic influences, particularly in his use from 1964 of Indian and Near Eastern rhythms. Because he sometimes employed serial and aleatory procedures in his earlier style he has also been identified with the third stream movement; later he renounced these approaches.
Ellis's significance to jazz composition lies in his pioneering use of various techniques and resources: complex meters, the electronic distortion of timbre, amplified trumpet, and the human voice used instrumentally. Perhaps his most important contribution was the use of quarter-tone melodic structures, particularly his invention of a 12-pitch quarter-tone scale for notating blues-type melodic variants. In 1975 Ellis consolidated his experience in this area in the textbook Quarter Tones, just as he had earlier brought together his rhythmic experience in The New Rhythm Book.
As a trumpet player Ellis possessed an agile technique and a fine tone. Influenced by Dizzy Gillespie, Fats Navarro, and Clark Terry, he evolved a personal, innovative style, often applying electric amplification and ring-modulated modification to the timbre of the instrument. From 1965 he showed an interest in alternative tuning systems - partly as a result of his interest in the music of Harry Partch - and acquired a quarter-tone trumpet which allowed him to achieve a new subtlety of expression, particularly in traditional blues passage-work.”
- Robert Dickrow, in Barry Kernfeld,Ed., The New Groove Dictionary of Jazz.
As I noted in the introductions to Parts 2 and 3 of the features on the evolution of the Don Ellis orchestra, because Don Ellis [1934-1978] is almost a forgotten figure forty years after his death in 1978, many of his recordings were out of print.
But given Ellis significance as a musician, BGO, a redoubtable UK reissue label, aimed to rectify what is a profoundly disappointing situation by offering twofers combining six of Don’s most significant albums:
[1] Don Ellis at The Fillmore/Don Ellis Goes Underground
[BGO CD 1143]
[2] Tears of Joy/Connection
[BGO CD 1317]
[3] Shock Treatment/Autumn
[BGO CD 1333]
Each of these two-fers contains a wealth of information in the booklets that accompany them comprised of remarks by Don himself and Jazz critics which formed the liner notes to the original LPs, as well as, by noted authorities on the historical significance of Don, his band and his music.
Combining it all into one feature would be overwhelming for the reader.
So the editorial staff at JazzProfiles has decided to take each of these two-fers and make then into separate features - Parts 2,3 and 4 - of “The Evolution of the Don Ellis Orchestra.”
Part 2 focused on [1] Don Ellis at The Fillmore/Don Ellis Goes Underground  [BGO CD 1143]
Part 3 focused in [2] Tears of Joy/Connection [BGO CD 1317]
Part 4 continues by reviewing in detail the third BGO two-fer Shock Treatment/Autumn  [BGO CD 1333] and sharing the annotations contained in the accompanying booklet. 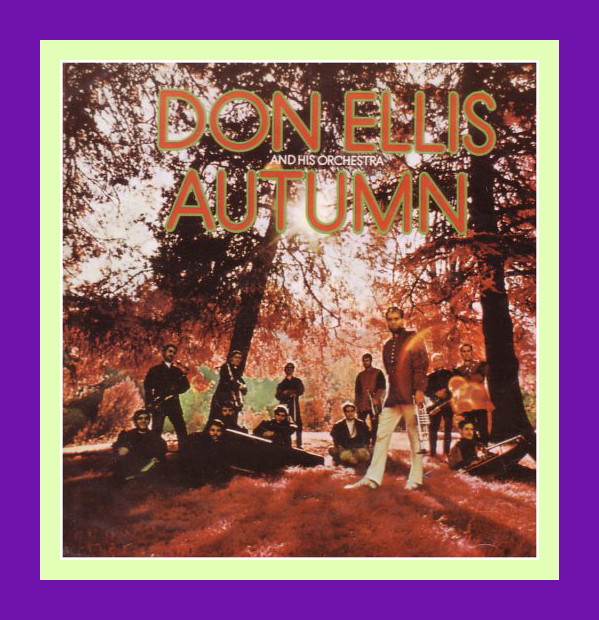 Al Kooper served as the producer for Autumn and wrote these liner notes for the original LP which was released on CBS in 1968.
“I REMEMBER the day that Clive Davis, President of CBS Records, brought Don Ellis into my office. I owned both his LPs, Electric Bath (63230} and Shock Treatment (63356), and might be considered a fan by anyone's standards. I remember when I was in Blood, Sweat and Tears and I brought Electric Bath to a rehearsal and played it for everyone. I remember noting with flattery the way our albums were often reviewed together and we were called bands moving in the same general direction. But most of all, I remember seeing the Don Ellis band perform for the first time.
The day after I met Don, I journeyed with him in the band bus to Tanglewood where the band was sharing the bill with the Modern Jazz Quartet and Judy Collins. During the five-hour bus trip we talked of many things. I learned about Don's fierce dedication to his music, his concepts and his plans for a forthcoming album. We arrived at Tanglewood and I was surprised to see that Don was closing the show. He was in pretty heavy company and yet no one objected or thought twice about it. I found out why the moment they walked on stage. The band is outfitted by a local (LA) hip clothing store and they all wear velvet-satin puff-sleeve affairs with white turtlenecks beneath. To see them alone is an experience. To hear them... well, words cannot describe blah blah blah... I was so impressed with that evening's performance and the standing ovation and the two encores that I swore that the band must be recorded live at some time in the near future. The band was to leave for Europe the next day, and Don and I made plans to record a new album when they returned.
Upon returning from Europe the band was booked into Boston and then into Stanford University in Palo Alto, California. I was to meet Don and record the band live at Stanford. Don came out a day early to check facilities, etc., and was quite shaken. They had had to cancel the Boston gig because their instruments had not yet arrived from Europe. Frantic calls were made all that day, and I believe they arrived scant hours ahead of the concert. We had our recording equipment ready to go and I was a little frightened myself. The result of this hang-up was that most of the musicians were dying to play, itching to get a hold of their instruments which had been denied them for almost a week. The result of this set of circumstances are 'Indian Lady' and 'K.C. Blues'.
On 'K.C. Blues' Frank Strozier is heard on alto introducing the tune and playing the open choruses. He is followed by John Klemmer on tenor sax and Pete Robinson on Fender piano. The tune, Don says, is based on a classic Charlie Parker solo.
'Indian Lady' first appeared on the Electric Bath album, but the tune had undergone so many changes I suggested we include an updated live version: Don is featured on trumpet, Glenn Ferris on trombone, Pete Robinson on Fender piano, and two brilliant duels. The first is "between" Ellis' two tough tenors, John Klemmer and Sam Falzone. The playing started out on an extremely high level and by the time five minutes passed by I was amazed as they screamed out together through five or six choruses, even putting the band through an impromptu dixieland pseudo-waltz section. You can tell by the audience reaction how it went down and you can barely hear the beginning of the other duet between Ralph Humphrey and Gene Stringing, two of Ellis' trio of outstanding percussionists.
The remainder of the album was recorded in Studio A, CBS Records, Hollywood, by Brian Ross-Myring, who also picked up the Stanford Concert. Ross was the engineer who worked on Don's previous albums.
'Scratt And Fluggs' is sort of a breakdown in 5/ 4 time with the various sections taking up banjo and guitar lines. Don is featured on trumpet and Pete Robinson on tack piano with some curious left-hand work.
Various friends and wives were allowed to cheer the band on. I am responsible for falling over the music stand at the end.
'Child Of Ecstasy' is a Don Ellis composition showcase for lead trumpeter Glenn Stuart. It's a mysterious blend of Eastern and Western mini-influences and features some dazzling pyrotechnics by Glenn.
'Pussy Wiggle Stomp' is a Don Ellis soul tune which is quite different from anybody else's soul tune. It's a 7/4 look at some gospel changes with a recurring theme. Pete Robinson is heard on piano, Sam Falzone on tenor and Ralph Humphrey on drums. This is an especially rewarding track for me because I think we captured some of the band's best playing ever which is so hard to do in the studio. A highlight of this is Don's trumpet solo which jumps octaves and trucks right along even when the band tacets except for some syncopated hand clapping. Humour is prevalent throughout the 47 false endings.
I save Variations For Trumpet' for last because it is a major work. It is divided into six sections which are as follows: Sec.1 - Theme; Sec. 2 - 5/4; Sec. 3 - 9/4; Sec. 4 - 7/4; Sec. 5 - 32/8; Sec. 6 - Theme and Coda.
This is Autumn for Don Ellis and his orchestra. It shows a maturing and cohesiveness far beyond its time (pardon the pun). It is not a cold, steely album. It is quite human; sometimes sad, sometimes joyous, occasionally humorous and variously frightening. But it is, I believe, the sound of our time.”
Al Kooper, 7968 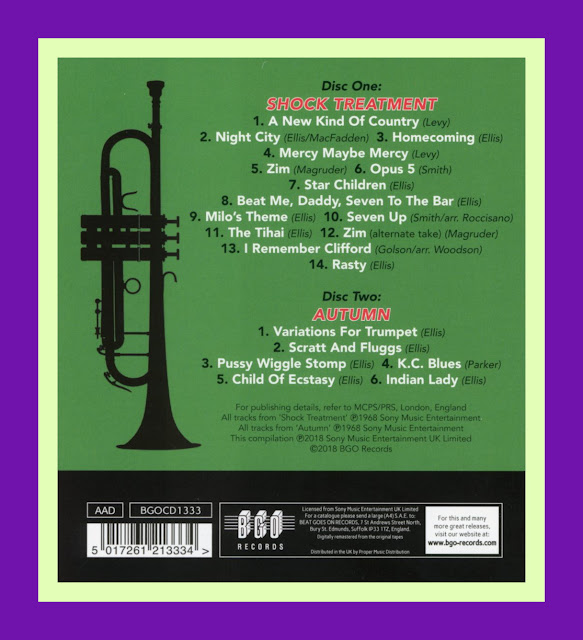