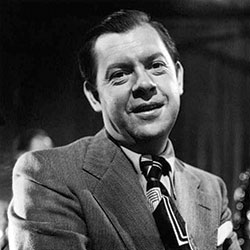 I found the following in the Down Beat online archives [http://downbeat.com/news/detail/pre-birth-of-the-cool-claude-thornhill visited 8/11/2021] and wanted to share with you its many insights into how the commonly referred to “Birth of the Cool” or just “Cool School” jazz sound evolved primarily through the work of pianist and bandleader Claude Thornhill and his close arranging associate, Gil Evans.

“In the decades following World War II and the decline of the swing era, the query “Will the big bands ever come back?” was bandied about by older critics and jazz fans. The notion of a large ensemble has become cool again, with younger composers and arrangers such as Darcy James Argue reinventing the concept and adapting it to contemporary instrumentation.

With that in mind, it’s worth taking another look at a bandleader whose impact started 70 years ago and continues today [June 25, 2012] — Claude Thornhill.

Thornhill’s 1940s big band helped shape the sound of modern jazz, and orchestral bop and ethereal ballads tinged with classical influences set the stage for masterpieces by Miles Davis and helped to inspire the West Coast or “cool jazz” movement of the 1950s. Thornhill and collaborator Gil Evans created a beautifully colored and sophisticated tapestry of music that would be referenced and known around the world.

The birth of the cool began in Thornhill’s hometown of Terre Haute, Ind., a city on the Wabash River where Thornhill was born Aug. 10, 1908. The shy-but-gifted boy was a prodigal pianist, playing as a teenager in movie houses, on riverboats and with local orchestras. The Terre Haute Star, somewhat prophetically, called him “years ahead of his time in the playing of modern popular music.” Thornhill later claimed that he had attended various conservatories, but his talent flourished locally in a city with a top-flight classical symphony and vibrant musical culture.

Thornhill left Terre Haute by the end of the 1920s and spent the next decade making a slow but steady climb to bandleader. He became good friends with a young, up-and-coming clarinetist named Artie Shaw, who described him as “a funny-looking gent, with a potato nose and round Germanic face…It wasn’t easy for him to express himself. But he was more guileful than he appeared, because he generally got what he wanted.”

Thornhill worked as an arranger and pianist with Ray Noble, as well as the first big bands of Benny Goodman and Glenn Miller. He played on several early Billie Holiday recordings, and he also gave Maxine Sullivan her first hit with an arrangement of “Loch Lomond.” A stint with popular light-classical music maestro Andre Kostelanetz’s radio orchestra would influence Thornhill’s later use of tonal color—and a Hollywood gig with bandleader Skinny Ennis was his key introduction to Evans.

By 1939 Thornhill was ready to start his own band, and he worked hard to develop an original sound—one that would evolve over the next 10 years, described by jazz writer Ira Gitler as “vibrato used sparingly to heighten expressiveness; trumpets and trombones that could imitate French horns; unison clarinets suggesting strings, and a masterful control of dynamics, which made the band sound strong when playing softly.” It evoked classical composers like Ravel, Berlioz and Thornhill’s beloved Debussy. The sound, as Gil Evans later remarked, hung like a cloud—or else it seemed to glide like one.

Thornhill’s most famous tune was one that he originally wrote as part of a suite for Ray Noble’s band in the 1930s, called “A Fountain In Havana.” In 1940, in need of a band theme, he pulled the composition out and gave it a new title that made its future as a holiday classic: “Snowfall.” Evocative and ethereal, “Snowfall” embodies its author’s lyrical, melancholy temperament. Another Thornhill composition, “Portrait Of A Guinea Farm,” reveals the composer’s notoriously quirky sense of humor and a willingness to venture into musical realms beyond the conventional confines of big-band music.

“Snowfall” and “Portrait Of A Guinea Farm” were both recorded in 1941, a significant year for Thornhill, because Evans joined his band. Evans was a brilliant arranger who expanded on Thornhill’s innovations in instrumentation and arrangement and added increasingly advanced harmonies. Evans, who became famous for his work with Davis, offered much of the credit for his sound to Thornhill, saying that he had given him a musical vision and an orchestra within which Evans was able to create something even more interesting and complex. An early example of Evans’ work with the Thornhill band is a breakthrough Thornhill-Evans tune called “Buster’s Last Stand.” Jazz writer Allen Lowe described “Buster’s Last Stand” as “a bravura swinger, unlike anything else of its time, a creation way outside of Swing Era conventions, block-voiced with feathery lightness and kicked along with the momentum of a tin can along a curb.”

In 1942, with America fully immersed in World War II, Thornhill broke up his band and joined the Navy. He spent some time playing piano with Artie Shaw’s Naval orchestra, but the two men’s friendship became strained, and Thornhill eventually left to lead his own band. By war’s end he wanted to reform his civilian orchestra, and because he was so liked and respected, he managed to get many of his former musicians back, including Evans.

The war had taken a toll on Thornhill, however, and more and more of the writing duties fell upon the shoulders of Evans. Given creative license by Thornhill, Evans took the orchestra in a more modernistic direction, incorporating bebop’s revolutionary new sounds into his charts.

Up-and-coming musicians such as Lee Konitz, Red Rodney and Gerry Mulligan all did stints with the band, and they recorded several bebop anthems (such as “Anthropology” and “Donna Lee”) that have become iconic moments in the Thornhill legacy. One such moment was “Robbins’ Nest,” which jazz writer Whitney Balliett described as “a classic instance of how the Thornhill band almost completely circumvented the big-band clichés of riffs, call-and-response patterns and empty counterpoint…There is a lot of fast and subtle rhythmic footwork on the recording, and Thornhill’s use of dynamics is exhilarating. Yet everything is quiet.” “Robbins’ Nest” and other

Thornhill recordings from this period point the way to the cool-jazz movement of the 1950s, founded with Davis’ Birth Of The Cool recordings at the end of the 1940s. Many of the tunes were recorded by a circle of musicians that included former members of the Thornhill orchestra.

At the same time, Evans continued the Thornhill tradition of classical influences and adaptations, and anticipated his own later work with Miles Davis on albums such as Miles Ahead and Sketches Of Spain through pieces like Tchaikovsky’s “Arab Dance” and Sebastián Iradier’s “La Paloma.” These recordings also foreshadow the rise of the 1950s Third Stream movement, in which composers and musicians began to consciously combine aspects of jazz and classical music into a single form.”