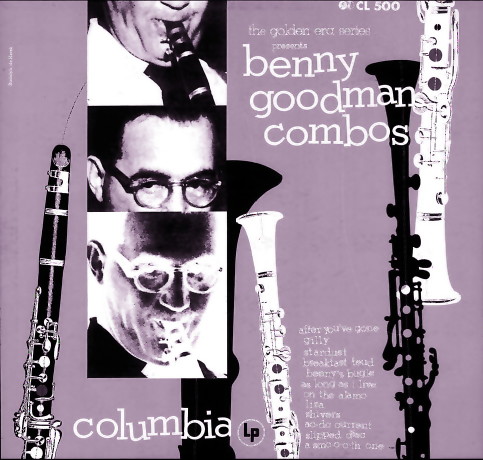 Not always associated with the nascent development of Jazz in the 1920s, Benny Goodman was involved in many aspects of it, including a four-year on-again-off-again stint with Ben Pollack’s influential band from around 1926-1929.

During that period and continuing into the early 1930s, Benny worked both as a freelance studio musician, as well as, an independent Jazz artist who recorded with many different bands before making the move to head up his own big band in the mid-1930s, a decision that led to his claim to fame as The King Of Swing.

The following is from the long time New Yorker Jazz writer, essayist and critic Whitney Balliett”s Goodbye and other Messages, A Journal of Jazz, 1981 - 1990, a collection of shorter pieces done during this period “for those players who are gone, those who are here and those to come.”

“Benny Goodman sometimes gave the impression that he would live forever. Like most prolific virtuosos, he was difficult to keep in focus. He made a pass at retiring when he was forty, but he kept reappearing with a new group or a new recording. He was the first important jazz musician to play classical music—a seeming trespass that caused bewilderment and concern among the faithful of both persuasions. His image gradually changed from severity (rimless glasses, patent-leather hair, business suits) to geniality (horn-rims, tousled hair, tweed jackets). He disappeared into his own legend, which decreed that he was a monster—a penny-pinching, thoughtless martinet, who bullied his sidemen and hogged the solo space. It was often said after he reached fifty that his abilities had declined. Yet, however uneven he may occasionally have sounded (he was plagued by depression and back problems), he played almost as well at the end of his career as he had at the beginning.

But Benny died in June [1986], at the age of seventy-seven, and perhaps it is time to tally the results. There were a lot of Benny Goodmans: the pioneer jazz virtuoso who made the clarinet as important a solo instrument as the trumpet was in the thirties; the unwitting and perhaps unwilling musical evangelist who, in 1935, introduced the young of this country to their own great native music, aerating their Depression lives and making them dance like Shakers,- the tough Chicago boy who married a Vanderbilt; and the second-generation Russian Jew who became one of the most famous of the many Russian Jews who have graced American music for the greater part of this century.

Goodman was the ninth of twelve children. His father worked in the stockyards, and his mother was illiterate. He studied with the classical clarinettist Franz Schoepp, who also taught Jimmy Noone and Buster Bailey. He joined the musicians' union when he was thirteen and Ben Pollack's band when he was sixteen. He worked for Pollack on and off from 1925 to 1929, in company with Glenn Miller, Jack Teagarden, Bud Freeman, and Jimmy McPartland. From 1929 to 1934, when he formed his first big band, he scuffled in New York, playing in Broadway pit bands and doing radio shows, and recording with everyone from Bessie Smith to Enrique Madriguera and Ruth Etting. In 1934, his band became one of three bands chosen to play on a weekly three-hour NBC program called "Let's Dance." "If anyone were to ask what was the biggest thing that has ever happened to me," Goodman once told this writer, "landing a place on that show was it." A year later, at the behest of his booker, Willard Alexander, he took his band on the road.

They played Pittsburgh, Milwaukee, Denver, Salt Lake City, and San Francisco without much success. But when they got to Sweet's Ballroom, in Oakland, the NBC show had begun to take effect, and there were lines around the block, and it was eventually the same at the Palomar, in Los Angeles, where they were held over for a month. They stopped at the Congress Hotel, in Chicago, on their way east, and stayed six months. They had the country jumping. Back in New York, they had a long engagement at the Hotel Pennsylvania, then went west again to do the Palomar and make a movie. They were at the Pennsylvania in the fall of 1936, and during the winter they made their uproarious appearance at the Paramount Theatre; the audiences, thoroughly worked over by Goodman's recordings and almost daily radio broadcasts, danced in the aisles, stood on their seats, and sometimes stayed through all five shows, In January of 1938, Goodman reached an apogee when, still the unwitting ground-breaker, he gave his famous Carnegie Hall concert. (It was a press agent's idea.) With the exception of Jess Stacy's "Sing, Sing, Sing" solo, the evening was not musically prepossessing, but the concert gave jazz a stature it had not had before.

For whatever reasons —perhaps it was an unconscious wish to keep the competition down within his band—Goodman never hired any first-rate trombonists or tenor saxophonists in the thirties. (Goodman could be inscrutable. In 1938, he borrowed Lester Young from Count Basie for a recording date, and in the course of six numbers allowed Young just one eight-bar solo.) This most famous of the Goodman bands was sandwiched between the frenetic trumpet playing of Elman and James and the heavy, here-we-go-down-the-pike drumming of Gene Krupa, with Goodman as its main soloist. The band never had the subtlety of Basie and Ellington and Andy Kirk. It was a very white band, and relied on bravado and muscle. It tended to shout when it played "Bugle Call Rag" and "King Porter Stomp," and to breathe heavily in slow ballads.

Goodman's next and most important band was altogether different. It began to take shape in the late thirties, after James and Krupa departed and Goodman switched from Victor to Columbia. He hired the lead trumpeter Jimmy Maxwell and, in the next year or two, the trumpeters Cootie Williams (from Ellington) and Billy Butterfield (from Artie Shaw), the guitarist Charlie Christian, the trombonist Lou McGarity, the pianist Mel Powell, and, in 1941, the bassist John Simmons and the drummer Sid Catlett. And the satiny arranger Eddie Sauter took over. But this graceful band didn't last long. Christian fell ill and died, Simmons and Williams left, Catlett was fired, Billy Butter-field went with Les Brown, and Mel Powell was drafted. The musicians'-union recording ban, which went into effect in the summer of 1942 and lasted almost two years, was the final stroke. Toying occasionally with bebop, which he never liked much, Goodman had a series of middling bands in the late forties. He had, by then, made close to a hundred recordings with his small groups, many of them among the finest of all jazz records. Then, crippled by the popularity of singers and by a

thirty-percent wartime entertainment tax, the big bands began to fail, and in 1948 Goodman gave up his band. The most successful part of his career was over; it had lasted just thirteen years. For the rest of his life, he put together a seemingly endless succession of big and small bands for State Department tours, for night-club gigs and television shows, for recording sessions, and even for a fortieth-anniversary celebration of his Carnegie Hall concert. This reconstituted evening remains vivid only because he had three pianists shuttling on- and offstage (Jimmy Rowles, John Bunch, Mary Lou Williams}, a girl singer he had first heard a week or so before, and a finale in which he sat down and soloed with his feet up on one end of Lionel Hampton's vibraphone.

Goodman played a demanding instrument with almost unfailing beauty for fifty years — an extraordinary stretch, unmatched by any other jazz musician. Buddy DeFranco once explained why the clarinet is hard to play: "The clarinet's three registers — chalumeau, middle, and altissimo—are built in twelfths. If you press the octave key on a saxophone, you go up or down an octave, but on a clarinet you go twelve tones — from, say, low F to middle C. Saxophones have pads over the air holes. When you press a key, the pad closes the hole and you get a note. Clarinets have seven tone holes and no pads, and you have to close them with the ends of your fingers. So you have to have absolute finger control. If any air escapes, you get a terrible squeak or no note at all. Going from the middle register of the clarinet to the altissimo is very awkward because the fingering changes completely. That's the reason so many clarinettists seem to lose control when they go into the top register, why they tend to shriek." Goodman had a full, even tone in all three registers. But it never got in the way of his playing. It never came first, as it often did in the work of Pee Wee Russell and Edmond Hall and Irving Fazola. He was a melodic improviser, and his attack — the snapping runs, the quick, almost epigrammatic melodies, the carefully screened emotion, the rhythmic surefootedness—invariably implied that he knew where his solo would land long before it got there. Goodman's style changed little. In the thirties and the early forties, he would occasionally growl and carry on, but later he abandoned such emotional yawing and became almost academic. After he married gentry and became a Connecticut gentleman, his playing always had a press [seemed somewhat forced].”