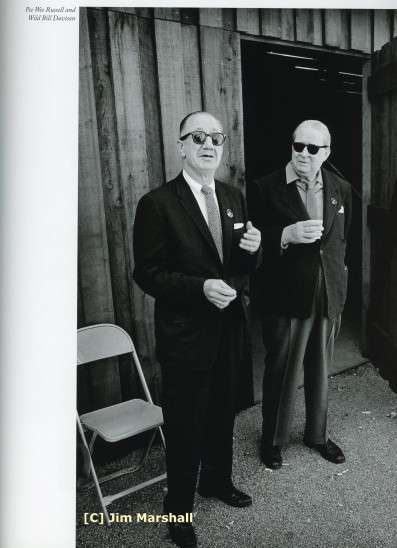 "I think Pee Wee, with all his nervous playing and without any facility, had more to say in the creative sense than any of the technicians and he became a world-famous figure because people would suffer with him. They'd say, 'Oh my God, I hope he gets through this chorus,' and this was his charisma, a powerful thing, really...In another hundred years, if there is another hundred years, people will talk more about Pee Wee's records than about Benny Goodman's."

“No jazz musician has ever played with the same daring and nakedness and intuition," Whitney Balliett wrote in a New Yorker profile of Pee Wee Russell. "He took wild improvisational chances, and when he found himself above the abyss, he simply turned in another direction, invariably hitting firm ground."

Gunther Schuller, America's preeminent jazz historian, also had high praise for Russell, saying that "he defined and exemplified what it is to be a true jazz musician....The unorthodox tone, the halting continuity, the odd note choices—are manifestations of a unique, wondrously self-contained musical personality....He was also one of the most touching and human players jazz has ever known.".

"His was the pure flame," Robert Hilbert writes of Pee Wee Russell. "Hot, gritty, profane, real. No matter what physical or mental condition Russell was in, night after night he spun wondrous improvisations. No matter how disjointed his life, how scrambled his mind, how incomprehensible his speech, his music remained logical and authoritative, elegant and graceful, haughty and proud." In Pee Wee Russell, The Life of a Jazzman, Hilbert does full justice to this remarkable figure in American Jazz.

It’s always fun to encounter attempts to explain the stylistic distinctiveness of clarinetist Pee Wee Russell in the Jazz Literature.

Describing Pee Wee’s sui generis approach to the instrument in particular and Jazz improvisation in general has been a subject written with the use of an infinite number of adjectives.

If anything underscores the difficulty of describing music with words it's trying to find a way to get one’s arms around what Pee Wee’s doing on the instrument.

“Pee Wee Russell, two weeks younger [March 27, 1906] than Frank Teschemacher, developed an even more stylized approach. The son of a St. Louis bartender and steward, Pee Wee — his formal name was much more elegant: Charles Ellsworth Russell —  studied piano, drums and violin in his youth, but began focusing on the clarinet in his early teens. Like Beiderbecke, with whom he later performed and shared a close friendship, Russell was expelled from boarding school before embarking on a jazz career. Russell later quipped: "I learned one thing: how to get where you're going on time."14

The only problem Russell faced after this dismissal was: where exactly to go? His travels over the next few years brought him to Mexico, the West Coast, Arizona, Kansas, Iowa, North and South Dakota, Texas (where he encountered Jack Teagarden), back to St. Louis (where he met Beiderbecke), and on to New York — indeed, almost anywhere a paying gig materialized. True to form, like several of the other noted "Chicagoans," Russell performed little in the Windy City, but was part of a St. Louis contingent that later developed strong ties to the Condon crew.

Some have suggested that Russell's eccentric style of improvisation defies description. Not true. Jazz writers have had a field day articulating and analyzing its mysterious essence. "Half B flat, half saliva," was Leonard Feather's characterization of the classic Russell tone, which was all part of a manner of phrasing that resembled "the stammering of a woman scared by ghosts." "Much of the time, his sound

was astringent," Nat Hentoff has explained, "as if it had taken a long time to find its way out of that long contorted body and was rather exasperated at the rigors of the journey" A number of commentators have looked for different levels of intent in Russell's work, almost as though it were a literary text in which the surface meaning and the symbolic meaning were at odds. "He sounded cranky and querulous," Whitney Balliett has asserted, "but that was camouflage, for he was the most plaintive and lyrical of players." Gunther Schuller goes even further in expostulating this theory of "the two Russells": "At first hearing one of these Russell solos tended to give the impression of a somewhat inept musician, awkward and shy, stumbling and muttering along in a rather directionless fashion. It turns out, however, upon closer inspection that such peculiarities—the unorthodox tone, the halting continuity, the odd note choices—are manifestations of a unique, wondrously self-contained musical personality, which operated almost entirely on its own artistic laws."20

Bud Freeman offers a far different interpretation of Russell's muse, reducing it to the classic Aristotelian concepts of pity and fear— with a slightly different twist: "He became a world famous figure because people would suffer with him. They'd say 'O my God, I hope he gets through this chorus.'"

Yet, whether his music is viewed as a Delphic utterance laden with secret meanings, an expression of eccentricity, or simply a style built around various limitations, Russell ultimately succeeded where it counted most: in attracting a devoted following, one that lived vicariously through his embrace of the unorthodox. For those fans who became part of the cult of Pee Wee, there was no other clarinetist half so grand.

Russell's playing revealed his taste for the bizarre almost from the start. On his 1929 recording of "That Da Da Strain," Russell opens his solo with a halfhearted attempt to imitate the florid and fluid clarinet stylings pioneered by the New Orleans masters. Alas, with meager success. After floundering energetically in this manner for three bars, Russell abandons this attempt at virtuosity, instead tossing out isolated notes and jagged phrases, offering up all the makeshift sounds — growls that end up as whimpers, staccato jabs that shadow box with the rhythm section, notes bent until they scream — that came to characterize the Pee Wee oeuvre. His celebrated solo, recorded that same day, on "Basin Street Blues," relies on a similar knack for raising aberrations to the level of a musical style, only here within the context of the twelve-bar blues. The combination is gripping: blues, the music of pathos, and Pee Wee, the master of the pathological, meet in a surreal halfway land, one where Dixieland and Dada gropingly join hands.

Throughout his career, Russell would return to the blues and, in a manner all his own, somehow manage each time to extract the inevitable bloody victory. But though the eccentricities of Russell's style might temporarily mask the fertile muse inspiring his efforts, they could never hide it. His work was especially effective when contrasted with another player with an equally strong sense of style: whether alongside Coleman Hawkins on "Hello Lola" and "One Hour," or decades later matching his wits with Gerry Mulligan or Thelonious Monk (who he "out-Monked," his fans insisted, with some justification).”