Doug in Holland with Marius and Eric 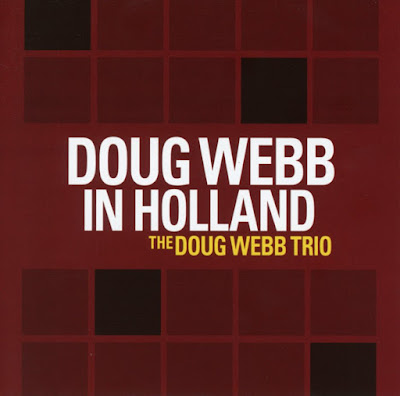 I recently reviewed new CDs by baritone saxophone greats Ronnie Cuber and Gary Smulyan on which they are accompanied by only bass and drums.

This combination of tenor sax, bass and drums immediately brought to mind shades of Sonny Rollins at the Village Vanguard with bassist Wilbur Ware and drummer Elvin Jones.

The challenge with horn-bass-drums becomes one of how do you keep 50 minutes of Jazz without chordal players - pianists and guitarists - interesting for the listener while at the same time guarding against a sameness settling in because of the limited instrumentation?

A number of factors are at work on this recording to maximize the former while minimizing the latter, among them:

- Three mature and accomplished Jazz soloists who have a lot to say in their solos and say it well: Webb with his Zoot Sims swing and Warne Marsh melodic and harmonic sensibilities all wrapped in a big Dexter Gordon sound; Marius with his meaty, booming bass sound and gift for framing the chords harmony with a precise choice of notes; Eric with his relentless drive, refreshingly alternating between sticks and brushes and creating 4 and 8 bar trades and occasional choruses that are musical and not just a display of drum technique

- Constructing arrangements around each tune, some featuring the bass in unison with the tenor, and creating a variety of tempos, riffs and interludes that keeps the listener engaged.

- Creating an in-the-room sound so that the intimacy of three instruments is not lost acoustically while at the same time, helping to bring the listener into the music [here, a nod to another of Marius’ skills as he also served as the recording engineer for the project]. 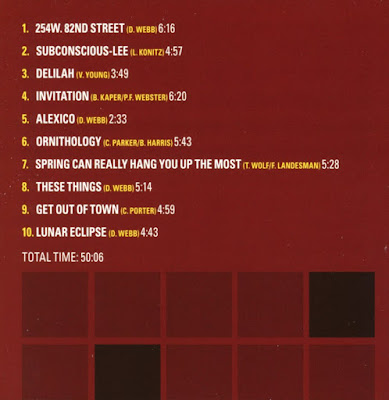 As was the case with the recent baritone sax, bass and drums CDs by Ronnie Cuber and Gary Smulyan, one soon realize how brave and bold musicians have to be to perform in these nowhere-to-hide formats.

But Jazz has always been about risk-taking; good Jazz, anyway.

I mean, who wants to hear the same tried-and-true licks played over and over again, ad infinitum, ad nauseum?

On Doug Webb in Holland: The Doug Webb Trio [Challenge DBCHR 75228], Doug, Marius and Eric step up, put their maturity and experience into play, and produce consistently interesting and exciting music that’s fun to listen to and full of what Duke Ellington referred to as “the feeling of Jazz.”

Here’s more background about the musicians and the music from Scott Yanow’s always informative insert notes to the CD:

“A maior saxophonist for decades who has mastered virtually every reed instrument from sopranino to contrabass sax and all types of flutes and clarinets, Doug Webb is best known for his tenor playing. He has appeared in a countless number of settings, working with Horace Silver, Freddie Hubbard, Stanley Clarke, Quincy Jones, the Doc Severinsen Big Band, and as a longtime member of the Bill Holman Orchestra in addition to recording for hundreds of films and television programs. But to hear him at his best, listen to Doug Webb with small jazz combos where he can really stretch out, such as the one featured on this release. 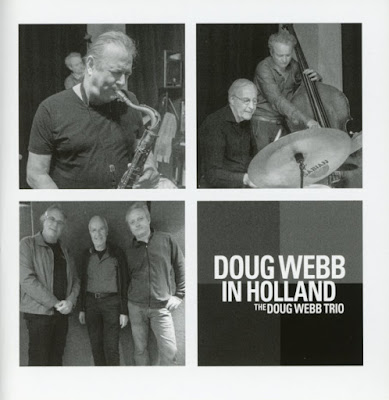 In 2015, Doug Webb toured Holland with veteran pianist Rein de Graaff's trio which included bassist Marius Beets and drummer Eric Ineke. "We did an extensive tour," remembers Doug, "something like 13 concerts in 14 days.
In 2018 I returned to play a gig, pick up a contra alto flute and a subcontrabass flute from world renowned flute maker Eva Kingma and record with Marius and Eric."

Playing with a pianoless trio presents some challenges that Doug Webb clearly enjoys. "I always like playing in this type of trio, I have much more freedom than in a larger group and I can play with a lot more energy to fill in the space. In college I played in pianoless trios all of the time and a big influence at the time was George Garzone and his group The Fringe. Eric Ineke is a great swinging drummer while Marius Beets is a wonderful bass player who adds a great deal to the music." Ineke, who has worked with Rein de Graaff for 35 years, has recorded along the way with such notables as Dave Liebman. Al Cohn. Barry Harris, George Coleman, Dexter Gordon and Ben Webster. He leads the Eric Ineke JazzXpress which has made many recordings for the Daybreak label. Marius Beets played with his siblings as the Beets Brothers and has worked with Rita Reys. Johnny Griffin, James Moody. Gary Bartz, Deborah Brown, Houston Person, Dave Liebman and many Dutch groups including the Metropole Orchestra and his own Powerhouse Big Band.

Doug Webb In Holland was recorded in 3,5 hours with nearly all of the released selections being the first take. "This album has standards, bebop tunes and a few originals that are mostly based on familiar chord changes. I simply picked out good tunes, many of which I had not recorded before."

The program begins with Doug's "254 W. 82nd Street," an original named after his mother's former address. The medium-tempo piece features the tenor-saxophonist stretching out over the driving bass and stimulating drums, giving his own take on the John Coltrane tradition. "Subconscious Lee." the classic Lee Konitz line based on "What Is This Thing Called Love," has Doug taking a solo worthy of Konitz or Warne Marsh. Here, as on many of the performances, Beets and Ineke take short solos that perfectly build off of Doug's ideas.

"Delilah" is a beautiful Victor Young composition that was immortalized in jazz by Clifford Brown's 1954 recording although Doug best remembers a live version with Eric Dolphy on bass clarinet and Coltrane on soprano. The bass and drum patterns uplift the new rendition that has Doug adding his own feelings and fresh ideas to the haunting melody. "Invitation" can be considered this generation's "Body And Soul" in that it is a song that nearly every tenor-saxophonist loves to play. Doug and his trio perform a cooking version filled with inventive ideas. Following "Invitation" is "Alexico." a soulful boogaloo blues that combines the words Alex (Doug's wife) and Mexico where they often take vacations. The catchy number is quite infectious.

"Ornithology," composed by trumpeter Benny Harris and made famous by Charlie Parker, features a unison melody by tenor and bass, and some swinging bebop statements including one of the best bass solos of the date. Doug Webb plays the melody of "Spring Can Really Hang You Up The Most" beautifully and tastefully adds some variations without leaving the memorable theme behind. He whips through a hot version of his "These Things" (based on "All The Things You Are"), digs deep into the still-modern chord changes of Cole Porter's "Get Out Of Town," and concludes this memorable set by performing his "Lunar Eclipse," an original based on a tune he wrote earlier called "Lunar" which in turn is based on the standard "Solar,"

The saxophonist sums up the session this way: "I try to do something a bit different on each recording that I make. I'm particularly excited about the performances on this record." Listeners will feel the same way about the spontaneous and inspired playing featured throughout Doug Webb In Holland.” 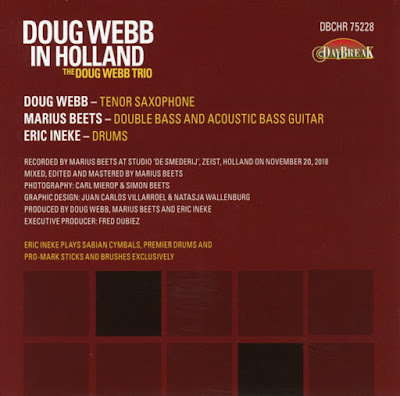