A Ferrari for Miles by Jimmy Lyons 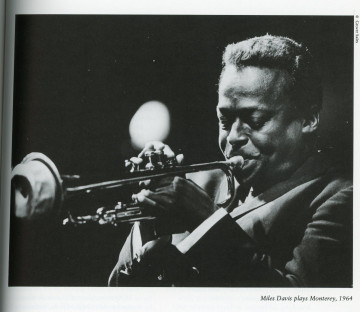 We continue our celebration of the Monterey Jazz Festival - now entering its 64th year as the longest continuous Jazz Festival -  with this anecdote from the “Jimmy Reminiscing” Dizzy, Duke, The Count and Me: The Story of the Monterey Jazz Festival by Jimmy Lyons and Ira Kamin, a wonderful collection of articles, vignettes and remembrances about one of of the great cultural events in the USA - the annual celebration of American Contemporary Music in one of the country’s most beautiful settings.

Accompanying the writings are a collection of drawings by the renown illustrator David Stone Martin who designed many of the iconic album covers for the Clef Norgan and Verve LPs in the 1950s, as we as, many photographs by Tom Copi, Jim Marshall, Veryl Oakland and a host of others.

A Ferrari in Monterey

“I have known Miles Davis since he was seventeen years old, back in '46 or '45, I guess, when he was playing third trumpet with Benny Carter's band. I bought him his first drink. There was a party for Duke Ellington out in Beverly Hills and Oscar Pettiford and I were the bartenders. Okay. So Oscar and I gave this kid a drink, the first drink he'd ever had, he says.

In the ensuing years I got to know Miles very well. I became very fond of the way he played and very fond of the guy, in spite of his irascibility. Miles was Miles. He came from a well-to-do family in St. Louis, a dentist's son or a doctor's son. He had a very good life. Miles, if you will, was a spoiled kid. But he was a good player and I loved the way he played. When Bird came through St. Louis he heard this kid play and he said, "You better leave town, kid, because you play too good to stick around here."

So the years went by. Pretty soon Miles played the old Blackhawk out here. For five years I said, "Miles, come play for me."

"Oh, who wants to play any dumb old festival? I can play any festival I want."

One time I said, "Come on, come down to Monterey. It's a beautiful country. You've never been there, you've never taken time off to relax a little bit. You're a New York kid. Don't sit around and fight with Columbia and have them buy you more apartment buildings in New York City to pay you off.

He looked at me and said, "You need the sunshine more than me."

Next year he came back to Blackhawk. We were standing outside. He said to me in that gravelly voice, "When's that damn festival?"

"September. I've been asking you for five years. You wanna play?"

So Miles flew down to Monterey. It was in 1962. He called New York and had them fly his Ferrari out. He had the time of his life, hanging out with everybody. He came out and played a marvelous set. Later he came roaring up from the bar. He had been hanging out with Dizzy and Harry James. I said to him, "You want me to give the money to Benny (Benny Shapiro, his manager at the time)?"

So I gave him $2,500 in cash. My wife was standing there and Miles took the money, folded it up and shoved it down her bosom. "Keep it for me; I'll pick it up later."

He came back at three in the morning, looking for his money. He thought he'd lost it.

That was Friday night. He hung around for the whole Festival. On Sunday night, Dizzy walked out on stage without a trumpet. I didn't know what had happened. Then Harry James and Miles Davis walked out with a pillow and handed Dizzy his trumpet on the pillow: Harry and Miles bringing out the master's trumpet.”