"The Rhythm, Romance, and Joy" of Erroll Garner by John Edward Hasse 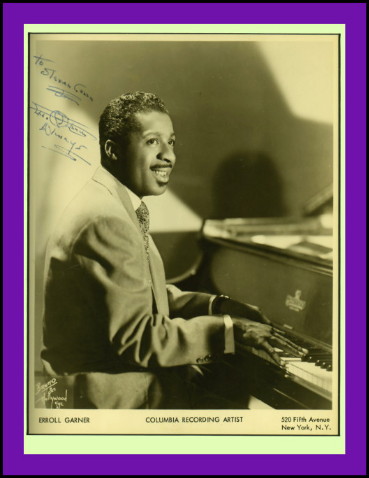 Born 100 years ago, the jazz pianist created an exuberant, one-of-a-kind style that continues to garner followers.

The following appeared in the June 17, 2021, print edition of The Wall Street Journal as 'Erroll Garner at 100.'

“This week marks the centennial of pianist and composer Erroll Garner, one of the most visible and beloved American pianists of the 1950s and 1960s. A joyful, exuberant and inventive artist, he attracted a large international following of listeners smitten with his readily accessible sound.

Born into a musical family in Pittsburgh, by age 10 he was part of a kid group on radio. Entirely self-taught, Garner joined a line of master jazz pianists associated with that city: Earl “Fatha” Hines, Mary Lou Williams, Billy Strayhorn and Ahmad Jamal. By 1944, Garner was in New York, performing in nightclubs.

Though he never learned to read music, he made no apologies: “Hell, man, nobody can hear you read.” Garner boasted matchless musical memory: He could play a piece after a single listen. Though his stature was diminutive—he would sit on phone books to reach keyboard height—his fingers were long and his handspan wide.

Garner shaped a signature style unlike any other. His ambidexterity and stunning sense of time enabled him not only to render and develop different rhythms in each hand, but also to play his two hands out of sync with one another. Garner often lagged his right hand slightly behind the swinging beat.

Concertizing with his preferred format of bass and drums, he would teasingly improvise a rhapsodic, free-form introduction—prompting the audience to wonder “What’s this tune?”—and even confound his sidemen. In a 1964 performance for the BBC, Garner roams through stride piano, boogie-woogie and a dash of dissonance—seemingly stumping bassist Eddie Calhoun —until, after 62 seconds, he finally breaks into “Honeysuckle Rose.” Such introductions were miniature spontaneous compositions.

Then with the drive of an engine, he’d strike a steady pulse in the left hand, often strumming guitar-like chords, while his right alternated between percussive single notes, chords, and octaves rendered with dazzling precision. His flying virtuosity suggested a third hand. While his ballads could be as flowery as a romantic garden, in pieces such as “I’ll Remember April” from his celebrated album “Concert by the Sea,” he seemed to be playing not a piano, but a full band, replete with solo lines, comments from the brass section, and full ensemble. “I love fullness in the piano,” Garner said. “I want to make it sound like a big band if I can.” In performances such as “Where or When,” from 1962, he employed the entire keyboard from low to high.

He dramatically varied his volume with split-second timing. In noisy nightclubs, drummer Kelly Martin recalled, Garner would play “softer and softer until finally his hands were actually just above the keyboard.” That would shush the loudmouths.

If you watch him in concert, you see a musician at one with his instrument—an extension of his musical mind and ultra-nimble fingers. Enabled by his spatial sense and muscle memory, while playing he might be smiling at his audience or looking at his sidemen instead of at the keys. You can instantly see and feel the wholesale, infectious joy he radiated to his listeners. Like classical musician Glen Gould and jazzmen Keith Jarrett and Bud Powell, Garner was wont to vocalize as he played piano: He emitted a low sound somewhere between grunting and humming.

To compose his nearly 300 pieces, he’d record them and then have another musician transcribe them. His “Misty” became a standard beloved especially by vocalists, for example Johnny Mathis and, in this 1964 concert, Sarah Vaughan. It played a pivotal role in Clint Eastwood’s thriller “Play Misty for Me.”

From 1955, the ebullient “Concert by the Sea,” recorded live in Carmel, Calif., was a masterstroke of marketing and packaging, the title and album cover evoking freshness and relaxation. You have to take “by the Sea” poetically, for the concert took place neither outside nor adjacent to the Pacific Ocean, but in a school auditorium a half-mile away. The album became a record-breaking bestseller. You can see why in this remarkable reading of the Ellington-Tizol standard “Caravan.”

In 1960, Garner and his longtime manager Martha Glaser sued music giant Columbia Records, charging that it didn’t fulfill its agreement to issue new albums and then released older material without Garner’s consent. The upshot was that Garner and Glaser started their own record company, Octave Records, liberating him from corporate control and striking a blow for artists’ rights.

A heavy smoker, Garner contracted lung cancer and died in 1977 at age 55.

—Mr. Hasse is curator emeritus of American music at the Smithsonian Institution’s National Museum of American History. His books include “Beyond Category: The Life and Genius of Duke Ellington ” (Da Capo) and “Discover Jazz” (Pearson).