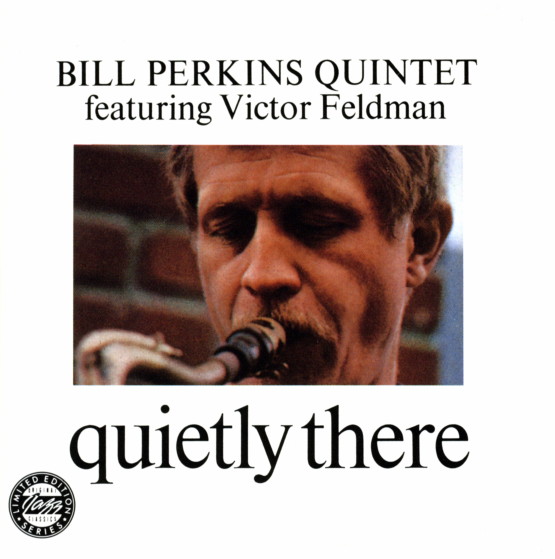 “This was one of only two sessions that the veteran West Coast reedman made under his own name in the 1960s. Genile, pretty, but closely thought out, this is easy-listening jazz as it could be at its best. The nine tracks are all Johnny Mandel compositions, and Perkins devises a different setting for each one, some decidedly odd: baritone sax and organ for Groover Wailin’, for instance, which mainly proves that Feldman was no good as an organist. But Perkins's grey, marshy tone makes a charming matter of The Shining Sea, the flute-and-vibes treatment of A Time For Love is ideal, and tempos and textures are subtly varied throughout. A welcome reissue of a little known record.”

I'm not sure what the exact connection was between this recording, which was made in 1966 for Riverside Records [and which I thought went out of business in 1963], Impulse Records, and Ed Michel, but perhaps some relatedness can be derived from the following paragraph from Ashley Kahn, The House That Trane Built: The Story of Impulse Records [2006]:

Ed Michel came to ABC in the late spring of '69 after years of both playing and recording music in the Los Angeles area. He had been bassist in the house band at the Ash Grove folk club, then was recruited by the Pacific Jazz label, where he learned all aspects of record production. Moving to New York City, he furthered his jazz studio experience as a production assistant for Orrin Keepnews at Riverside Records.”

However it came about, it’s great to have more Jazz interpretations of the music of Johnny Mandel, one of the greatest melody writers of all time.

In addition to their pedigree as performing Jazz artists, Perk, Vic, John, Red and Larry were all very much a part of the Los Angeles studio scene in the 1960s [and beyond] and no doubt played on some of the original scores that Johnny wrote for films when he was coming of age in the business during this decade.

All speculation aside, Johnny’s music is beautifully interpreted by all concerned and it is a shame that the recording has not had a wider circulation.

I love you for asking me to write notes for this album, but they aren't getting written. I'm stuck listening, thinking up terms such as "panoramas of talent" and other extravagances that don't read well. Could I make a speech about it somewhere instead of notes? No?

Then start with Johnny Mandel, who wrote all the tunes. The album captures a broad view of him. Johnny put in his acne years with people like Joe Venuti, Woody Herman, Count Basie. He loved the hard, big band sound that blew hair back off the foreheads of people who sat too close to the brass section. That Mandel phase comes through in young tunes such as Groover Wailin’, Something Different, and the inside jazz favorite, Keester Parade. Johnny turned lyrical later when he took the long walk from Arranger to Filmscore Composer, writing such melodic gems as The Americanization of Emily; The Shining Sea ("The Russians Are Coming"); and Quietly There ("Harper"). Two inclusions here are interesting in terms of Johnny Mandel's long range perspective: Just a Child—an early ballad that bears the promise of his later lyricism—and Sure As You're Born (from "Harper")—an up-tempo tune of the later period which leans pleasantly backward into the composer's big band roots.

A friend of mine said an interesting thing recently while listening to a Johnny Mandel song on the car radio: "His music doesn't make me sad, it just makes me want to cry." In the end, the value  of music is just this: that it moves you. That's why Johnny Mandel's music is important.

So much for the frame. On to the characters in the painting. Bill Perkins is one of the first jazz players that ever turned me on. The tune was Yesterdays, from a Stan Kenton album that helped make adolescence endurable on nights when everything hurt. I still find Perkins' rich, mournful tone unforgettable. How brilliant of you, Ed Michel, to have Perkins headline the group on these particular tunes. The sweet, sad, Perkins tone I love flows out in Johnny's loveliest ballads. The Shining Sea (my favorite on the album, with Perkins playing tenor sax) and A Time For Love. Perkins changes flavors by changing reed instruments, tempos, length of space between notes from one tune to the next. But what impresses is the center of the man's playing, the unchanged feeling that he loves to play.

Britain's Vic Feldman plays so many instruments so well that it's hard to keep up. He even plays organ here, a rare event (Sure As You're Born). I marvel at the fragility he reaches on ballads, but like his companions, Vic swings hard when it's time, his dynamic range equaling his versatility.

(Ed, are you still with me? I know you like short liner notes, but I can't make it. What do I say—"Here's a great little album, folks. Pick it up on your way to the cleaners and do your soul a good turn. Sincerely yours.")

John Pisano loved doing the album because he got a chance to play classical guitar as well as electric, and there aren't many such opportunities anymore. The classical guitar is a reflective instrument. Some of these tunes almost demand it. Pisano and Perkins get into a pretty effect on Emily, Pisano's single guitar line doubling Perkin's bass clarinet line on melody.

Both Larry Bunker and Red Mitchell have the happy facility of rhythmic appropriateness. What the tune calls for is what they give it. Both are superb players, ready to plant time or elaborate upon it, but beyond ego trips which distract lesser rhythm players. For me, no one understands the art of playing with brushes better than Larry Bunker.

Every time a knowing record buyer's collection seems more or less complete, an album like this shows up and requires purchase and appreciation. Isn't that nice? But here comes The Shining Sea again. I want to finish this so I can give it my full attention. Words seem dry next to music.”