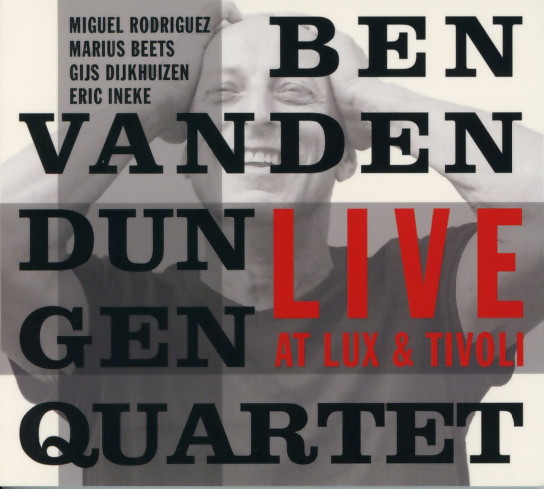 “With great pleasure and pride we present the new album of the Ben van den Dungen Quartet ”Live At Lux & Tivoli.” The album was recorded during two (livestream) concerts at the Lux Theater in Nijmegen and Tivoli Vredenburg in Utrecht. These concerts were part of the ”Tribute To John Coltrane” tour, with which the Ben van den Dungen Quartet has already played more than 50 concerts at various festivals and venues throughout the country.

The repertoire of the CD consists of songs inspired by classical works of the legendary jazz saxophonist John Coltrane. Familiar works that you might already know plus the twist of the Ben van den Dungen Quartet.

- The Jazz and Worldmusic Agency

“The first records that blew me away when I was trying to learn to play the saxophone were the Miles Davis Quintet's recordings of the two albums Cookin' and Relaxin'. The saxophone player in that band was John Coltrane. Those recordings - and Coltrane's playing on it - were a big influence on my initial development and the rest of my musical life. There were of course many other players that inspired me as well. In fact, all prominent figures in jazz history did. However, those recordings of Miles were, for me, the start of it all. John Coltrane has always continually inspired me, especially his sound and never-ending devotion to the music.

This is the fourth album of my quartet. It is not meant as a tribute per se, but rather it captures a moment in time where I found myself wanting to dive deeper into the music and heritage of John Coltrane. This album consists of two live performances of my band at LUX in Nijmegen and Tivoli in Utrecht, located in the Netherlands. It captures the essence of jazz: music being created in the moment.

Thank you to SENA PERFORMERS for making this recording possible.”

For many years, being able to play on the compositions of the late John Coltrane was akin to a litmus test marking the arrival, in the sense of having made it, to an elite level as a improvising Jazz tenor saxophonist. This ascension [my apologies to those more familiar with the Coltrane canon] has to do with the degree of difficulty that must be mastered in order to play Coltrane changes as advanced harmonic substitutions used in jazz improvisation.

In his seminal book on the subject of The Jazz Standards: A Guide to the Repertoire [2012], Ted Gioia explains how these “Coltrane changes” are at work in his examination of two of John’s more famous compositions: Giant Steps and Moment’s Notice.

"Giant Steps," first recorded by John Coltrane for his 1959 Atlantic album of the same name, quickly became famous in jazz circles —but more as an obstacle course than a favored jam session tune. The song "Cherokee" had played a similar role for the boppers of the early 1940s, weeding out the wannabes not ready for the demands of modern jazz. Think of "Giant Steps" as "Cherokee" on steroids.

“True, "Giant Steps'' was not as revolutionary as some of the more avant-garde offerings of the day. Coltrane's song stayed in 4/4 time, followed a i6-bar form, and did not veer outside the conventional boundaries of tonality. The chord progression borrowed many elements used previously by jazz players — listen to Richard Rodgers's bridge to the 1937 standard "Have You Met Miss Jones?" for an important predecessor. Yet at Coltrane's brisk tempo and with a few of his own ingenious harmonic twists added to the mix, this musical steeplechase presented a stiff challenge to an unprepared soloist, circa 1959.

Ah, Coltrane was quite prepared (...). The saxophone titan, for his part, had developed some handy improvisational patterns to employ on the song, most notably a repeated phrase that draws on the opening four notes of the pentatonic scale. Coltrane relies on this motif repeatedly in his solo, and close study of his improvisation reveals a certain rote quality to it.”

“Did John Coltrane think that casual listeners would notice that all 12 notes of our well-tempered scale show up as roots during the first 16 bars? Probably not. But he did know that the saxophonists who followed in his wake — no small crew, that — would be painfully aware of how quickly the chords were flashing by, and how unusual the harmonic landscape was in comparison with other songs of the day.

No, it's not as taxing as "Giant Steps," the obstacle course that Coltrane would launch on the world two years later, but "Moment's Notice" is still luxuriating in the harmonic maximalism that characterized this stage in the tenorist's evolution. Almost any melodic phrase or scale you rely on for soloing over bar one is unlikely to work for bar two — and this unsettling discontinuity continues for most of the song. Shortly before the final turnaround, Coltrane lets the improviser relax for a brief spell with only one chord change per bar blocking the road ahead. But this is merely time for a deep breath before the form returns to the top, and the battle begins all over again.

So it's a good workout, the musical equivalent of a full circuit around the Nautilus gym.” 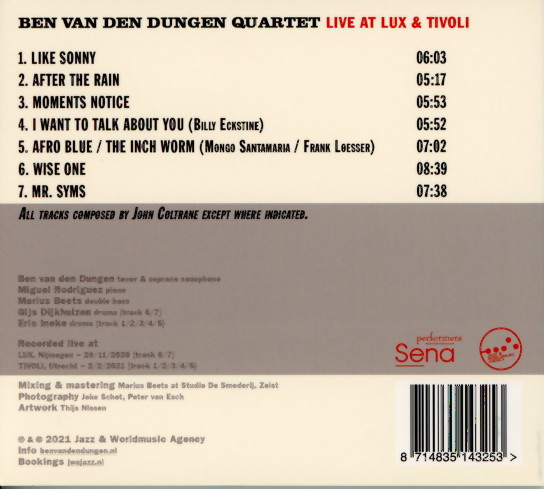 [Ben does not play Giant Steps on any of his recent quartet CD’s but he did perform it in 1988 as a member of Nueva Manteca on their Varadero Blues album and I have included a YouTube link to it at the conclusion of this piece.]

This a a prepared album in that Ben, along with pianist, Miguel Rodriquez, bassist Marius Beets, and drummer Eric Ineke [with Gijs Dijkhuizen, Ben’s regular drummer, in on tracks 6 & 7] have taken the time to create arrangements for each of the tunes and songs. In other words, it’s not a blowing session; a great deal of thought, planning and preparation has gone into the making of this recording and its shows in the consistently high level of creativity the music attains.

The other welcomed dimension is that it’s music is performed before an audience which always seems to give Jazz a special magic as the energy that the audience brings is transferred to the musicians which results in the quality of the music being kicked up a notch.

Although, five of the seven tracks are devoted to compositions by John Coltrane, it’s a varied program with ballads After the Rain, and I Thought About You, medium tempo cookers Wise One and Mr. Syms interspersed between up tempo burners such as Like Sonny, Moment’s Notice, and Afro Blue [which cleverly has Frank Loesser’s The Inch Worm added as a tag].

Throughout, the listener can revel in Ben’s big, bold and bountiful sound for in his hands, the tenor is appropriately named The Big Horn. While Coltrane chromatics, harmonics and chord substitutions are everywhere apparent in his playing, Ben never gets away from a powerful and primary swing in his soloing. He drives the music forward with a pulsating sense of urgency.

And while, for obvious reasons, ‘Trane is always a presence in Ben’s approach, you also hear a lot of Sonny Rollins, Dexter Gordon, and some occasional Johnny Griffin flights of fancy in some of the fast runs he incorporates into his playing. Ben is the real deal; he comes to play.

Throughout he is aided and abetted by a driving rhythm section of Miguel Rodriguez, Marius Beets and Grand Jazz Master Eric Ineke whose classic straight-ahead drumming is featured on two choruses of Moment’s Notice.

Miguel, Marius and Gijs Dijkhuizen have been with Ben on Ciao City [2013], A Night at the Club [2014] and 2 Sessions [2017] and have evolved into a very cohesive rhythm section, as well as, individually defined voices on their respective instruments.

In terms of the Dutch Jazz scene, Rodriquez is the relative newcomer in the mix, but he plays with a maturity well beyond his years, both as an effective accompanist and as a soloist whose inventions bubble over with seemingly endless ideas. As usual, Marius is his usual immoveable self: keeping time, framing the chords and contributing masterful solos on Wise One and Mr. Syms. And one wouldn’t have to look too far to find the next “Eric Ineke” in Dutch Jazz circles as drummer Gijs Dijkhuizen will ably fill that role.

Ben’s albums are always satisfying as the music on them quickly brings the listener into an atmosphere filled with the essence of swinging and sonorous Jazz. He envelops you in his music; it’s like he gives you the musical equivalent of a big bear hug.

You can sample this music on the Jazz and Worldmusic Agency website and locate order information by going here.