More Impulse! - Gil Evans "Out of the Cool" 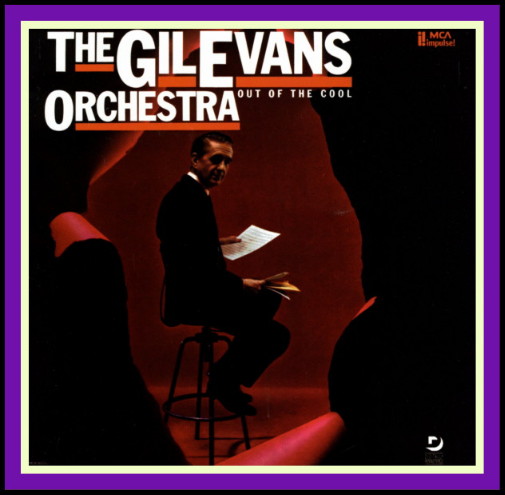 The editorial staff has previously written about Askey Kahn’s The House That Trane Built: The Story of Impulse Records which you can access by going here.

With so many recordings now available wholly or in part for sampling on Youtube, I thought it might be fun to return to Ashley’s book and dig a little deeper for annotations about some of my favorite Impulse! LPs and to populate them with audio links  via YouTube.

Let’s start with Gil Evans’ Out of the Cool which was issued in 1961 as the fourth album released by the label [A(S)4].

OUT OF THE COOL

“Though a familiar name in the jazz world through most of his career, arranger Gil Evans's recorded output was always limited; 1961 was a marked exception.

In October 1960, the Jazz Gallery, a new theater-sized venue in Manhattan, was the site of an unusually generous six-week engagement for Evans. It was his longest gig as a leader up to that point, enabling him to assemble a working group featuring such rising and risen stars as trumpeter Johnny Coles, saxophonist Budd Johnson, trombonist Jimmy Knepper, guitarist Ray Crawford, bassist Ron Carter, and drummer Charlie Persip. The extended gig also served as the launch point for Evans's debut on Impulse.

With the addition of drummer Elvin Jones on loan from John Coltrane's quartet, Evans took his fifteen-piece lineup into the studio and, as he later reported, "made the album in an afternoon." As Evans biographer Stephanie Stein-Crease writes, the album actually resulted from four visits to Rudy Van Gelder's studio; the three previous sessions were essentially rehearsals.

That Taylor had the insight and patience (and budget!) to allow Evans such license says much of the producer's confidence in the arranger's ability to eventually find his mark. Taylor recalls the album's fifteen-minute-plus centerpiece: " la Nevada' was not only original but was totally spontaneous  - Gil started noodling at the piano for a while, and he started this thing, and the rhythm section started doing something and then something sparked in Gil.

The other pieces were a little more arranged. But we didn't get any of them down until he got whatever it was on la Nevada' out of his system."

"La Nevada" was actually based on a 1959 tune Evans had called "Theme," but they had found their groove. In rapid succession, Evans and the group nailed the rest of the album—' the haunting ballad "Where Flamingos Fly," with an evocative Knepper solo; the tension-filled bass vs. horn section duel of "Bilbao," featuring Carter; George Russell's blues-based "Stratusphunk"; and Evans's own "Sunken Treasure," highlighted by the Spanish feel in Coles's pained phrasing.

Upon its release in early 1961, Out of the Cool (a title chosen by Taylor, slyly referencing Evans's involvement with Miles Davis's historic Birth of the Cool sessions), with a cover photo of Evans throwing a cool glance over the shoulder (shot by noted portraitist Arnold Newman), peeled away layers of obscurity and pushed the arranger into the mainstream. Before the year was out, Miles Davis's hugely successful Sketches of Spain, arranged by Evans, elevated Evans's reputation to a career high point.

"When he is not concerned with the requirements of a specific soloist (and sometimes even when he is)," enthused John S. Wilson in the New York Times, speaking of Out of the Cool, "Mr. Evans can weave patterns of colors, rhythms and dynamics with an individuality of approach and sureness of touch that have been matched in jazz only by Duke Ellington."

Beyond that, Wilson added, "Out of the Cool must set some sort of high standard for an introductory disk from a new label."

Email ThisBlogThis!Share to TwitterShare to FacebookShare to Pinterest
Labels: ashley kahn, gil evans, La Nevada, Out of the Cool